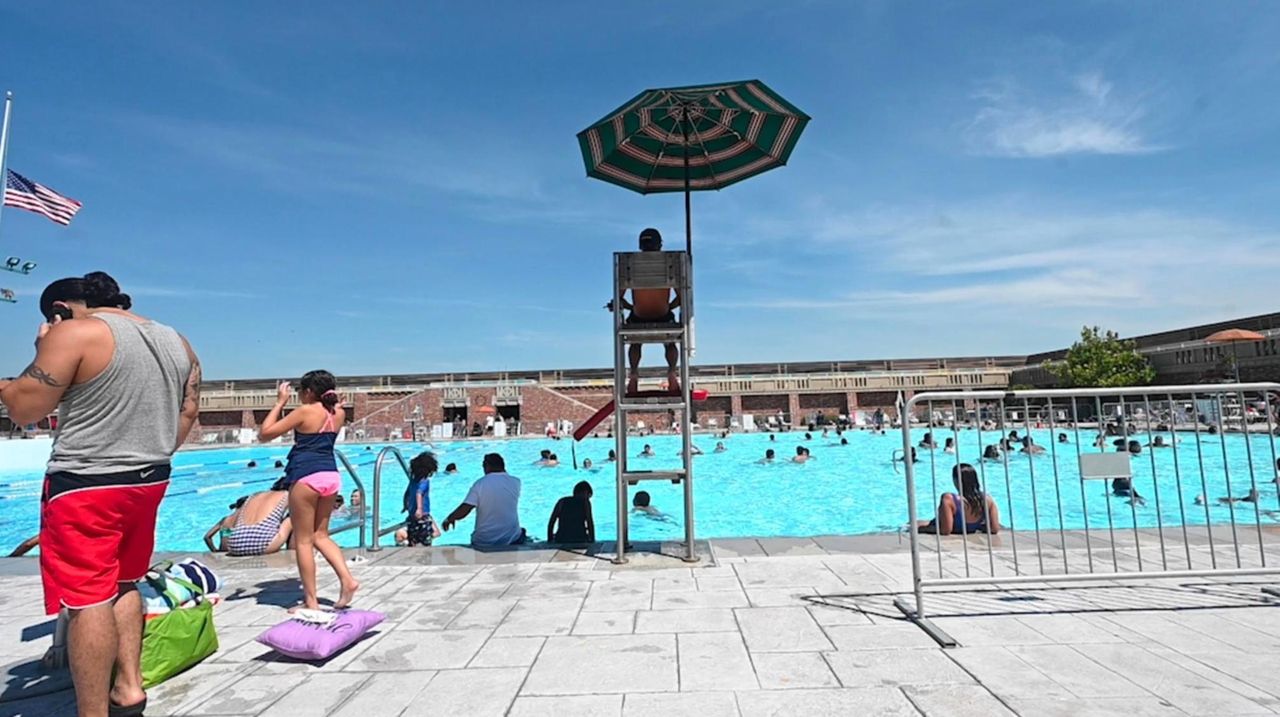 A lifeguard's job is hard enough during normal times but this summer it's even more challenging, dealing with taking precautions against the spread of the coronavirus. Credit: Newsday / Alejandra Villa Loarca

Long Island state beaches have about twice as many rookie lifeguards this summer — but rest assured, officials say, not only are many competitive swimming stars, they all have the “jump-into-action” personality that defines first responders.

And many of the new lifeguards have another attribute: They truly love the water.

“When we were quarantined … I really missed it,” Erin Quinlan, 17, of Lynbrook, whose favorite swimming stroke is the butterfly, said on a recent Saturday at Jones Beach State Park.

“It’s such a good summer job,” she said, contrasting her responsibilities and wide-ranging experiences with those of some of her friends working summer jobs in retail. “You always learn something every day.”

Some new lifeguards are following in their parents’ footsteps, including Brian Shtab, 24, of Little Neck, whose father, now retired from the FDNY, was a Jones Beach lifeguard for a quarter of a century.

Now an NYU graduate student in physical therapy, Shtab previously worked as a lifeguard at local pools, where he had a couple of rescues. This athlete, a runner, exemplifies how talent, skill and determination can lead to a spot in one of the nation’s most elite lifeguard corps.

“It’s good to train with people who are better than you,” he said.

The coronavirus prompted state officials to let veteran lifeguards skip this summer if they feared endangering their families or businesses, so just over 70 newcomers who passed an abbreviated test necessitated by the pandemic were hired, for a total of almost 500.

That worrying uncertainty adds to the usual stresses of keeping everyone safe, from the non-swimmers to the overly confident aquanauts.

“Just sitting in the stand, the anxiety — you’re kind of wondering: should I go in, should I not go in,” is how Quinlan described the extra tension caused by the pandemic.

Agreed Shtab: “The scariest thing that’s happened — maybe just in general being more cautious because there is a virus going around,” reflecting on the extra imperative this summer of keeping swimmers from getting into trouble.

Ed Costigan, a veteran lifeguard with decades of experience who trains all the rookies and is a Jones Beach Field 2 captain, noted that as usual, many of them swim at the highest competitive levels at Division 1 or 2 universities.

This summer, he said, the lifeguards are emphasizing ways of preventing close-encounter rescues more than ever, including pushing a flailing swimmer a buoy if possible.

Costigan said the state has equipped lifeguards with the safeguards they requested, including personal protective equipment, disinfecting wipes, sanitizers and other protections.

“We see a lot of people coming in from the city and Long Island and everyone helps out … with social distancing,” he said.

COVID-19 has reduced beach attendance — parking is limited to half the usual number of vehicles — but not necessarily rescues.

On a recent Friday, seven people were pulled from a rip current in just five minutes, forcing the lifeguards to close the beach for swimming, Costigan said.

While no rookie lifeguards are stationed at the ocean for at least their first year, they see plenty of action at the pools and at Zach’s Bay at Jones Beach.

Just north of the ocean at Jones Beach, Zach’s Bay often appeals to families with young children because the water looks much more placid. But it is also has tides as well as holes in the bottom that can catch toddlers by surprise, he said.

Sometimes, “Non-swimmers don’t even put up a fight. It’s almost like passive drowning.”

And at the ever-popular West Bathhouse pool, non-swimmers can seem utterly fearless.

“They just put all their faith in us," Costigan said. "You’ll see them jump off the diving board and sink to the bottom.”

After being rescued and asked why they dove in without knowing how to swim, a typical answer, he said, is: “Because you’re here.”