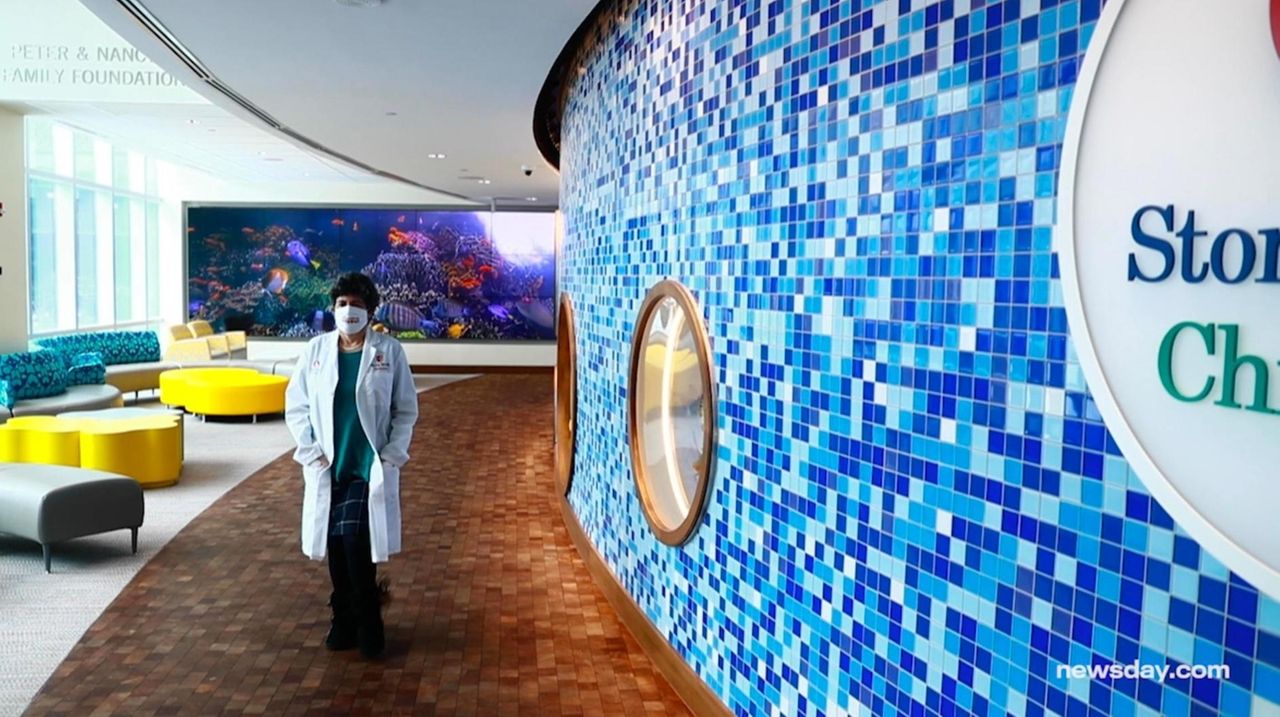 Dr. Sharon Nachman, chief of the division of pediatric diseases at Stony Brook Children's Hospital, says it's important for children to get vaccinated when they become eligible to help protect them and elderly family members. Credit: Newsday / Raychel Brightman

Most children probably won’t be able to receive COVID-19 vaccines until 2022, as research on them lags months behind studies on adults, experts say.

Pediatricians disagree on whether vaccine clinical trials involving children should have begun earlier. But they concur that vaccinations of kids would help protect both them and adults in their household, hasten the arrival of herd immunity — when the virus' ability to spread is greatly limited — and return kids to a more normal childhood.

"Vaccination is a really important tool in our tool kit for allowing kids to fully get back to all of those things that are really important to their health and development," said Dr. Lee Savio Beers, president of the American Academy of Pediatrics, citing the social isolation and academic disruptions the pandemic has caused.

Jennifer Bohr-Cuevas, of Huntington, said she is eager to see her 12-year-old son, Jesse Cuevas, obtain a vaccine.

"I have seen firsthand what COVID has done to people with underlying conditions," said Bohr-Cuevas, whose aunt and uncle died of COVID-19. "So, being the mother of a child with, one, epilepsy, and, secondly, a heart condition, and he’s also autistic, the thought of him contracting COVID terrifies me."

She said her research into the vaccines allayed initial concerns about them.

At the Huntington-based social services agency Family Service League, clients talk to social workers of their hope that vaccines will help their kids go back to a regular school and social life, said Christian Racine, the league’s senior director for clinics.

The U.S. Food and Drug Administration authorized adolescents as young as 16 to receive the Pfizer-BioNTech vaccine, because there was enough data from clinical trials on them. But Pfizer did not finish enrolling 12- to 15-year-olds in trials until last month. The company will begin studying children 5 to 11 "when we have data for the 12- to 15-year-old cohort," company spokeswoman Keanna Ghazvini said in an email.

That means kids 12 to 15 wouldn’t be able to start receiving the vaccine until the summer at the earliest, and that younger children likely wouldn’t be authorized to get it until early 2022, said Dr. Sharon Nachman, chief of pediatric infectious diseases at Stony Brook Medicine and one of six members of the state's clinical advisory task force, which reviews vaccines.

Only those 18 and older can currently take the vaccine from Moderna, manufacturer of the only other FDA-authorized vaccine. The company is still enrolling kids 12 to 17 in clinical trials, according to a federal clinical-trial website.

Vaccine-makers AstraZeneca and Johnson & Johnson are expected to begin clinical trials involving older children in the next few months.

Nachman, who in September co-authored a paper in the journal Clinical Infectious Diseases calling for the inclusion of children in clinical trials, said that, for months, there has been enough safety data for the two authorized vaccines on adults to go forward with studying children as young as 2.

Pfizer and Moderna are following the traditional path of first studying older kids and waiting to study younger ones, she said. But that approach must be balanced with the deaths and hospitalizations that COVID-19 has caused among children, the unknown long-term effects of the virus on kids who contract it, and children's ability to transmit the virus to vulnerable adults, she said.

"I think in the time of a pandemic such as this, with knowing the efficacy of the vaccine in adults, it should be all the age groups, 2 and over, studied at the same time," she said. "That would accelerate our ability to get an answer and vaccinate children."

Nachman said dosage for some noncoronavirus vaccines is the same for adults and children, while for others it may be different based on age. But, she said, "There is no vaccine that is efficacious in adults and not efficacious in children."

Dr. Leonard Krilov, chief of pediatrics at NYU Langone Hospital-Long Island in Mineola and an infectious disease specialist, agreed with Nachman on the likely timetable for vaccine rollout for kids. But he said that with relatively low COVID-19 death rates for children, it is sensible "to go slowly."

"I think it’s a safety-first issue," he said. "As you get younger, you might have to address dose and side effects differently."

Young children may have different side effects because their bodies are smaller and not as immunologically developed, Krilov said.

Twenty-three of the more than 36,000 New Yorkers who have died of the disease have been under 20, according to the New York State Health Department. In addition, at least two New York children have died of multisystem inflammatory syndrome, a disease linked to COVID-19.

Beers said "we do have concern things could have moved a bit faster" with the ground work needed to prepare for clinical trials in children. But, she said, drug companies should follow the traditional route of studying kids by age group.

"It really is essential we do follow the stepwise process for vaccine development in children," she said. "Children are a more vulnerable population."

"Older children are physiologically more similar to adults, and so as we establish efficacy and safety in adults, then we can start to be able to better understand how the vaccine will work in children," Beers said. "We don’t expect major differences, but it’s important to establish that safety and efficacy."

Dr. Anthony Fauci answers LIers' questions about COVID-19 vaccinesLong Islanders submitted more than 2,000 questions to Dr. Anthony Fauci. He couldn't answer all of them, but he did answer a number about coronavirus vaccines and what we should expect. Get answers to your questions about the COVID-19 outbreak Newsday is committed to answering your questions about the coronavirus outbreak, from the best ways to avoid exposure to who is eligible for testing, and more. Here you'll find links to all our guides. Check back often as we continue to update this page. Resources to help you during pandemicNewsday has compiled this list of telephone numbers, websites and other resources to help you navigate life during coronavirus. See the latest news on the coronavirus, vaccinesKeep up to date with the latest on the global coronavirus outbreak.