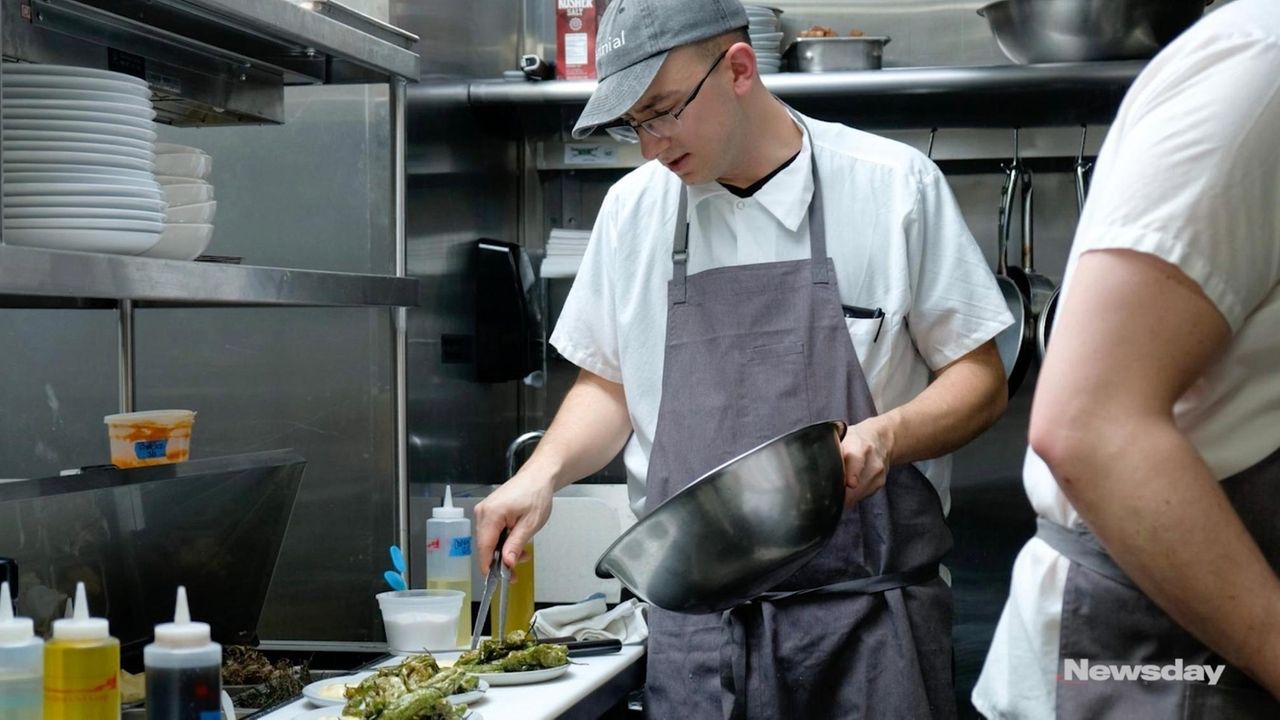 From fitness trainers to restaurant owners, Long Islanders across many industries have seen their once-steady stream of income come to a halt. Credit: Newsday / Jeff Basinger

From bartenders to personal trainers, Long Islanders across many industries have seen their once-steady stream of income come to a halt and their lives suddenly upended as a result of the COVID-19 pandemic.

As recently as a few weeks ago these Long Islanders had no concerns about their job security. But once the number of coronavirus cases began to grow, nonessential businesses were shuttered to slow the spread. That left these people out of work, spending their days navigating the unemployment website, looking for jobs and thinking about their future.

They’re not alone. More Americans filed unemployment claims last week than in any other week in history.

Here are a some of their stories.

Borenstein, 30, and Tinnirello, 26, work together as personal trainers at a Babylon fitness facility.

The newlyweds said their paychecks from the gym are completely reliant on training clients. They only get paid if they complete a training session, with the gym taking a cut of the training fee.

Finding work has never been an issue before. Together, they’ve built a client list of more than 50 that they said typically led to more than 100 personal training sessions a week.

“If anything,” Tinnirello said, “I’ve wondered if we were too busy.”

Clients became concerned about the coronavirus early this month. Then Gov. Andrew M. Cuomo ordered all gyms closed as of March 16, to help prevent the spread of the virus. They've been out of work since.

“Things got completely ripped out from under us,” Tinnirello said. “Our whole routines, our whole schedule is now blank. We went from having 100-plus appointments a week to nothing in a couple of seconds.”

They’ve saved enough money to cover them for a couple of months. But with rent, car payments and health care bills, they know they can’t stay idle for long. Tinnirello last week began offering group training sessions on the online video platform Zoom for $10 a session while they figure out their future.

They insist they’re staying positive. They say they’ve given themselves no choice.

“We definitely don’t have the chaotic mindset,” Borenstein said. “We’ve got the definitive, ‘Ok, here we are now. This is our reality. And how do we make this better?’ ”

As a union cleaner at NYCB Live’s Nassau Coliseum, Florentino, 46, has grown used to a haphazard schedule. She said her hours change week to week, based on how many events take place at the Uniondale arena.

For an Islanders game, she’d typically arrive around 9 p.m. The mother of three — ages 10, 17 and 25 — was responsible for cleaning the locker rooms and suites.

Some days, if an event ran late, the sun would be coming up as she was arriving at home.

“Sometimes I’d have the time to sleep for one or 1 1/2 hours because I need to get my kid up to get to the school,” said Florentino.

Everything changed on March 12. She was supposed to work that night after the first day of the 11-day Jurassic World Live tour was over. But shortly before it was to begin, the event was canceled. That same day, all remaining Islanders games were postponed.

The Coliseum suddenly has an empty calendar, and the state has banned gatherings for the foreseeable future. She doesn't know when she'll work again.

Her husband is still working as a transportation worker in New York City. But she doesn’t know what the future will bring. After years of renting, they bought their first home in 2017 around the same time she got the Coliseum job.

Cuomo recently issued an executive order that gives state residents “who can demonstrate financial hardship” because of the virus 90 days of extra time on mortgages. But Florentino is most concerned about finding steady income again.

Three months ago, Haapa found the job she said she spent her career in restaurants looking for: as manager and service director at a top-notch restaurant.

The job was at Perennial, a small mostly farm-to-table Garden City bistro in only its second year. Her boss, Mistretta, 33, is chef-owner.

Haapa said she had a sense a tsunami was headed for the industry on March 6 when she spoke with two doctors there. “They both said they shouldn’t be outside right now,” she said, and they explained how the virus could spread so quickly.

When Cuomo said on March 16 that restaurants could only do takeout and delivery, Mistretta said he had no choice but to close and lay off his dozen workers, including Haapa.

She said she understood, and felt bad for Mistretta.

“I don’t have the type of restaurant that can survive on takeout,” he said. “Having to put people out of work was an awful decision. And I'm out of work just like my employees are.”

Now, both are trying to plot their future, but they said it’s difficult to look too far ahead.

To that point, Haapa declined to give her exact age — she said only that she is over 50 — because she feared it would hurt her future employment opportunities.

“I’m almost too afraid to go down that road of looking ahead because I know the difficulty I was faced with to get this job,” she said. “It’s been difficult for me anyway to find a halfway decent job in this industry. What am I going to do after this?”

She said she is thankful that she is single, and that no one else is relying on her. She rents an apartment from friends and said she has her bills paid for three weeks.

“Talk to me in three weeks,” she said. "Right now we can't go out and buy toilet paper."

Mistretta, who is married, said he hopes he can open his restaurant again. He doesn’t know when or if that will be possible.

Arquer, 31, loves being busy. She started the month working as a full-time bartender at a chain restaurant, a coach of the Brentwood High School marching band and a part-time worker at a New Jersey-based accounting and consulting firm that specializes in restaurant finances.

But in the span of a few weeks she’s lost all three jobs.

“You think you have a little job security by having your hand in different bowls everywhere, but then this happens,” she said, “and it's a scary situation.”

She said her immediate response was a determination to not go on unemployment.

“I feel like I should leave unemployment to those who are not fit to work," she said. "I want to get out there and work. I’m healthy, I’m young.

“I want to try and provide for myself.”

She was out of work on March 16. She spent the next few days drawing up plans to find immediate work. And by March 21 she found a temporary gig at a big-box store. The hours are limited, but it's a paycheck. And a new start.

Her search didn't last long. By the end of her first week without any of her jobs, she landed a temporary gig at a big box retailer. So she spent the last two days applying to work for supermarkets or big-box stores.

She lives in her parents' home and pays their mortgage while they live upstate. Without the steady income from her three jobs, she's most worried about paying for health insurance. But she's not allowing herself to think too far down the road just yet.

She constantly reminds herself to think of others.

"Being kind is just as contagious as being sick," she said. "It's important to keep other people in mind when their whole lifestyle has changed."

Mahoney is a 22-year-old student at Farmingdale State who works as a waitress at a nearby restaurant.

For two years she has put in about 25 hours a week and used the income — mostly tips — to pay for her tuition. The job has been a blessing, she said, because she’s about to graduate in May without any student loans.

Two weeks ago, when the state shut down restaurants, the wait staff was let go. Now she's uncertain about her future.

“They didn't want to keep us in a limbo state so they called us in and said they were laying everyone off so we have the chance to apply for unemployment while we wait for everything to start back up,” she said. “In some ways I’m lucky. Some people have kids, mortgages.”

While her expenses are relatively minimal — she lives at home — she was looking forward to graduating and looking for a job in marketing. She had an internship at a physical therapy facility this semester, but that has effectively stopped, as well.

What's next, she said, is anyone's guess. She doesn't know who would hire a college graduate at this uncertain time.

“I'll need to look for another job, because I can't live off my savings,” she said. “So many businesses are closing down that no one is looking to hire.”

So for now she's decided to take a breath. She filed an unemployment claim and is focusing on her studies. She wants to see how the economy shakes out before making any fast moves.

"I honestly don't think I would feel comfortable starting a new job," she said, "while everything still seems very unstable for the workforce."

Data: See hospital beds available on LIA Newsday analysis of NYS Health Department data shows that Long Island had some 7,250 hospital beds before the coronavirus pandemic. Coronavirus myths: What's true and what's notYes, you can contract the virus in public places like mass transit, although it's unlikely, but no, the virus isn't connected to Corona beer. See the latest news on the coronavirus, vaccinesKeep up to date with the latest on the global coronavirus outbreak. Editorial: All-out war on viruses neededBetter planning and consistent research are required to beat coronavirus and other threats.