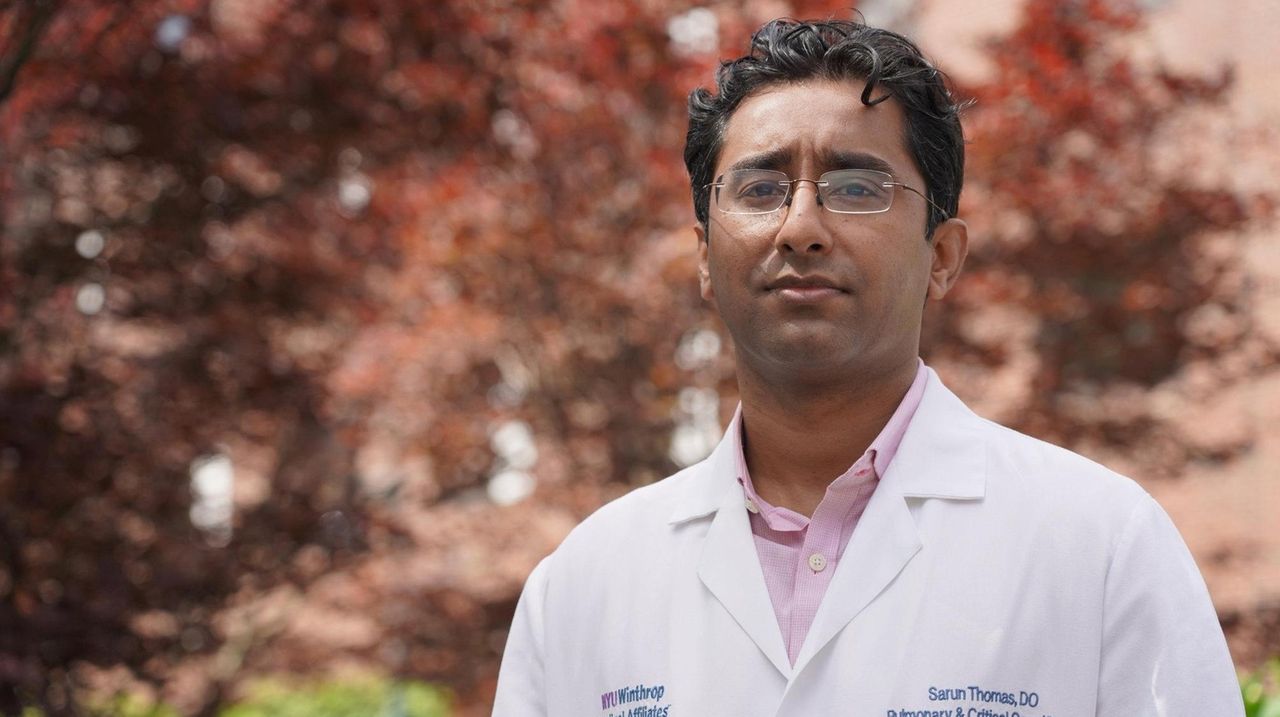 Dr. Sarun V. Thomas, director of the Intensive Care Unit at NYU Winthrop Hospital, talks about lessons he learned from his experiences as a doctor treating patients with COVID-19. Credit: Debbie Egan-Chin

The 50-year-old man was so sick from the COVID-19 virus that he needed a ventilator to breathe. He had been transferred to Stony Brook University Hospital from another hospital that had done all it could for him. The Stony Brook doctor decided to try a controversial treatment using high doses of a steroid.

Dr. Mohamed Mansour, director of the Medical Intensive Care Unit at Stony Brook Medicine, said that after a week of using the steroid on the man, aimed at reducing inflammation in his lungs, he was able to reduce the oxygen and pressure settings on the ventilator. Three weeks later, the man was off the machine and eventually was discharged, Mansour said.

Stony Brook has now made this a standard of care for critically ill COVID-19 patients with severe lung damage, and other Long Island medical centers also said they are using steroids in this way, he said.

The medical lessons learned about COVID-19 didn't come easy. The coronavirus has killed more than 4,000 Long Islanders, making it among the hardest-hit areas in the country. At its peak on April 14, Stony Brook University Hospital had 359 COVID-19 positive patients.

During the early, worst days, doctors found themselves treating hundreds of patients a day coming into emergency rooms, with many of them dying. They had no playbook filled with standards of care backed by peer-reviewed studies. Doctors built their treatment from the ground up, sometimes turning on a dime, playing an educated hunch, culling reports from China and Italy, and trashing treatments for new ones.

There is still no vaccine for COVID-19. Dr. Anthony Fauci, infectious disease chief at the National Institutes of Health, has said he's "cautiously optimistic" that some vaccine could be available at the end of the year.

Meanwhile, Long Island doctors said they improved their use of ventilators, learned the value of masks, found new medicinal therapies, and better addressed the virus' propensity to create blood clots. These lessons, doctors said, make them better able to save lives and have prepared them to handle any potential spike in cases come this fall.

"There have been about seven iterations in our treatment guidelines," said Dr. Mangala Narasimhan, regional director of critical care for Northwell Health, the state's largest health care system. "We are rewriting our current guidelines."

In those harried days, Mansour said the meetings of hospital leadership were rife with debate over adopting new protocols.

"There were disagreements about everything. A lot of hearsay, very little science," he said. "Essentially, a lot of chaos."

More recently, a British study that tested the steroid dexamethasone on 6,000 patients found it reduced deaths by a third in patients on a ventilator, and by a fifth in patients requiring only oxygen treatment. The drug showed no benefit for patients who did not need respiratory support.

In general, steroids are used to decrease inflammation in the body. Mansour used the steroid methylprednisolone, which he believes concentrates well in the lungs, on the 50-year-old man. He said he believes it did not, as some physicians feared, prolong the illness by weakening the immune system. He is helping to write a research paper on the work.

Northwell Health reported a fatality rate of 21% for COVID-19 patients admitted to its hospitals in March. The rate has decreased to about 10% due to a combination of earlier and improved treatment, hospital officials said.

Early on, seeing patients' lungs failing so quickly, doctors turned to ventilators. But the invasive nature of placing a tube down a person's throat, along with forced inflation of lungs made less-flexible from the disease, proved too much for many patients, Narasimhan said.

"We learned that ventilators can hurt patients as much as help," she said.

Doctors were aware of an alternative treatment — essentially giving high-pressure doses of oxygen through a mask — but they were wary of it. Doctors were concerned that high-flow oxygen would push more of the patient's virus into the air, endangering the medical staff, Narasimhan said.

As studies emerged on the safety of masks, that concern diminished, and Narasimhan said doctors now are successfully using high-flow oxygen before trying a ventilator.

Some hopeful ideas have been shot down as well. Hope flared when President Donald Trump championed the use of the antiviral drug hydroxychloroquine. But the National Institutes of Health said this month that it had stopped two clinical trials of hydroxychloroquine. One trial was stopped because the drug was unlikely to be effective and the other because not enough patients signed up to participate, the agency said.

The antiviral drug remdesivir, as well as the use of blood plasma, also have been shown to help some patients shorten the length of illness. But there are no treatments specifically developed to stop the disease in its tracks. Most of the lessons address supportive care of the disease, helping people get through it, said Dr. Adam Singer, Stony Brook Renaissance School of Medicine's vice chairman for research in the emergency medicine department.

Some lessons came from learning more about COVID-19, doctors said. Doctors learned early on that the virus attacks not only the lungs, but also the kidneys, liver and heart.

But COVID-19 patients were showing lung as well as kidney damage. In those cases, doctors are allowing patients more fluids to help the kidneys operate and recover. It's been a balancing act, Golbin said.

"The challenge is it can't be too little or too much water," he said. "It's patient-specific."

Blood clots proved a formidable problem with COVID-19, said Dr. Sarun Thomas, director of the medical ICU for NYU Winthrop. The body usually regulates the balance between clotting and bleeding after an injury. But infections also can create clotting.

For patients, severe inflammation was causing an alarming degree of clotting, he said. Blood clots can cause a stroke or get into the lungs, making breathing even more difficult, he said.

"If there are high levels, we start it before even having a clot," he said.

These lessons are being shared in-house in hospitals, and beyond. Medical leadership meets regularly to discuss treatments, and numerous Island hospitals are involved in clinical trials. Stony Brook University researchers have launched more than 180 COVID-19-related studies in order to battle the virus and examine circumstances where it has or will change society.

Hospitals also have learned lessons in how to adapt their buildings to accommodate a surge in pandemic patients. They've created pop-up emergency rooms, established command centers and converted some patient rooms into "negative pressure" rooms to prevent cross-contamination from one room to another.

So, if the virus comes back with a vengeance in the fall, doctors said they're better prepared.

"We have our plan of attack," Golbin said. "We are prepared if it comes. We can rip the cover off and turn on the engine."