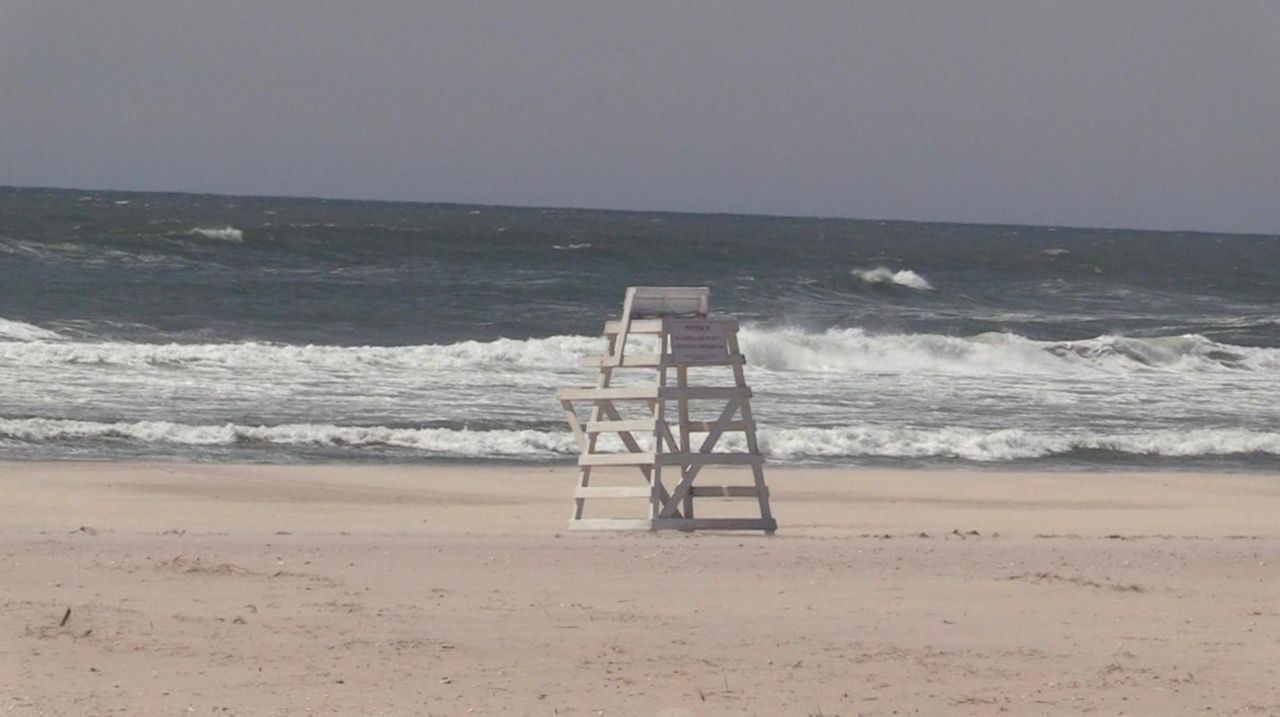 New York State and its lifeguards are tussling over anti-virus safeguards ahead of the opening of Long Island beaches. Nellie Brown, director of Workplace Health & Safety Programs at the Worker Institute / ILR School at Cornell University, says lifeguards are at risk when having to save someone. Credit: Nellie Brown; James Carbone

New York State and its lifeguards are tussling over anti-virus safeguards ahead of the opening of Long Island beaches Friday.

Like other first responders, lifeguards will put themselves at risk when rescuing distressed swimmers or boaters, public health experts say, as even those with the coronavirus who are asymptomatic can infect others.

COVID-19 cases in New York have been concentrated downstate, including on Long Island, and  some veteran lifeguards say New York has had to scramble — the beach reopenings were announced only last week. They also say the state has fallen short on adopting innovative strategies such as enforcing perimeters in the water and letting lifeguards use drones and scuba gear.

A union official for the lifeguards said safety discussions with the state parks department are continuing, adding he did not foresee any job action or protest.

“Our members want to go to work and protect the public. It’s a calling,” said Ryan Clark, president of the 1,100-strong New York State Lifeguard Corps. “The state is right on board” with the safety talks, he added.

So far, the state has agreed to supply the following protections, parks spokesman Dan Keefe said by email: “Each lifeguard will receive a fanny pack which will contain a mask, gloves, hand sanitizer, CPR mask, safety glasses and a surgical mask for beachgoers who are pulled from the water."

Keefe also said that each lifeguard shack will be equipped "with necessary supplies and materials such as disinfectant and hand sanitizer.”

“As part of their lifeguard training and recertification, all state park lifeguards are trained to practice 'universal precautions' related to infectious diseases,” he said.

Other localities across Long Island will enforce their own rules on their beaches.

Lifeguard patrols around the nation, from Miami to Los Angeles, are grappling with the same issues amid the pandemic: how to keep swimmers, and themselves, safe. Some have additional equipment, from fleets of personal watercraft with sleds, to motorboats, to patrol trucks.

Some veteran Long Island lifeguards are pressing for those kinds of upgrades, along with improved communications and lightning alert systems. But motorized watercraft and vehicles have been avoided in New York in the past due to fears that dense crowds might be endangered by them. Some beaches do have smaller, more maneuverable, open-cab vehicles.

“Jones Beach has all the necessary equipment to meet the needs of its unique water safety operation, including State Park Police drones, personal watercraft, ATVs and radios to assist in the water safety operation,” Keefe said. “State Parks consults regularly with the Jones Beach Lifeguard Corps to review and determine equipment needs, and will make any updates to enhance the safety of the beach.”

What beachgoers can expect

When state beaches open Friday, parking lots will be limited to half their capacity, pools and playgrounds will remain closed, and parkgoers will be asked to keep at least six feet apart or wear masks if that's not possible.

Lifeguards will be asked to wear masks while on land, frequently wash their hands,and cleanse equipment — and showers will be provided, the state parks department says.

Expect to see lifeguards no longer sitting next to each other; that would violate social distancing guidelines. The union has requested more chairs.

Lifeguard teams on Long Island and around the country are pondering how to safely rescue swimmers in trouble. Clark, a Jones Beach veteran, said he likely will switch from grabbing someone by the hand to pushing a buoy or torpedo to them and hauling them in that way.

Upon reaching the beach, Clark said, the lifeguard will have to go shower off as other lifeguards wearing personal protective equipment take over and tend the patient. Bag valve masks probably will be used instead of the traditional and more hazardous mouth-to-mouth resuscitation.

Nellie Brown, director of Workplace Health & Safety Programs at the Worker Institute / ILR School at Cornell University, sounded a note of caution regarding PPE. “As always, the equipment needs to be provided, fitting the wearer properly, and properly donned and doffed and decontaminated,” she said.

And, the effectiveness of some N95 masks drops to just 20 minutes to half an hour in moist, extremely high heat, studies show.

Critics of the state’s developing program fault it for not assigning workers to frequently disinfect lifeguard equipment — including stands where people tend to gather before beaches are opened. And the state has not adopted new strategies, such as enforcing perimeters with personal watercraft, motorized boats or lifeguards in scuba gear.

Brown called those and some of the other policies lifeguards proposed “excellent."

Though scuba gear would be highly protective of lifeguards themselves, it would be tough to use on a beach without backup teams of lifeguards, one expert noted.

“While scuba full-face mask with hood and oxygen tanks should prevent a lifeguard from getting infected when taking the drowning victim out of the water, time spent putting scuba equipment on would impede the timeliness of a highly time-sensitive rescue response, and having scuba equipment on will most likely impede the effectiveness of the CPR delivered by the lifeguard,” said Dr. Alexander V. Sergeev, an associate professor with the Department of Social and Public Health at Ohio University.