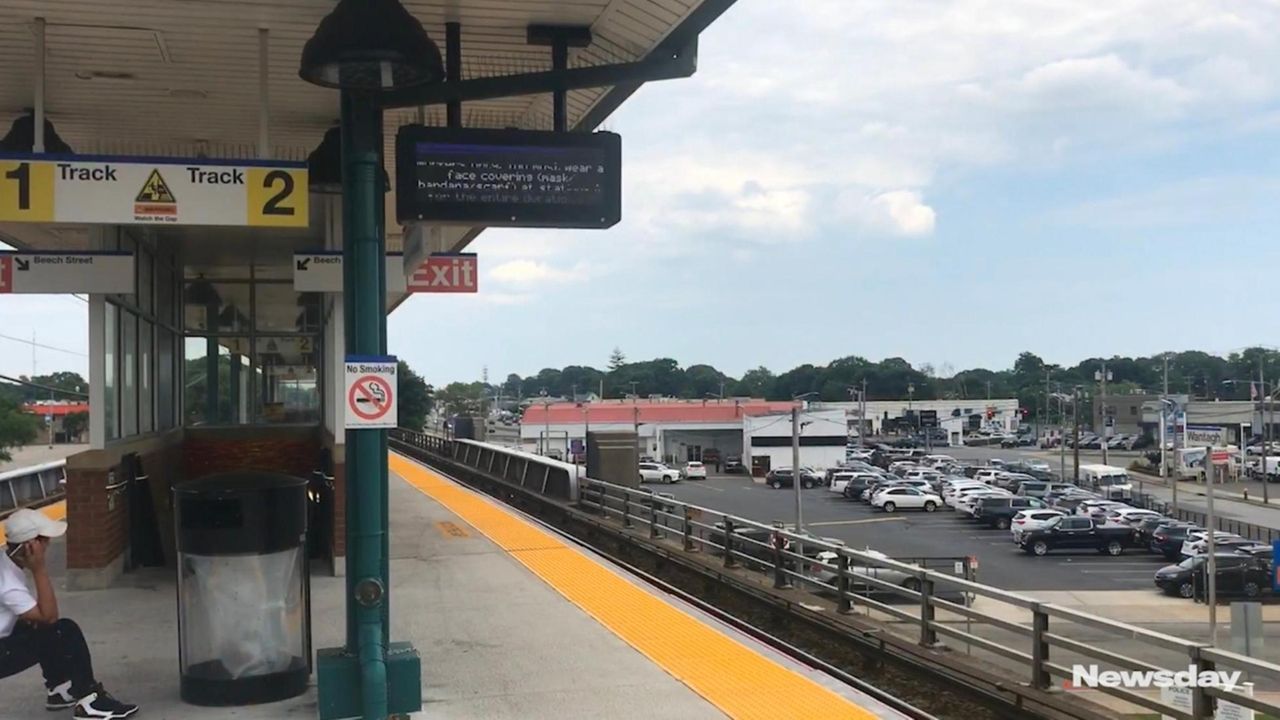 Some riders are concerned about returning to the LIRR after the coronavirus crisis, and there are questions whether the mask-wearing policy is being fully enforced.  Credit: Newsday / Alfonso Castillo

The inconsistent use of face masks by Long Island Rail Road passengers is raising safety concerns among some commuters and demands that the LIRR crack down on the requirement that riders wear face coverings to prevent the spread of COVID-19.

Although officials with the Metropolitan Transportation Authority — the LIRR’s parent organization — have said as many as 95% of customers are wearing masks, some riders argue the compliance rate is considerably lower, and note that some of the railroad’s own conductors are not covering up.

“You’re going to get those people who aren’t going to do it, unless they’re nudged or someone speaks to them,” said Gerard Bringmann, the new chairman of the LIRR Commuter Council, the railroad’s state-regulated rider advocacy group. Bringmann said he has noticed that some who do wear masks pull them down when nobody is looking.

“It’s just human nature,” Bringmann said. “It’s unfortunate, but that’s just the way it is. And there’s really no way you can 100% police this.”

Protective masks have been a central focus of LIRR leadership as it works to attract customers back to the rail system, whose ridership has been decimated by the pandemic. At the height of the outbreak in April and May, the LIRR was carrying just 3% of its usual riders. That number since has climbed to 16% with the gradual reopening of New York, according to the railroad’s most recent figures.

Keeping some commuters from returning to the LIRR have been concerns about the potential spread of the virus within the confines of 85-by-10½-foot train cars. Both the Centers for Disease Control and Prevention and the American Public Transportation Association have issued guidelines encouraging the use of cloth face coverings on trains, and an executive ordered signed by Gov. Andrew M. Cuomo in April made the use of masks mandatory throughout the MTA system.

LIRR president Phillip Eng said in a statement that he appreciates the efforts of customers and employees who have been wearing face coverings, as "we need everyone's continued support in this effort."

"It's up to each and every one of us and our actions that will determine how quickly we beat this virus," Eng said. "So I ask public transportation customers, and those out in the public generally, to do the right thing, and wear a face covering. You never know whose life it’s going to save.”

But some riders said the LIRR’s enforcement of its mask policy has been lax at best. After someone sat across from her without a mask on her morning train, Merrick commuter Judie Ulberg said she moved to another seat, and notified the train crew.

“I said to the conductor, ‘You make the announcement, and the signs are all over. Why aren’t you enforcing this as a protection to all of us?’ … And he said there’s nothing he can do,” said Ulberg, adding that she believed the railroad had the same responsibility as local business owners to make sure its customers wear masks.

“Why is it that a hair place or a nail place will be cited and their license will be taken away, but the big guys, like the Long Island Rail Road, nothing happens to them?” said Ulberg, a sales director for a bridal company.

Ulberg said the LIRR should get MTA Police to enforce mask requirements on trains, or at least allow conductors to supply face coverings to passengers without protective masks.

Anthony Simon, general chairman of the International Association of Sheet Metal, Air, Rail and Transportation Workers — the union representing LIRR conductors — said they tell passengers about the railroad’s mask requirement and hand out “informational tear-off messages” explaining it. But they also try to avoid “the inevitable confrontations that arise on opinion and policy.”

“The agency has been clear that is a function of law enforcement, and frankly, our crews have enough challenges with collecting fares and safe train operations,” Simon said.

Conductors and other railroad staff at stations are reminding customers to wear masks, said LIRR spokeswoman Meredith Daniels, and anyone not wearing a mask could be asked to leave the system.

But the railroad previously has acknowledged that it has taken a hands-off approach to making sure customers adhere to the rule. Responding to one rider who complained about the railroad’s enforcement on Twitter, the LIRR said it is “relying on our customers to comply with the executive order.”

In a Newsday webinar in May, MTA chairman Patrick Foye said the railroad would primarily count on “firm, but gentle, peer pressure” among riders to enforce the policy. In “a limited number of cases,” LIRR personnel could intervene, said Foye, who has made it clear riders will not be arrested, nor removed from trains, for failing to comply.

“We don’t want to make this a police matter as a first order of course,” Foye said. “Wearing a mask is a sign of respect and care for others … We believe that our customers are complying at a high level.”

MTA Board member Kevin Law, who represents Suffolk County, said he plans to propose at the board's next monthly meeting that the railroad adopt a "no mask, no ride" policy."

Reflecting the idealogical  divide on the issue of masks across the country, some LIRR riders have balked at the mask requirement. John Whitfield, of Uniondale, believes the protection provided by face masks is “minimal at best.”

“I am not against wearing a mask, but am against being mandated to do so,” said Whitfield, who wore a mask while taking a train from Hempstead to Manhattan recently.

Whitfield took his mask off during the return trip when he noticed the train’s conductor was not wearing one. “If they can use discretion, then why can’t I use discretion?” he said.

Simon said train crew members are generally wearing masks, and the “very few who are not” may have underlying health issues.

LIRR commuters wary of safe distancing at Penn StationA possible COVID-19 return and a projected 60% rider increase by the end of 2020 have some commuters wary of staying safe at the transportation hub. Answers to how COVID-19 is spreadNewsday interviewed two Long Island doctors about how COVID-19 spreads and the best defense to the virus that caused a pandemic. See how the coronavirus is changing life on LI, in NYCSee the latest pictures from around the region during the coronavirus outbreak for the month of June 2020.