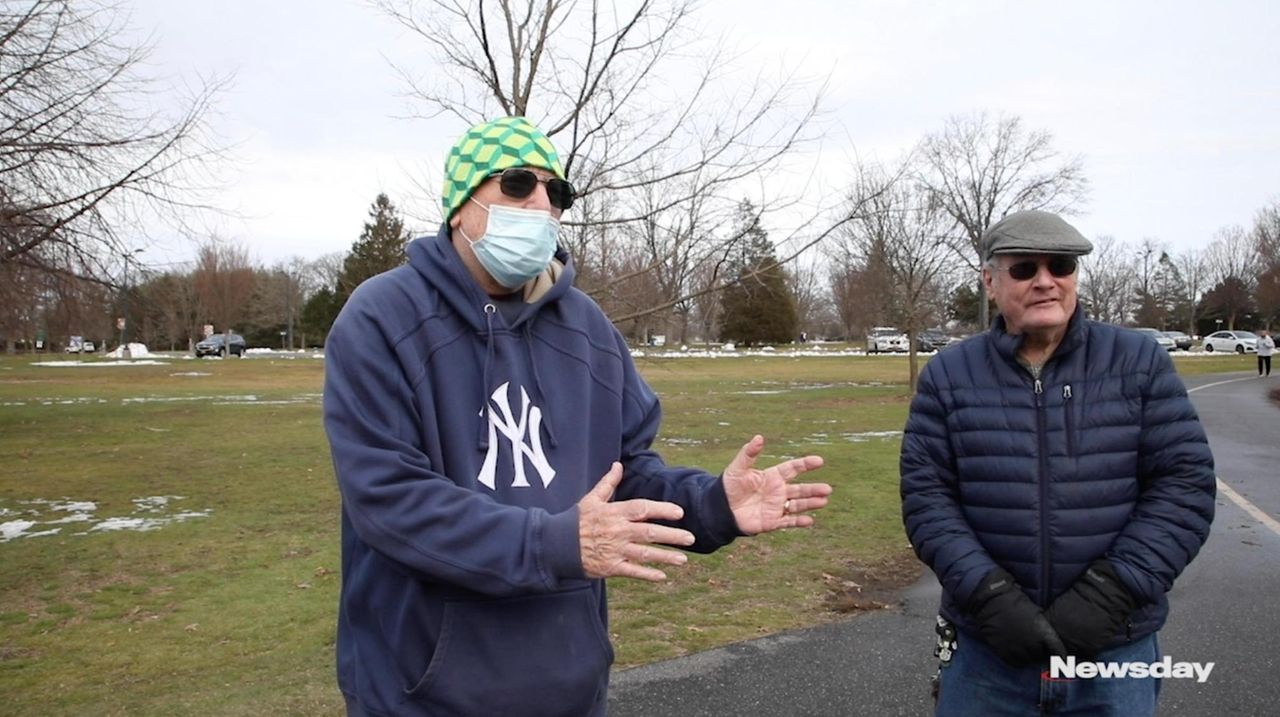 Long Islanders at Eisenhower Park on Thursday talked about whether or not they would get the COVID-19 vaccine. Credit: Barry Sloan

Seven out of 10 Americans plan on getting a vaccine for COVID-19, according to a new national poll released by Long Island University’s Steven S. Hornstein Center for Policy, Polling and Analysis.

The poll also showed more people who identify as Democrats — 59% — are concerned that they or someone in their family could become seriously ill from the coronavirus, compared with 37% of Republicans. The remainder — 42% — identified themselves as Independents or other.

Dr. Andy Person, chief of strategy and director of the Hornstein Center, said it was interesting to see how attitudes toward some COVID-19 issues had changed since their last poll was conducted in October — such as the number of respondents who said they would get vaccinated today if the vaccines were available.

"That number jumped from 38.2% to 71%, indicating a considerable change during the past two months in the way Americans are thinking about the vaccine," Person wrote in an email to Newsday. "It suggests that more Americans are optimistic and hopeful that there is a light at the end of the tunnel within reach in 2021."

The growing willingness to get vaccinated may in part reflect how far more people today are dying of COVID-19 or being hospitalized than a few months ago, said Dr. Mark Jarrett, chief quality officer for New Hyde Park-based Northwell Health.

"People are starting to get scared again," he said. "People are beginning to realize it is as serious as it was in the spring and they need to protect themselves as well as others."

Opinions about the vaccines, one from Pfizer-BioNTech and the other from Moderna, varied during interviews Thursday of people who were not part of the poll. Both vaccines require two shots.

Joe Gennaro, 73, of Garden City, said that a few months ago, he had planned to wait before getting a vaccination, because COVID-19 case numbers were relatively low.

"With the spikes, and probably continued spikes for the next several months, I’d like to get it done with," he said.

Gennaro said he is "a little concerned" because a few people have had severe allergic reactions to one of the vaccines — something that medical experts said can happen with a number of medications. Gennaro had an allergic reaction to penicillin as a child.

"Despite that, I’ll talk to my doctor, and I think I’m still going to move forward," he said.

Barry Fox, 76, of East Meadow, said he and others were concerned in the spring and summer about reports of a rush to release a vaccine.

"Most people were concerned about whether there was politics getting involved in vaccination results and testing," he said. "Now that the testing is over and it’s been cleared by scientists at the FDA [U.S. Food and Drug Administration], we feel it is safe enough to take."

Gina Burnett, of Elmont, said her multiple allergies make her wary. But, besides that, she also wants to see how people react to the vaccines over time and may not get a vaccine for another year.

In addition, as an African American woman, she wants to see how other African Americans react to the virus, she said. Research shows that the effect of vaccines and other medications can differ based on race or ethnicity.

The survey also asked respondents if and when they would resume certain activities, such as attending family gatherings, sports and entertainment events and traveling by air, once they are vaccinated.

"It was also interesting to see exactly how differing political views affect Americans’ planned behaviors after taking the vaccine," Person wrote. "This survey question … showed us that their beliefs are more of a driving factor than their age, gender, household income, or region."

According to the poll, 64% of Republicans would attend family gatherings in 2021 after being vaccinated, compared with 42% of Democrats and 41% of Independents/others.

When it comes to concerts, baseball games and other entertainment and sporting events, 60% of Republicans said they would attend after being vaccinated, but just 38% of Democrats and 36% of Independents/others said they would.

People who participated in the poll also were asked if they had confidence that wearing masks reduces the spread of the coronavirus. While 87% of Democrats and 70% of Independents/other responded yes, only 62% of Republicans did.

"They’re following their leader and he’s saying it’s nothing," Lambe said, referring to President Donald Trump. "And they just believe it."

What the poll said …

If you are vaccinated, would you take part in the following activities in 2021:

49% of Democrats and 49% of Independents/other answered yes.

42% of Democrats and 41% of Independents/other said yes

38% of Democrats and 36% of Independents/other said yes