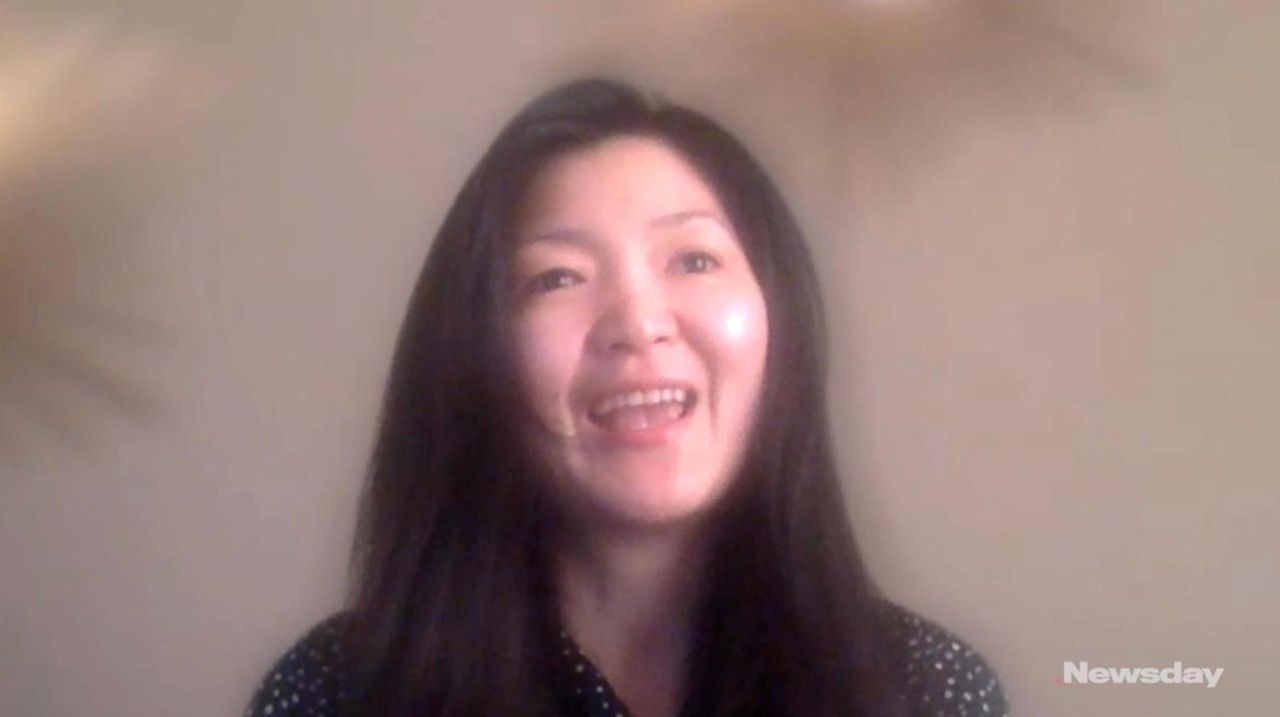 On March 24, Christine Liu, who is a board member of the Chinese American Association of North Hempstead, responded to President Donald Trump calling COVID-19 the "Chinese virus." She said that the coronavirus transcends all races and does not discriminate. Credit: Newsday Staff

Dr. Xinyu Zhao noticed that his son appeared upset after coming home one early March evening after school, as new coronavirus cases were just starting to spike in New York.

Later that evening, Zhao learned from his son that, in front of the whole class and a teacher, a fellow fifth-grader had told the boy to “go back to your country and tell your people to stop eating bats and rats.”

Only four years ago Zhao, a gastroenterologist who works in Flushing, moved his family to Long Island, in part for his children to study in the Manhasset School District. The father of two said the incident greatly disturbed his son and sent home crying another Asian American child who witnessed the scene. After the parents reported it to school officials, the student who made the statement apologized.

But in the following days, before the school closed, Zhao felt somewhat uneasy when dropping his son off in the morning.

“I didn’t know if he’s going to have another incident at school, if somebody else would say something to him,” said Zhao, 51. “I never felt concerned to send my kids to school. But I feel very concerned now.”

As the coronavirus continues to spread rapidly, members of the Asian American community have grown increasingly anxious over what they feel is a backlash against them because the pandemic originated in China.

Wai-Lin Ng, who was born in Hong Kong and emigrated to the United States when she was a child, had never felt the sting of discrimination — until recently in a Rocky Point supermarket.

“This was during the time when there was a lot of panic-buying at the stores, with shelves emptying out,” said Ng, who has worked at the Brookhaven National Laboratory for three decades. “There was a woman passing by, and I saw her staring at me, and she basically pulled up her scarf over her nose and mouth.”

Ng, 56, of Sound Beach, at first thought it was just her imagination, then came to realize the meaning of the woman's actions. She realized she had never experienced anything like that before, having lived on Long Island for most of her adult life.

“It’s not overt,” she said. But, she added, “we don’t want to get beyond that. … I think any ethnic group could potentially feel that they’re targeted. But if it escalates, it could become a problem.”

Some in the Asian American community and experts have pointed to anecdotal accounts and news reports of a rising number of verbal and physical attacks nationwide.

Nassau and Suffolk police said this week that they have not received any reports of verbal or physical attacks targeting Asians on Long Island. But the NYPD this week said that the department has investigated 10 cases where Asians were victimized in incidents related to the outbreak, making six arrests so far.

Earlier this month, a 44-year-old man was charged with aggravated harassment as a hate crime after he allegedly yelled profanities and hit a man over the head at a bus stop in Queens. The NYPD Hate Crimes Task Force last month also retweeted a video showing an Asian woman being attacked in a Manhattan subway station, asking the victim to report the incident so that an investigation could ensue.

In the past few weeks, Christine Liu, a board member of the Chinese American Association of North Hempstead and the Herricks Chinese Association, said she has heard of more than a dozen reports of harassment and discrimination against Asians in Nassau County.

She knew of no physical attacks against Asians on Long Island. The cases she heard of ranged from minor incidents including Asian children noticing other students moving away from them on a school bus after they coughed, to serious ones such as a man yelling at an Asian man when he took a walk with his wife and daughters in New Hyde Park.

“A lot of Asians as well as other minorities are very fearful,” said Liu, 40, of New Hyde Park. “It only takes somebody who’s mentally unstable to blame somebody in the Asian community and do something about it.”

Asian parents are also struggling to help their children cope with the newfound reality in the era of a deepening crisis.

David Chiang’s grade-school-age children told him that they’ve heard others say “don’t hang out with the Asians if you don’t want coronavirus.”

Chiang, 50, of Manhasset is concerned that the growing pandemic has exacerbated the long-standing perception of Asian Americans as outsiders.

“They are more American in language and culture,” Chiang said of his three children. “Their ethnicity, which should be a source of pride, instead causes social friction and makes them feel like outsiders.”

New York Attorney General Letitia James has established a hotline for the reporting of bias incidents and crimes in the state amid the pandemic. It can be reached at 800-771-7755 or via email at civil.rights@ag.ny.gov.

President Donald Trump, who has repeatedly called COVID-19 a “Chinese virus," has not helped matters, Asian Americans and advocates said.

Trump this week said he might stop using the phrase, also posting on Twitter a call to “protect our Asian-American community" and reaffirming that sentiment at the daily White House Coronavirus Task Force news briefing. But critics said that wasn’t enough.

“Unfortunately, his response is late, and a lot of damage has been done,” said Elizabeth OuYang, a civil rights attorney who teaches at New York University and Columbia University. “It’s better late than never, but it wouldn’t have to be said at all if the president himself had not fueled xenophobia in the way he referred to the virus.”

OuYang noted that the World Health Organization already advised not to attach locations or ethnicities to a disease as it could fuel stigmatization.

“History is repeating itself,” OuYang said. “Whenever there’s a war or there’s an economic [downturn] in the United States, oftentimes it’s the minorities and immigrants who are scapegoated.”

In recent weeks, the public hysteria as a result of the outbreak has reminded some Long Islanders of past periods of American history.

Jasleen Sabharwal, 60, of Oyster Bay still remembers the scene of a group of schoolchildren greeting her on Sept. 11, 2001, by yelling “you ... [expletive] people did it again? Go back to your country” as she walked from Manhattan to Queens.

Sabharwal, who emigrated from India in 1982, said the children yelled at her when she still had the white powder and fine glass on her face from the remains of the collapsed World Trade Center that day. Working at the time as an employee at Fiduciary Trust Company International, she lost nearly 100 colleagues after the south tower came down.

“Today, it’s the Chinese. Tomorrow, it’s the Indian,” said Sabharwal, who survived the attacks because she had not yet reached her office on the 96th floor. “It needs to stop now.”

Going back even further in history, Glen Cove resident Bob Machida, 75, grew up learning about internment camps from his family members.

Before Machida was born, his aunt and uncle on the West Coast were sent to an internment camp in Utah, while his mother and father on the East Coast were tracked by an FBI agent.

“In a climate that’s divisive like this, you could run into situations where some extremists may take advantage of a situation and say things they shouldn’t,” Machida said. “We’re one country, one multiracial country. And we’re all in this together.”