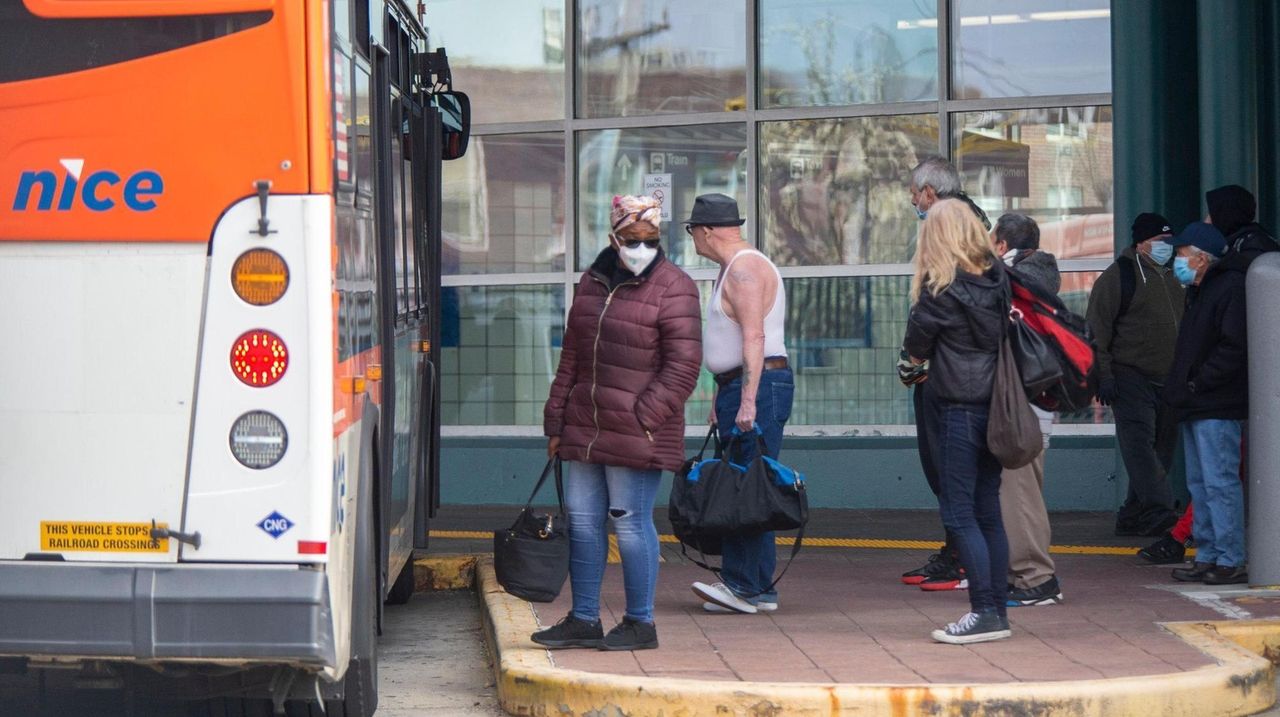 As ridership plummets on the LIRR and other public transportation lines, Nassau and Suffolk counties are still seeing a fair amount of passengers on their bus systems. Nick Sifuentes, executive director of the Tri-State Transportation Campaign, says we need more buses so riders can practice social distancing, to keep everyone safe. Credit: Newsday Staff

Long Island’s two county transit systems are still transporting thousands of riders each day, including many low-income, essential workers who struggle to practice social distancing inside the confines of a 40-foot-long bus, officials said.

While ridership on the Long Island Rail Road has plummeted by 97% because of the coronavirus outbreak, local bus providers have held on to a far greater portion of their riders, statistics show. The Nassau Inter-County Express, or NICE, reports that about a third of its 80,000 weekday customers are still riding buses. Suffolk County Transit has lost about half of its 15,000 weekday riders, officials said.

Nick Sifuentes, executive director for the Tri-State Transportation Campaign — a Manhattan-based transit advocacy group — said the disparity in ridership between the LIRR and local bus systems illustrates how most people still riding buses “have no other choice.”

“They’re grocery store workers. They’re home health care aides. They’re the kind of people who need to be on the bus, and their work requires them to physically be somewhere,” Sifuentes said. “These are the folks who are the most exposed on the front lines of the crisis.”

According to demographic statistics published by NICE last year, nearly three-quarters of its riders earn a household income of less than $50,000. About a third earn less than $15,000.

Among those still boarding a county bus each day to get to work is Christopher Barron, 30, of Bellmore — a substitute teacher currently assigned to an education program in Brooklyn that is still operating during the pandemic.

Barron said ridership on the typically crowded N54 and N55 routes he uses “is about half of what it normally is.” But it’s still not spacious enough for passengers to keep 6 feet apart, he said.

“I would say that everybody gets their own seat, so there aren’t people sitting next to each other or over each other,” Barron said. “But if you have your own seat, and you have someone in front of you, you’re not that far apart.”

“Instead of coming every ten minutes, now it’s going to come every half an hour or hour, depending on the line,” said bus rider and transit advocate Daniel Solow, of Valley Stream. “So those people who initially missed the bus now have to cram onto another bus.”

Khzouz said “at the very, very most” the county’s busiest routes, including the N4 and N6, are carrying up to 30 passengers at a time during peak periods. He said NICE is closely monitoring ridership levels, and deploying extra buses as needed when it receives reports of crowding.

Long Island’s remaining bus passengers also have less space than usual to occupy, as both Nassau and Suffolk bus systems are sectioning off the first several rows of seats to protect bus drivers. Khzouz said eight NICE drivers have tested positive for the virus. Suffolk Public Works Commissioner Joe Brown said “a couple” of its bus drivers have also been infected.

Both bus systems are taking other measures to protect drivers and passengers, including more frequent disinfecting of its fleet — twice a day in Nassau and every other day in Suffolk. At NICE’s busiest hub, the Rosa Parks Transit Center in Hempstead — through which 5,000 to 7,000 riders still travel each weekday — the indoor facility has been closed off, except for its restrooms, and queues at bus bays have been marked off to help keep riders 6 feet apart.

Both systems have also instituted rear-door boarding, which keeps riders farther away from drivers, but also hampers fare collection.

To minimize the impact on revenue, Suffolk is encouraging riders to use its “FastFare” mobile app, which allows them to prepay for their trips. Nassau last month opted to waive fares altogether.

“We just made the decision to be the most equitable possible and remove all the barriers and to go fare free,” Khzouz said. “Yes, it does have a major effect on our operating budget as we go forward … but, currently, right now, safety is the most important thing.”