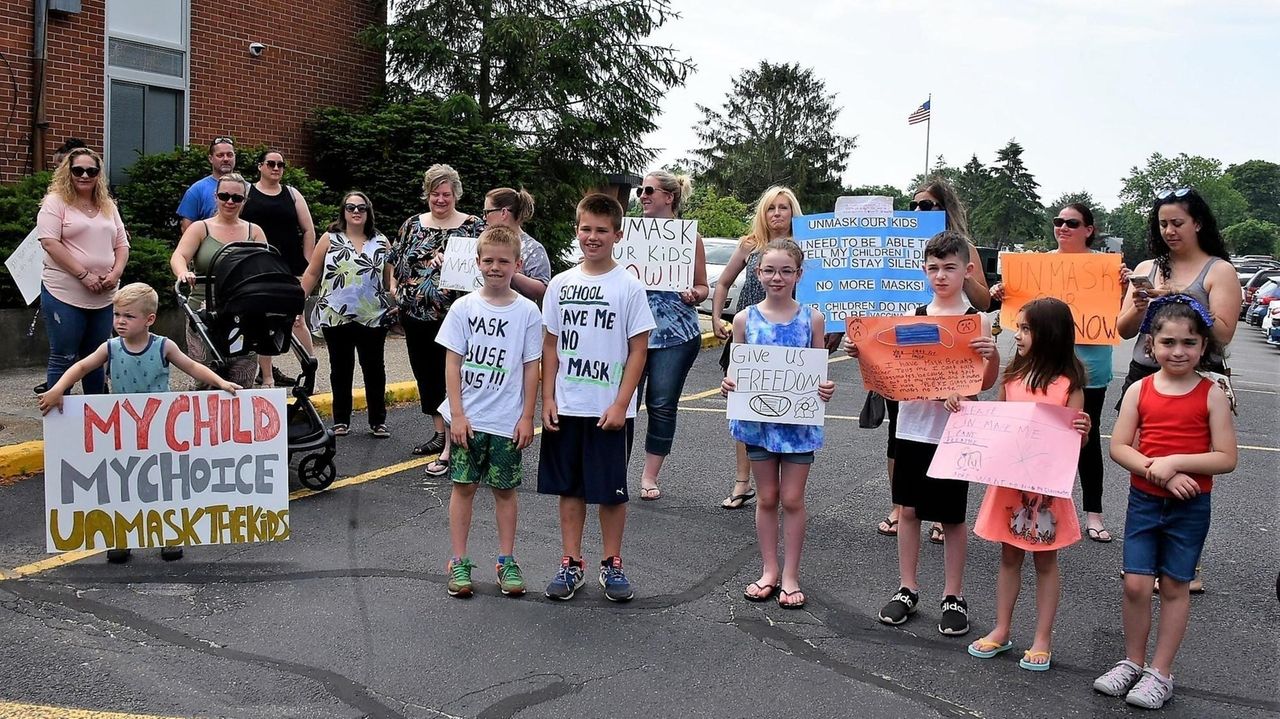 Gov. Andrew M. Cuomo on Monday said schools can lift the mask mandate when students are outdoors, but masks must still be worn inside. The announcement followed weekend confusion over whether masks at school were going to be made optional. Here is Newsday's Cecilia Dowd. Credit: Howard Schnapp; On Scene Photography; Facebook/ Governor Andrew Cuomo; YouTube / Sachem Schools

This story was reported by Robert Brodsky, Lisa L. Colangelo, John Hildebrand, Bart Jones, David Reich-Hale and John Valenti. It was written by Jones and Valenti.

New York students will not be required to wear masks outdoors on school grounds, but they will still have to wear them indoors, Gov. Andrew M. Cuomo said Monday.

The announcement for K-12 schools followed a weekend of confusion among parents, students and school districts after Cuomo's administration said Friday it would lift the indoor mask requirement on Monday, pending review by the U.S. Centers for Disease Control and Prevention.

"They make a good case with the inside and the potential hazards on the inside, and there’s only a couple of weeks left" of school, Cuomo said. "So we don’t want to make any mistakes."

His announcement landed as at least three school districts on Long Island were moving to eliminate mask requirements starting Monday.

The three districts said by Monday evening that they would reverse themselves, returning to the indoor mask mandate on Tuesday, while complaining of the whiplash effect of sudden directives from the state, with one school administrator saying districts felt like a "yo-yo."

"This directive is not subject to local school control and is a blanket requirement throughout the state. The failure to comply with such directives could expose the District with sanctions and liability," said a message posted on the Sachem school district's website. " … As such, beginning tomorrow, Tuesday, June 8, our students, visitors and staff will once again have to wear masks when in school."

New York students in K-12 grades will not be required to wear masks outdoors while on school grounds, but they will be expected to wear them indoors.

Virus levels tracked low in New York, with the statewide seven-day average of COVID-19 positivity at 0.51% on Sunday.

In another district, Middle Country, a protest of parents broke out in front of the administrative offices in Centereach on Monday after Cuomo's announcement at a livestreamed news conference.

"It’s our right to breath freely. It’s a constitutional right," said protester Colleen Ciganek, of Selden. "Knowing this is no longer a threat in the same way it was a year ago, at this point it should no longer be mandatory and it should be optional."

State Health Commissioner Howard Zucker had disclosed the possible dropping of the mask mandate indoors in a letter Friday that was included in a news release put out by Cuomo's office. The letter said, in part, that mask use would be "strongly encouraged but not required" for students, teachers and others in school facilities and youth camps.

The Patchogue-Medford, Sachem and Massapequa school districts announced over the weekend that students and staff would have the option to not wear masks on Monday, despite an announcement Sunday by state officials that mask requirements remained in place. Patchogue-Medford and Sachem had scrambled to reverse those decisions on Monday, and Massapequa had not responded to requests for comment.

Donna Jones, superintendent of Patchogue-Medford, on Monday afternoon said the district will enforce the mask rule again Tuesday to comply with the new state guidance.

"I am not one to violate the law. We in the district don’t do that," Jones said. "Once we have gotten this update, we will advise the community that we will resume mask wearing during the school day with regular mask breaks as necessary at the discretion of the teacher."

But Jones called the seesawing from Zucker's letter on Friday to Cuomo’s announcement on Monday "extremely frustrating. We are like yo-yos between agencies."

"Today’s announcement from the State regarding masks in schools has added another layer of confusion for parents and school officials rather than clarifying the situation," Curran said in a statement. "It’s well past time for this decision to be put in the hands of parents and educators."

Another parent, Heather Reado, of Lindenhurst, said she was disappointed the indoor mandate was not lifted. Her son receives speech services, occupational therapy and physical therapy in kindergarten, she said.

"It’s ridiculous that he has to wear a mask during speech services along with his therapist," Reado said. "He needs to see her mouth moving so he can mimic the movements, and she also needs to see his so she can help him with his speech."

Some Long Island school leaders hoped that the governor’s latest comments, coupled with directives from the CDC, would bring clarity.

"There’s a large outcry. We’re seeing protests around the Island. So we needed to see what the CDC’s direction was," said Ron Masera, the Center Moriches schools chief and president of the Suffolk County School Superintendents Association.

"It’s time to call a halt to these Friday afternoon edicts from the governor that ask schools to turn on a dime at a moment’s notice," said Lorraine Deller, executive director of the Nassau-Suffolk School Boards Association. "There are political undertones."

Cuomo said the CDC is "not going to change their guidance for several weeks" on schools' mask requirements, but New York can take a step on its own since infection levels have fallen with rising vaccinations.

"There is no mandate for masks outside. We’ll leave that up to the local school districts," Cuomo said.

School district officials, teacher unions and parents were surprised at what appeared to be an anticipated reversal of the indoor-mask mandate, after Zucker's letter.

However, Cuomo indicated that all along a decision was going to be announced Monday and only after consultation with the CDC.

He denied there were misunderstandings about the issue.

"We never said on Monday anything goes into effect," he said. "I said on Monday I will tell you after we talk to the CDC. And we talked to the CDC and they agreed with our decision to lift the mask mandate outside."

Zucker's letter had stated: "We plan to make this guidance effective on Monday June 7."

The school mask requirement has proved contentious as more parents and school officials have sought flexibility on the mandate, with many rallying on Long Island to say their children should not be required to cover their mouths and noses through the warm weeks at the end of the school year.

The pushback also has come as more people of all ages have accessed vaccinations, though the youngest New Yorkers lag behind in inoculation rates — with the state reporting 47.3% of the overall population being fully vaccinated.

According to the state's vaccine tracker, 25.4% of 12- to 15-year-olds in New York have received as of Monday at least one dose of the Pfizer-BioNTech COVID-19 vaccine, which is the only vaccine approved for use in people in that age group. Of those, 6.2% had completed their vaccinations.

The state site showed that 23% of Long Island's population of 12- to 15-year-olds have been vaccinated once, with 6.5% completing the vaccination series as of Monday.

Some also have argued that the same children who had to mask up in school were not equally required to do so in camps — a contradiction that Cuomo acknowledged on Monday.

Even before Monday's announcements, some districts had adopted less-restrictive policies.

The Patchogue-Medford district initially said it would allow students and staff the option of not wearing a face mask Monday.

In a website posting on Sunday, Patchogue-Medford told district parents that, given the warm weather expected this week and through the end of the school year, superintendent Jones had decided to "offer all staff members and students the option of continuing to wear a mask, based on their individual comfort level with the proposed guidance."

Sachem made a similar announcement on its website: "The Sachem Board of Education voted tonight to make masks optional in our schools for students and staff effective June 7, 2021. Students should still wear masks on the buses to and from school. Emails to all families is to follow."

In a letter to parents Sunday, Massapequa said it, too, was lifting the mask mandate on Monday, stating among other things that indoor masks would be "optional."

In a Monday message to the school community, district Superintendent Lucille Iconis said the district was reinstating the mask mandate on Tuesday. She said the district heard from a Cuomo representative who "made it clear that the district would incur sanctions for noncompliance, which would include but not be limited to monetary fines, school closures, and the ability to operate in person."

Meanwhile, COVID-19 indicators continued to register at low levels across the state.

The number of new confirmed coronavirus cases was 30 in Nassau, 39 in Suffolk, and 170 in New York City.

Across the state, nine people died Sunday of causes related to the virus, including one in Suffolk.

Cuomo also said Monday that once 70% of New Yorkers aged 18 and older receive at least one vaccine shot, many of the remaining restrictions involving mask wearing, social distancing and venue capacity will be lifted.

Currently that figure is at 66.3%, according to state figures.

State: School mask requirement remains in place for nowLong Island students have to wear masks to school today because the state has not formally changed its school mask mandate, despite an announcement Friday that it planned to lift school mask requirements at the start of the week. Parents, educators worried about kids making up learning lossLong Island's 124 districts are addressing the issue in their own way, some starting Saturday academies, adding after-school extra help, and restructuring summer school. Do you need a mask? Here's a guide to policies at stores around LIWith the new CDC mask guidance in effect in New York, Newsday has compiled a list of mask policies at some of LI's largest retailers. See the percentage of LIers who are fully vaccinatedCheck the latest numbers on how coronavirus has spread in your community.