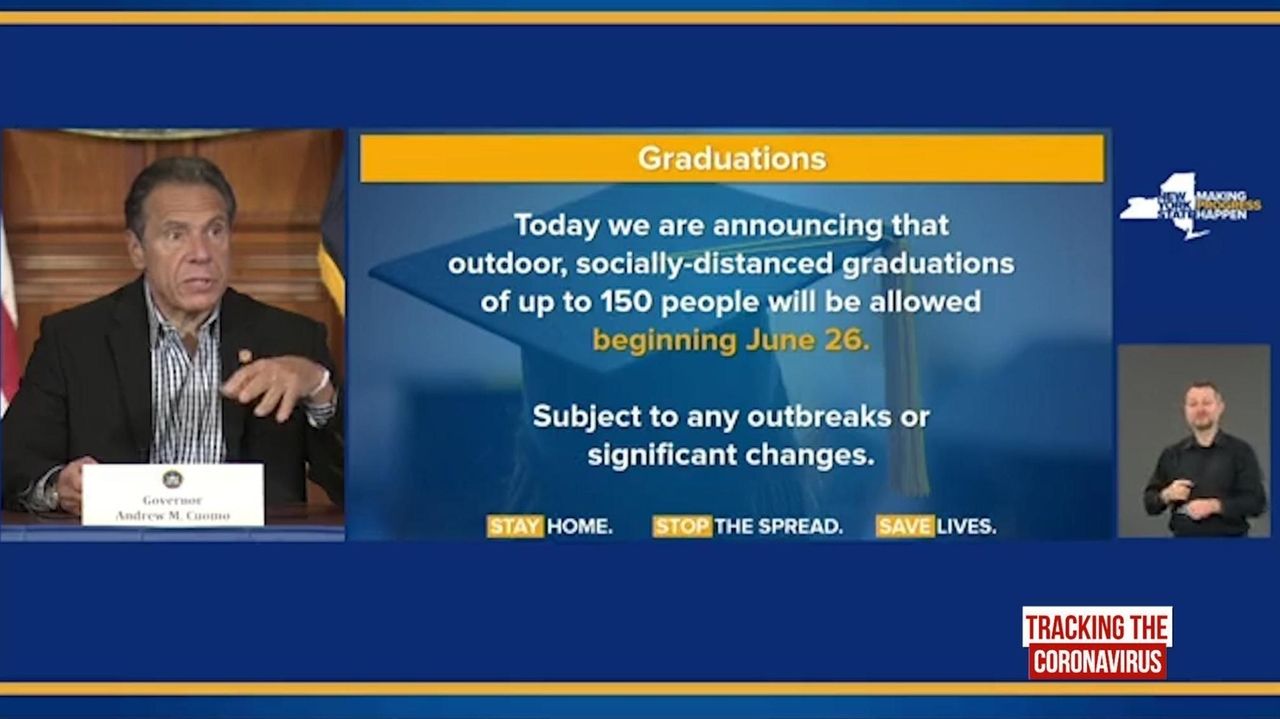 This story was reported by Matthew Chayes, Vera Chinese, Jesse Coburn, Lisa L. Colangelo, Michael O'Keeffe and Joie Tyrrell. It was written by Colangelo and Tyrrell

Cuomo said the graduations will be limited to 150 people but it was immediately unclear whether that included students as well as family and faculty.

Ceremonies will be allowed at that time if the number of COVID-19 cases across the state continues to decline, he said.

“It gives us a couple of weeks between now and then, God forbid, the number changes,” Cuomo said during his daily news briefing. “But schools need to plan. With the progress we’ve made so far and if we continue this trajectory, we’ll be able to do that.”

“I’m speaking to school officials who have very good plans on how we can do this," she said.

"But it is still important to reach the ultimate goal of having the entire Class of 2020 graduating together,” Kaminsky (D-Long Beach) said in a statement.

Cuomo said of 60,000 COVID-19 tests given across the state on Saturday, only 781 yielded positive results.

Jericho High School held a social-distancing graduation ceremony for its seniors this past week where graduates walked solo in cap and gown alone across the stage to pick up a diploma in an empty auditorium and were then photographed outside with their parents, Superintendent Henry L. Grishman said Sunday.

That event will be included in a video montage with other senior speeches and songs that will be released on the morning of graduation June 26. The governor’s announcement will not change those plans and the high school, with just under 300 seniors, is hoping to have a ceremony that all can participate in on Aug. 8., Grishman said. For districts such as Jericho with a large graduating class, the logistics would be a challenge.

“If we were trying to hold graduations with 150 maximum, it would mean 50 kids and 100 adults and that would mean six separate graduation ceremonies,” he said. “And that is with each kid having two parents come and that is not counting the staff members.

“We are holding onto the possibility of having some form of outdoor graduation on August 8 and that will depend on the number of people who will be able to get together in one event,” Grishman said.

The William Floyd school district made plans weeks ago consistent with the guidance released by the governor on June 4. The June 27 event — a curbside graduation — is scheduled to be a weeklong effort taking place over five days to accommodate the district’s 600-plus graduates, in which seniors and members of their family will arrive to the high school north entrance by car — with only the graduate getting out to pick up their diploma cover, having their name announced and posing for a photo that will be available for free download after the graduation ceremonies

With the latest announcement, school officials there said Sunday they will discuss their plans this week, according to district spokesman James Montalto.

Garden City High School senior Jamie Besendorfer, 17, said there are still plans under consideration for commencement with a final decision expected in mid-June. There may be an event with smaller groups or a postponement until July, which would allow a larger group to attend.

“I would say I am very hopeful that there will be some sort of special celebration no matter how it plays out but I will keep my fingers and toes crossed that we will have a bigger celebration,” said Besendorfer.

Victoria Pegg, whose daughter Gabby Velazquez is a senior at Newfield High School in Selden, said the district should use the high school football field so all the students could celebrate together at graduation.

"The kids will be very cautious," she said. "They would follow the rules. They want this so bad. We all want this so bad. You could spread out the chairs six feet apart. You can have them wear masks… I really think you could do this.”

Ashley Wall, 18, a senior at Newfield High School, said Sunday that she is part of a group of people planning to rally outside the county offices in Hauppauge on Friday calling for outdoor graduations that include more than 150 people.

Long Island is still on track to enter Phase 2 of reopening Wednesday, as its numbers of infections and hospitalizations continue to trend downward. Under that phase, retail stores barbershops and hair salons can serve customers inside the stores with special precautions. It also allows real estate services, office jobs and administrative work.

Curran said three people in Nassau County died of coronavirus Saturday and 56 new cases were reported. The county had recorded zero deaths for the first time in 81 days on Friday.

Suffolk County Executive Steve Bellone said at his Sunday COVID-19 briefing that the number of people hospitalized with virus in the county was under 200 for the first time since mid-March. The county’s peak number of hospitalizations was 1,658 on April 11, officials said.

“Today is a bit of a milestone for us,” Bellone said.

“We are now down to 179 people [hospitalized] in Suffolk County with COVID 19,” he said. “That is a decrease of 21 from the prior day [June 5]. So that is great news that these numbers continue to decline.”

Eight people died on Saturday he said, bringing the total number of COVID-19 fatalities in Suffolk to 1,931.

“That is certainly not a number we saw at the height of this but the numbers have been lower than this for the last week or so and it was my hope that we would stay at that low level and down to zero,” he said.

While New York City is on track to start its reopening process on Monday with Phase 1, Cuomo said there is still a concern that days of massive protests could have helped increase the spread of COVID-19. He said the state will test 35,000 people a day in the city to get a snapshot of the infection rate.

“We will watch it on a daily basis to find out exactly what is happening,” he said.

New York City Mayor Bill de Blasio also said officials are looking for any impact of the protests on an uptick in virus transmission.

The state estimates the city will take two weeks to advance to Phase 2, but de Blasio said more time may be needed.

“We were the epicenter, and remain the epicenter of this disease in this state. Our reopening is much more complex than any other part of the state," de Blasio said. " ... We’re gonna be watching very carefully what’s happening with our indicators and thresholds. If we don’t like what we see, we are gonna slow down the pace. If we do like what we see, we might be able to go even faster.”

The effort, organized by the Zakat Foundation of America, a nonprofit charity based in Illinois, particularly seeks to help those impacted by the coronavirus pandemic.

“It is important to support our community,” said Mohammad Imran Hossain, a regional development specialist at Zakat who oversaw the distribution work on Sunday.

Workers unloaded boxes of fresh apples, zucchini and other produce from a flatbed truck. Luis Mendez, a founder of Empowering Young Professionals of Long Island, picked up 15 boxes. He said his organization would pair the produce with rice and beans and give it out it to dozens of Long Island families on Sunday.

“The need is big,” Mendez said, noting many people have lost their jobs during the pandemic.

Many state beaches and parks filled up quickly Sunday as people looked to take advantage of the sunny skies and warm temperatures. Capacity at all sites has been slashed to make room for social distancing. Jones Beach fields 2 and 6 were closed by 11 a.m. and Robert Moses State Park just past noon.