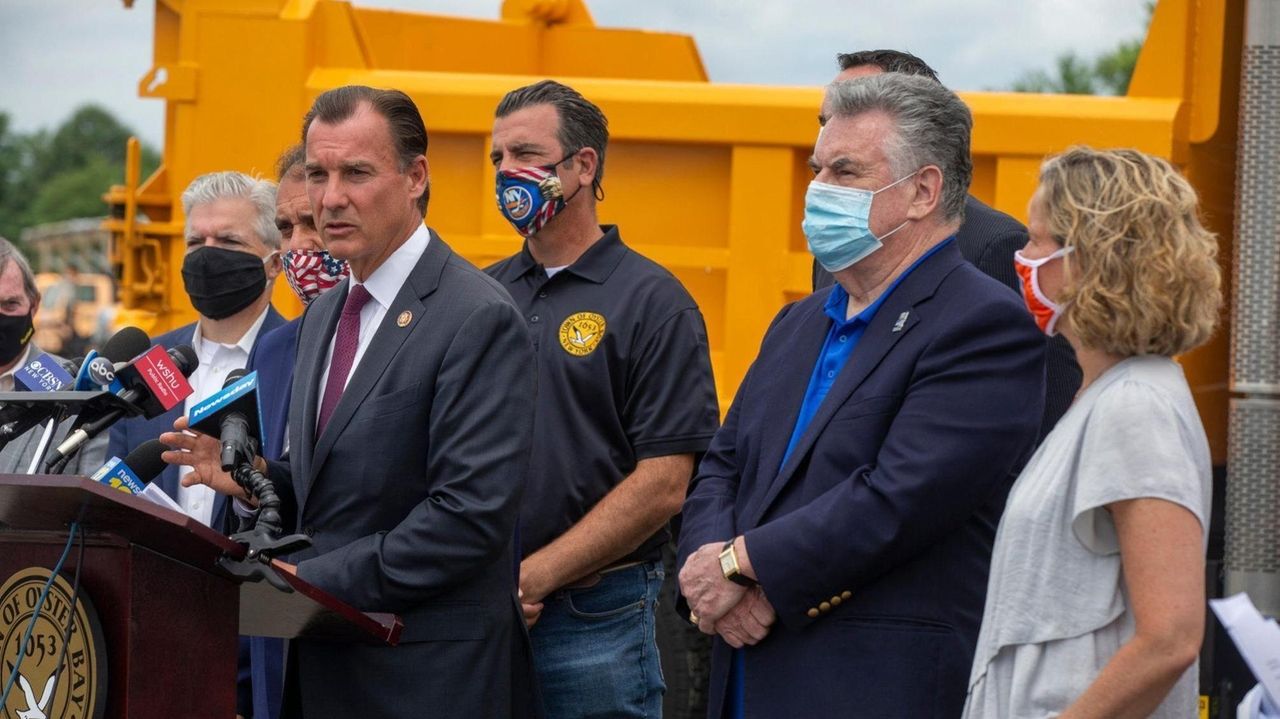 Long Island elected officials, both Democrat and Republican, on Wednesday called on the federal government to allocate federal funding for direct aid to local governments to help alleviate the loss of revenue because of the coronavirus. Credit: Newsday / Raychel Brightman

A bipartisan group of Long Island elected officials on Wednesday urged the U.S. Senate to provide aid to state and local governments in the next round of federal COVID-19 relief.

“Democrats and Republicans are 100% united here on Long Island that we need the federal government to deliver aid to our state, to our counties, to our towns, to our villages and to our school districts,” Rep. Tom Suozzi (D-Glen Cove) said at a news conference at Oyster Bay’s public works facility in Syosset. “We're all in this together … This is not a partisan issue.”

The Democratic-led U.S. House of Representatives passed a relief bill in May that would create a $49 billion fund for state aid to be allocated based on a state's rate of infection. It also provides $87.5 billion in aid to municipalities with more than 50,000 residents and $37.5 billion in aid to municipalities with fewer than 50,000 residents. The aid is intended to relieve some of the economic damage caused by the shutdowns and job losses that have reduced sales and other taxes collected by states.

The bill, which is known as the HEROES Act and includes about $3 trillion in spending, received a cold reception from Senate Majority Leader Mitch McConnell (R-Ky.) who in June called it “political theater” from the Senate floor.

McConnell said last month that a new pandemic relief bill should include liability protections for companies and organizations that reopen. A McConnell spokesman did not return a request for comment Wednesday.

Rep. Peter King (R-Seaford) said COVID-19 had been “absolutely devastating” to local governments and should not be a “blue state, red state” issue.

“The fact is, though, Sen. McConnell in Kentucky tries to make this a partisan issue, which is wrong,” King said at the news conference. “The fact that the virus is now hitting so many of the so-called red states may cause them to be more realistic and honest about the need to get this aid.”

Long Island elected officials from both political parties joined in calling for Washington to approve aid to state and local governments.

New York’s state budget anticipated an $8.2 billion reduction in local aid due to lower tax collections. It was to be detailed in a plan by the end of June that has been delayed because the state budget office is waiting to see what kind of aid Congress approves, according to a July 8 budget notice. In the meantime, the state has begun withholding “a minimum of 20 percent of most local aid payments,” withholding $360 million of local aid from April through June, according to the notice.

Moody's Investors Service said in a July 8 report that additional federal aid to state governments was a "wild card" with the House bill unlikely to pass the Senate in its current form. But Moody's noted that "the increase in coronavirus cases across most of the country and the associated slowing of state reopening plans may spur federal action in the form of a new coronavirus relief bill."

Suffolk County Executive Steve Bellone, a Democrat, said it would be "unconscionable" for the federal government to force local governments to bear the full brunt of the economic damage caused by the pandemic.

"This is not a bailout, this is a response to a natural disaster, and there's a cost to that," Bellone said at the news conference. "And the cost was shutting down this economy."

"Without an increase in aid from the federal government, local governments will face unprecedented economic damage," Saladino said. "We can't let that happen."