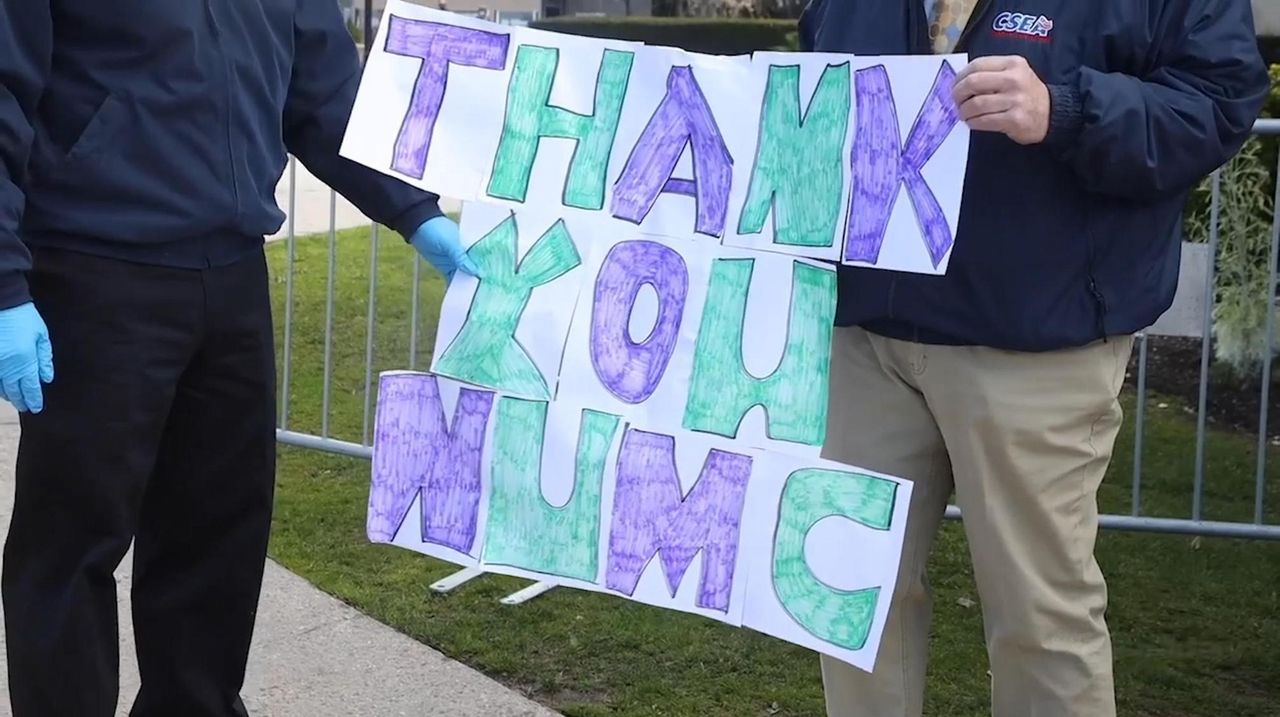 See moments from a few of the celebrations held to honor front-line medical workers on Long Island over the past week. Credit: Newsday, James Carbone, Howard Schnapp

That's how communities have been thanking health care workers on the front lines of the coronavirus pandemic at a time when social distancing means no handshaking or hugging.

Nurses, aides and doctors, as well as security guards, janitors and other hospital and nursing home staff, have endured longer and busier shifts since thousands of Nassau, Suffolk and New York City residents have been hospitalized with COVID-19.

The gestures of support for overstressed and overworked hospital staff don't go unnoticed.

“It’s stretching our staff thin, way beyond anything they’ve seen before in their medical careers,” said Joe Calderone, spokesman for Mount Sinai South Nassau in Oceanside, of the pandemic. “When they see a caravan out front — and they’re able to take five minutes to go out and wave — it gives them the strength to go back in and keep at it.”

A parade of 400 cars, including 20 firetrucks from surrounding towns and dozens of police vehicles, recently surprised workers at Mount Sinai South Nassau. Children held up homemade signs referring to the hospital workers as heroes.

“There’s a pent-up community demand for saying thank you,” said Anthony Cancellieri, organizer of the parade and vice chairman of the board of directors for Mount Sinai South Nassau. “They want to do something. They want to say more. They want to let the people working in the hospitals know that they’re behind them and they appreciate them.”

In New York City, there’s been a growing call to organize a ticker-tape parade for health care workers after the pandemic ends. Parades down the “Canyon of Heroes” in lower Manhattan have been a longtime tradition. In recent years, they've been held almost exclusively for the city's championship sports teams. In the past, the parades also honored military veterans returning from war and other notable people.

Mayor Bill de Blasio did not return a request for comment on the possibility of holding a parade for health care workers.

Nassau spokeswoman Vicki DiStefano said the county doesn’t have a similar parade or event in the works. But, she said, county residents have been encouraged to cheer for essential staff every night at 7 p.m. The county also launched a “Nassau heroes” program on social media where people can submit photos of residents who are going above and beyond to make a difference.

“Just like 9/11 changed our lives, this is changing our way of life,” Oliveri said. “You signed up to help people, but you never expected this. It’s quite an eye-opener and it’s scary."

To bring some comfort and lift spirits, Oliveri has organized firetruck parades for front-line health care workers, most recently, the staff at Momentum at South Bay Rehabilitation and Nursing in East Islip.

In some cases, the community outpouring has gone beyond flowers and parades to include essentials for hospital workers with little time to shop.

Mount Sinai South Nassau staff recently received 500 bags of groceries — made possible through monetary donations — to save them a trip to the supermarket, Calderone said.

At Huntington Hospital, the doorways in various units are decorated with hundreds of thank-you cards from preschoolers and members of houses of worship, said executive director Nick Fitterman.

Recently, drivers lined up along a road adjacent to the hospital during the 7 p.m. shift change for nurses and those inside the vehicles cheered.

Through donations, a Facebook group called Huntington Hospital Meals has raised $100,000 to cover daily meals for the staff across 35 departments and four shifts.

"When they're under the duress and stress of the pandemic, it helps them reestablish a sense that people outside the walls of this hospital appreciate what's going on inside here," Fitterman said.

Displays of thanks help hospital workers feel like the public "gets it" and gives them hope,  he said.

The show of support comes in smaller, quieter ways, too.

Barbara Silhan, the community liaison at Momentum at South Bay Rehabilitation and Nursing in East Islip, said she recently saw a banner at a downtown business thanking front-line medical workers.

“You don’t think a sign does something for you, but it does. It gives you a sigh of relief,” Silhan said. “When the community responds to tell you you’re not being taken for granted, even if only for those few minutes, it makes the job better. You can’t buy that.”