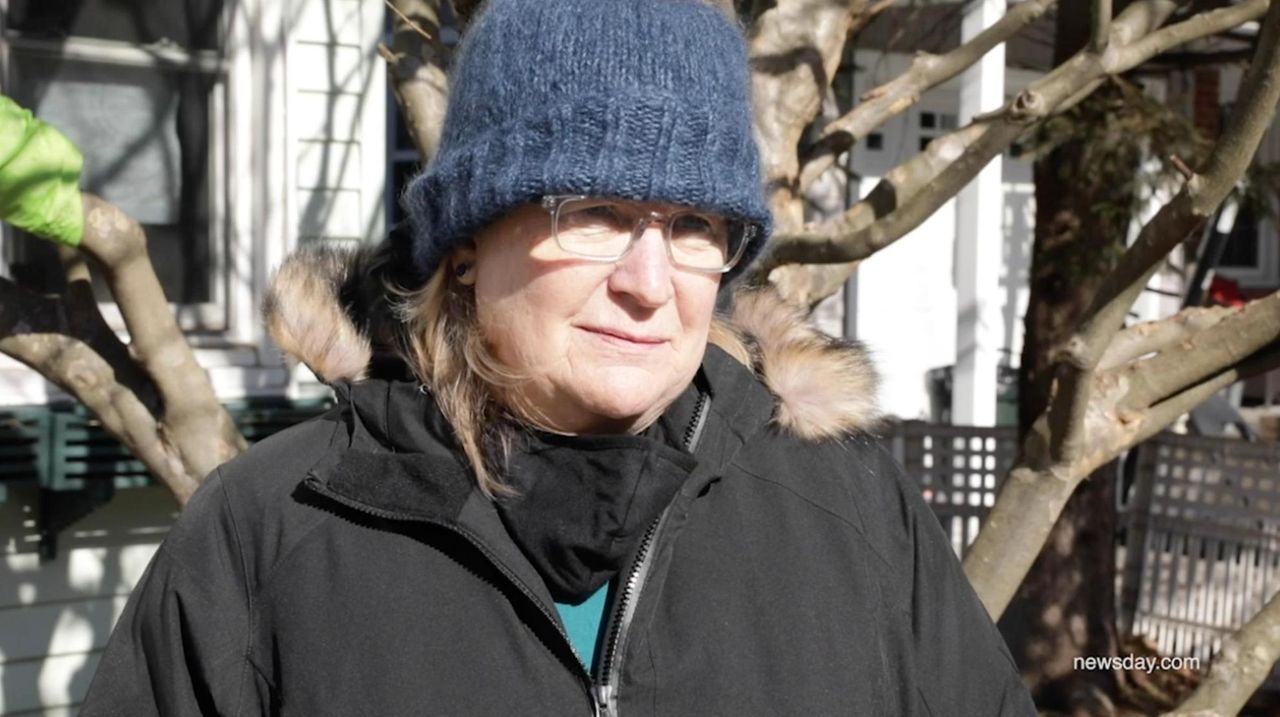 Frustrated with the shortage of vaccine appointments on Long Island, many are planning trips upstate for the vaccine. Diana Otte of Port Washington has a trip to Plattsburgh scheduled for the end of March, while Peter Bartfeld and Teri Schure of North Woodmere, who were also planning a trip to Plattsburgh, were able to find an appointment closer to Long Island. Credit: Newsday / Reece T. Williams, Steve Pfost; Howard Schnapp, Phizer, Barry Sloan

Plattsburgh, a city of approximately 20,000 people about 22 miles south of the Canadian border, is an unlikely locale to attract a steady stream of Long Islanders in the dead of winter, when the average high temperature there hovers around 26 degrees.

The city is about a six-hour drive from the Island, while its single-runway airport largely attracts visitors from Montreal.

But "Lake City," as the locals call it because it sits on Lake Champlain, has something Nassau and Suffolk residents can only dream of: an available supply of the COVID-19 vaccine.

And with doses of the vaccine hard to get downstate, desperate Long Islanders are reluctantly packing their bags, filling up the tank and heading far north to secure an elusive appointment for inoculation.

"I just want to be safe as soon as possible," said Bridget Berbrick, 65, a retired public schoolteacher from Melville who has a March 20 appointment in Plattsburgh, where her sister lives. "It’s obvious there’s just not enough vaccine."

The 700-mile round-trip drive, which would need to be taken twice because the Pfizer and Moderna vaccines require two doses each, is an indicator of how problematic the state’s vaccine allocation program has become — and the lengths to which some will go to get their shot.

Newsday has heard from dozens of Long Islanders — primarily senior citizens — who have become so frustrated by their inability to get appointments at mass inoculation sites such as Jones Beach or Stony Brook University that they’re willing to make long trips to upstate locales such as Plattsburgh, Binghamton and SUNY Potsdam, where the vaccines are generally more available.

'Whatever it takes to get vaccinated'

"I spent two weeks on the computer at 5 a.m. and at midnight and could not find anything," said Lorraine Kelley, 69, of Huntington, who along with her husband, Richard, 81, were vaccinated in Plattsburgh last weekend. "For two weeks, it just consumed me. So at that point I just said, ‘Better to get it than to keep trying and go crazy.’"

Nance Hinchliffe, 69, of Huntington, who will be vaccinated at SUNY Binghamton on Feb. 27 with her husband, David Hinchliffe, 70, said there needs to be a better way to get a shot.

"I am going to do whatever it takes to get vaccinated and to get my family vaccinated," Nance Hinchliffe said. "So I will do the extra mile. I just don’t feel that it should be as cumbersome of a process."

Veronique Bailey, president of the Huntington branch of the NAACP, said residents of many impoverished communities, who have been particularly hard hit by the pandemic, have neither the ability nor resources to travel upstate to get the vaccine.

"Many are working and cannot afford to do a 4- to 8-hour drive to get a vaccination," said Bailey, who wants to see more vaccine sites open in minority communities. "Many of these individuals are waiting around for the opportunity because they don’t really have another place to go to locally."

The trip upstate is not without its own potential liabilities when it comes to social distancing.

There’s the anxiety of stopping for lunch, using a restroom or sleeping overnight at a hotel when making the drive in one day is not practical. And that’s to say nothing of the potential for a mechanical breakdown in the middle of winter and a pandemic.

Despite the inconvenience and risks, Candace Parsons, 72, of Bayville, and her daughter, Greta Kelly, 45, a preschool teacher from Oyster Bay, said they are relieved to have March 13 appointments at Binghamton — a roughly 220-mile ride in each direction.

But Parsons, a retired mental health therapist, argues there must be a better way to inoculate Long Islanders.

"It was a tough decision, but we couldn’t get anything locally," Parsons said. "It’s really frustrating that we have to travel that far just to get an appointment."

Others are more blunt.

"This is absurd," said Peter Bartfeld, 70, of North Woodmere, who canceled his March 31 appointment in Plattsburgh with his wife, Teri Schure, 67, after they secured appointments at Aqueduct Racetrack on Jan. 29. "It’s a failure of the system. It’s Kafkaesque or Rube Goldberg-esque."

Many Long Islanders said they are continuing to look for appointments closer to home in the coming weeks — with the goal of ditching upstate bookings — but have found no spots.

Gov. Andrew M. Cuomo has blamed the lack of available appointments, particularly on Long Island and in New York City, on a diminished federal supply of the vaccine, which has forced some cancellations. The shortage also compelled New York City to delay the opening of mass vaccination sites at Yankee Stadium, Citi Field and Empire Outlets on Staten Island.

On Long Island, vaccine locations operated by Suffolk and run by Northwell Health in Nassau are totally booked as well.

The state currently receives about 250,000 doses of the vaccine each week — down from about 300,000 several weeks earlier — but can administer significantly more through its network of more than 3,700 provider sites, Cuomo said.

President Joe Biden announced Tuesday that federal allocations of the vaccine will increase by roughly 16% in the coming weeks, potentially easing the shortages nationwide and across the state.

He noted that for nearly two weeks, the state’s vaccine sign-up site has shown eligibility only in Plattsburgh and at the SUNY Potsdam Field House, a roughly seven-hour drive from Long Island.

The solution, Bartfeld said, is obvious.

State officials said if they see a weekly trend where appointments at certain vaccination sites are not being utilized, they will consider rebalancing the allocation.

"We allocate doses based on regional population, and our state-run mass vaccination sites are spread across the state to ensure everyone has access to them," said Gary Holmes, a State Health Department spokesman. "These sites’ goal is to vaccinate the region they are in, and of the nearly 600,000 appointments that have been made at state-run sites, roughly 75% are for New Yorkers from the site’s region."

If New Yorkers in one area are not booking all available appointments, Holmes said, "and someone is willing to travel to get a shot, that only reflects the woefully inadequate supply of vaccines we received from the Trump administration. Thankfully, we have already begun to see some progress under the Biden administration."

Meanwhile, Long Islanders say they are making do with the slots that are available.

Lina Tamayo, 21, a preschool teacher deemed an essential worker from Valley Stream, said she checked state eligibility websites on a virtually hourly basis for more than a week but was only able to get an appointment at SUNY Binghamton in April.

Diana Otte, 66, of Port Washington, is taking the process in stride. Otte, a preschool teacher who took a leave of absence during the pandemic, has a March 27 vaccination appointment in Plattsburgh with her husband, George Otte, 67.

"It is what it is," said Diana Otte, who shares a home with her husband, their son, his girlfriend and her grandson. "There is an awful lot of people that need to get vaccinated. Should it be this way? No. But we are not mad. It’s just going to take some time, I guess."