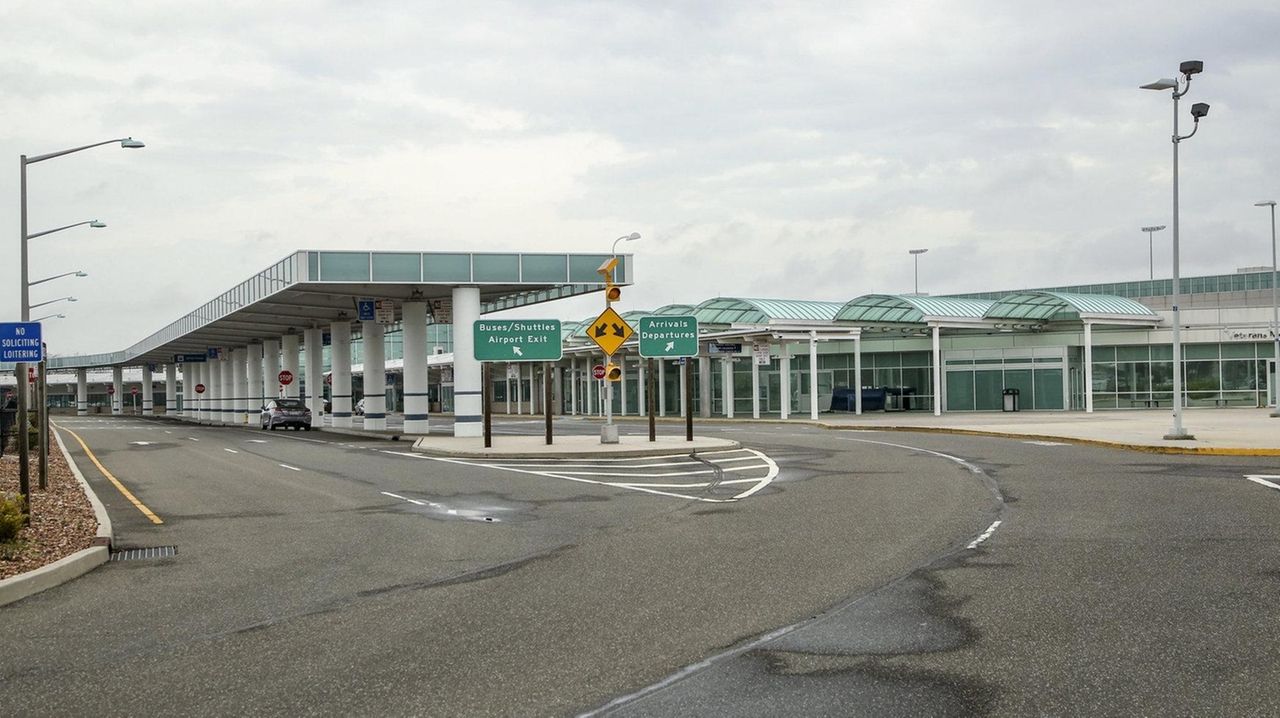 Long Island MacArthur Airport is the first in the world to use a new technology that decontaminates the air and surfaces at its terminals, says Edward Shelswell-White, chief customer officer for Sky Synergy. Credit: Randee Daddona

Boosted by $7 million in federal stimulus money, Islip Town officials say they are working to reassure passengers that it will be safe to take flights out of Long Island MacArthur Airport when the economy reopens and travelers resume flying.

The town-owned airfield in Ronkonkoma has seen steep drops in flights and revenue as airlines that had been flying high in January suffer cataclysmic economic losses from the coronavirus pandemic.

Islip officials said they are confident MacArthur will bounce back quickly, and they've taken steps to enhance safety at the airport, recently installing an air-purification system in the terminal to allay concerns about the virus.

"We’re going to be ready for people when they want to fly,” airport manager Shelley LaRose-Arken said Tuesday in an interview.

But when passengers return to the friendly skies is anybody's guess, and many industry officials are pessimistic.

Daily weekday flights at MacArthur have dropped by about 75% — from about 20 earlier this year to fewer than five. Landing fee revenue — one of the primary sources of airport income — dropped by about $300,000 in March as lockdown measures took effect.

The three carriers serving the facility — American, Frontier and Southwest airlines — all have sharply curtailed service.

American made its last flight from Islip on April 9 and doesn't plan to resume operations there until July 7, a spokesman said.

Southwest reduced daily flights at MacArthur from 11 to two. The carrier plans to boost flights to five per day in June and July, a spokesman said in an email.

Frontier Airlines did not respond to requests for comment.

LaRose-Arken said she thinks the rebound will happen sooner than later, saying the airline industry is “resilient.”

“We already see service increasing in June and in early July,” she said.

The challenges facing MacArthur are a microcosm of steep losses besetting an industry that began the year soaring to new heights of prosperity.

After growing about 5% in January and February, commercial air travel nationwide dropped 93% from mid-March to early May, according to Airlines for America, a trade group. More than half the nation’s commercial fleet is grounded, the group said.

Robert Mann, a Port Washington airline consultant, said the losses were “the most precipitous decline I’ve ever seen,” comparable only to groundings prompted by the Sept. 11, 2001, terrorist attacks.

“We’ve gone right past the sweet spot and into the abyss,” Mann said.

Between the stimulus funds and $7.6 million in reserves, MacArthur was able to offer 90-day rent deferrals to some of the airport's 35 tenants, including the airlines, fixed-base operators such as aviation maintenance and supply companies, and rental car operators, she said. None of the 83 town employees at the airport were laid off or furloughed.

Lost business at MacArthur has no impact on the town budget, Islip officials said, noting that by federal law the airport must be self-sufficient and cannot be subsidized by taxpayers. The airport’s $19.4 million annual budget is funded primarily by landing fees paid by the airlines and revenue from parking and car rental fees.

Projects to renovate the airport terminal have not been slowed by the pandemic, LaRose-Arken said.

To improve safety, the airport has stepped up cleaning of checkpoints, counters and bathrooms, and visitors must stay at least 6 feet apart, she said. The airlines require passengers to wear face coverings, and signs at entrances ask visitors to leave if they feel ill, she said.

Last week the airport installed an air purifier that uses a catalytic converter process to manufacture hydrogen peroxide, which destroys viruses, mold, bacteria and fungi, Islip officials said. The system, called Continuous Air and Surface Pathogen Reduction, or CASPR, has been used in hospitals but never before in airports, officials said.

But whether that will be enough to get Long Islanders flying again is an open question.

Rebuilding the industry will depend on passengers feeling safe entering terminals and spending two hours or more suspended 30,000 feet above ground inside airtight cylinders occupied by dozens of other people, Mann said.

Business flights will remain sluggish until companies lift restrictions on corporate travel, he said, adding that major carriers likely will restore business at major hubs such as Kennedy and La Guardia airports before focusing on regional airports like MacArthur.

“Only over time when demand is restored and traffic and airfares improve will secondary markets come back,” Mann said. “That’s not a forecast that I think anybody can reasonably make.”

Flights and revenue at Long Island MacArthur Airport have suffered during the coronavirus pandemic.