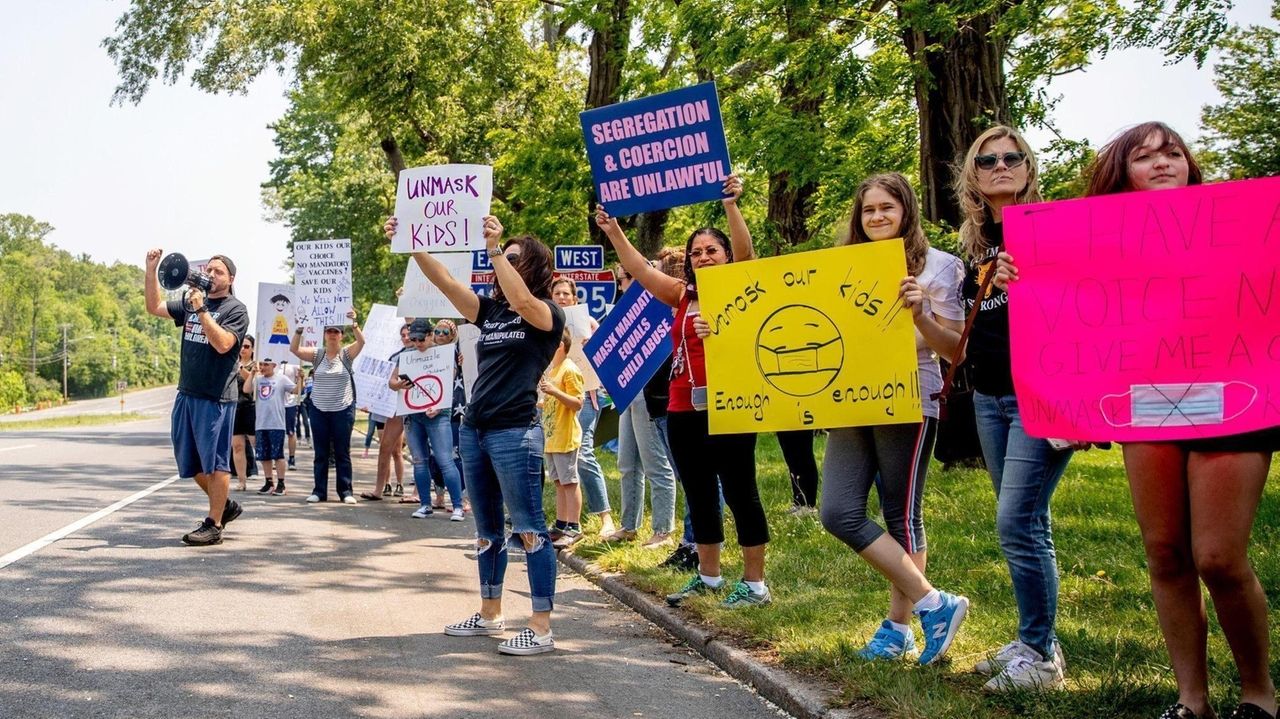 Nassau County Executive Laura Curran waded into enemy territory Wednesday — a rally run by her reelection opponent — to say she agreed with the group's call for an end to mask mandates in schools.

Bruce Blakeman, a Hempstead Town Republican councilman who is challenging Curran, a Democrat, in the November election, began his remarks by blaming New York State and "Mineola," the seat of county government, for mask mandates in schools.

"It seems to many people here that what is happening is government is trying to substitute their judgment for the judgment of parents, and that is completely wrong," Blakeman said.

In the middle of the Republican-led rally, Curran walked out of the county building and inserted herself between Blakeman and Elaine Phillips, the GOP candidate for Nassau County comptroller.

Curran replied: "In case you've been following, I've really been pushing through this entire pandemic for common sense protocols."

Curran continued: "The reality has changed on the ground. It is time for the mandates and the protocols to match reality."

Curran said she was, "pushing, and we push the state," to end mask mandates. "With your advocacy, with our advocacy, we will get this done."

Blakeman and others at the rally shouted: "Get it done."

As vaccination rates climb and infection rates drop, opponents of mask mandates say it's time to drop the requirement for schoolchildren and leave the decision to parents and individual districts.

The guidance for children has been shifting. On Tuesday, state officials said unvaccinated children ages 2 to 5 won't be required to wear masks at day care or summer camp, reversing a more strict requirement issued last week.

But the state's mask mandate in schools remains in effect.

In an interview with Newsday after the rally, Curran said she "felt it was a good opportunity," to join the news conference — "and, hey, it was right here at the office."

"I’ve got kids in school, and I completely understand where these parents are coming from," Curran said.

"The isolation, the inability to do normal things, we understand that for a period of time was necessary," she said. "But that time has passed."

Blakeman said in an interview later: "Bascially she’s following my lead, which is a good thing, which means I'm a leader."

"If the governor chooses to sue Nassau county, so be it," he said.

Carrying signs such as, "Stop the MASKquerade" and "Unmask the Kids," some said masks were interfering with their children’s education and were not needed now that vaccines were more widely available to adults.

"This past school year it’s just been, you know, practically them in a muzzle for six hours a day," said Brittany Grando of Islip, who has a son of grammar school age.