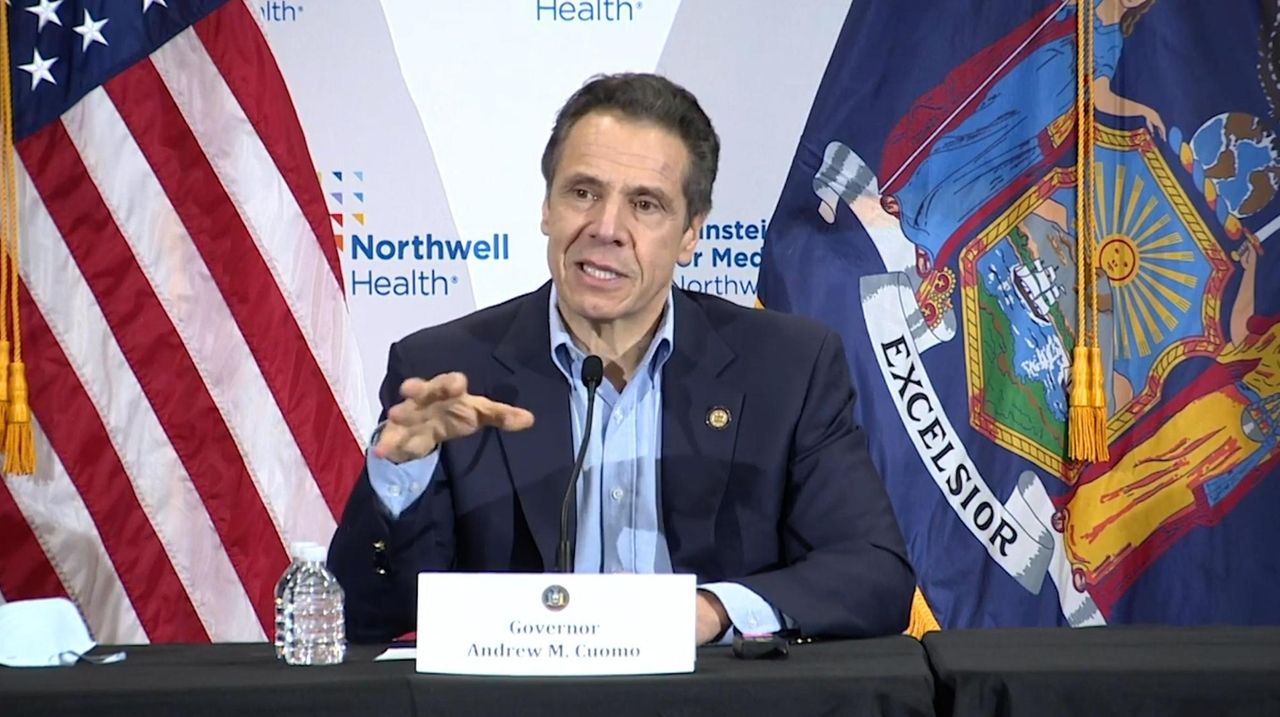 On Sunday, Governor Andrew M. Cuomo held a news conference at The Feinstein Institute for Medical Research in Manhasset. He talked about the latest coronavirus numbers, which show that hospitalizations are down, but the state lost 507 people on Saturday. Credit: YouTube / NYGovCuomo

New York will embark on an “aggressive” testing program to help determine the full scope of the coronavirus pandemic, a vital step as officials envision how to reopen the state’s economy, Gov. Andrew M. Cuomo announced Sunday.

The program starts Monday with a 3,000-person random survey across the state to determine how many people have COVID-19 antibodies in their system, a sign they had the disease but have since recovered.

"That will tell us, for the first time, what percent of the population actually has had the coronavirus and is now at least short-term immune to the virus," the governor said. “This will be the first true snapshot of what we are dealing with.”

Participants in the random testing will be recruited at supermarkets in different regions. Nassau County Executive Laura Curran said the testing would include an unidentified site in Nassau.

Those who agree to take part will be asked to provide a fingerstick blood sample, which will then be processed at the state’s Wadsworth Labs using its IgG immunologic test. The Food and Drug Administration recently approved the state’s own antibody test, Cuomo said.

Medical experts have raised warnings about flawed antibody tests that have not received FDA approval but have come to the market. The FDA has allowed more than 90 companies to bring tests to the market without federal approval, citing the urgency of the pandemic, according to The New York Times. Some of the tests being used around the country have mistakenly shown the presence of antibodies in a person when they don’t exist.

Cuomo said antibody testing is a way to assess how best to reopen.

“Any plan that is going to start to reopen the economy has to be based on data, and that means it has to be based on testing,” Cuomo said. “How do you get it up to scale quickly and how do you find out where we really are right now in terms of this virus?

The governor announced the plan after noting another day of improvements in the trajectory of the coronavirus, which has infected more than 242,000 people in the state, including more than 56,000 on Long Island. The number of people who were hospitalized or intubated was down, Cuomo said, suggesting measures put in place to combat the pandemic are working.

"The recent news is good. We are on the other side of the plateau and the numbers are coming down," Cuomo said. "But that's good news only compared to the terrible news that we were living with."

Another 507 people who had COVID-19 died Saturday, Cuomo said, and 1,300 people with the virus were newly admitted to hospitals.

"This is a reality check," the governor said. "With all the good news and the reductions, we still have 1,300 people that yesterday came in and tested positive."

State Health Department officials said the statewide survey of antibodies through testing will assess the proportion of people previously infected with SARS-CoV-2, the virus that causes COVID-19 disease, from locations around the state.

“The testing survey will sample 3,000 people for a population of 19.5 million people and will help determine the percentage of the population that is now immune to the virus, allowing more individuals to safely return to work,” the agency said in a statement.

Health officials said laboratory-confirmed cases only “represent a fraction of the total number of cases of COVID-19 in the population” because an unknown proportion of cases are mild or asymptomatic and not all persons seek medical care even if they have symptoms.

Suffolk Health Commissioner Gregson Pigott said health officials still do not know the level of antibodies required to be immune to reinfection.

“Once we’re starting to do antibody tests and find out how high the antibody level is, we can see who is protected from further infection,” Pigott said.

Cuomo said diagnostic testing, which determines whether or not a person is currently infected with the virus, also needs to be ramped up.

There are multiple diagnostic tests by different manufacturers that often require chemicals that are not readily available.

“I can’t do an international supply chain,” Cuomo said. “That’s where the federal government has to help.”

Trump, speaking at the daily White House Coronavirus Task Force briefing, pushed back on criticism from state governors who have argued that his administration has not done enough to aid states in securing supplies like testing swabs and reagent chemicals to ramp up testing.

“Our testing is expanding very rapidly by millions and millions of people,” Trump said. Moments later he pulled out a testing swab from his pocket to say the production of such swabs was “not very complicated.”

The president said he is also preparing to use the Defense Production Act to increase production of testing swabs.

“Remember that the governors wanted to have total control over the opening of their states, but now they want to have us, the federal government do the testing,” Trump said.

Trump later played an excerpt from Cuomo's Sunday news conference, in which Cuomo praised the federal government's response in helping to convert the Javits Center into a makeshift hospital.

"I just think it's so good because it's bipartisan," Trump said of Cuomo's comments.

The president thanked Cuomo saying “he’s worked very well with us" and said the governor delivered a "beautiful statement" on Sunday by asserting that no patient would be denied a ventilator.

Vice President Mike Pence, speaking at the briefing said "our large metro areas continue to stabilize and we can see progress."

"The New York metro area, including New Jersey, New York, Long Island, Connecticut and Rhode Island all appear to be past their peak," Pence said.

On Long Island, Suffolk County Executive Steve Bellone on Sunday said 132 people have died of COVID-19 in the county in the past three days, bringing Suffolk's total to 825.

“Those numbers speak for themselves and they are staggering," Bellone said during a Sunday afternoon briefing.

But Bellone noted that the numbers of people hospitalized or in intensive care because of the virus have dropped.

He said 1,441 COVID-19 patients were receiving treatment in Suffolk hospitals on Sunday, down 97 people from the day prior, Bellone said.

“That’s still an incredibly high number, make no mistake about it,” Bellone said. “But to see 97 fewer people overall hospitalized with COVID-19 is significant, and it’s significant it’s the fourth day in a row” of decreases," he said.

“We are hopeful as we move into the new week that the downward trend will continue."

In a Fox News appearance Sunday afternoon, Bellone said Long Island is “still in the heat of the battle.”

“For perspective, before this crisis, our hospitals had 2,300 beds to take care of every kind of illness,” Bellone said. “Fully 2/3 of those beds are occupied just by COVID-19 patients.”

In a statement, Curran said: " As of today, 1,281 Nassau County residents have lost their fights to the coronavirus and more than 30,000 [30,013] have tested positive, more patients and fatalities than any other municipality in the entire nation outside of New York City."

Bellone said he did not yet have details about how the antibody testing program would work on Long Island, but he called it "very important."

Northwell Health on Sunday morning said it has 2,616 COVID-19 patients at its 19 hospitals, which include 11 on Long Island. That’s down roughly 25% since the peak.

Only two of its hospitals, LIJ Valley Stream and LIJ Forest Hills, have an intensive care unit occupancy rate above 90%, said Terry Lynam, a Northwell spokesman.

Cuomo said the state needs support from the federal government on testing but also to deal with a huge drop in revenue caused by the pandemic.

"If we don't get federal assistance, you're looking at education cuts of close to 50% in the State of New York," and possible cuts to hospital funding as well, Cuomo said.

"President Trump, this is as simple as this: This is a moment you can actually help to save your hometown, or you can turn away and can fail to protect New Yorkers,” de Blasio said. “When New York City is in need, where are you?”

Senate opposition to the bill would evaporate if Trump got behind the measure, de Blasio said.

"Senate Republicans are standing in the way of the states and cities getting back on their feet," the mayor said. "The House [of Representatives] under the leadership of Speaker Nancy Pelosi is ready to move forward."

De Blasio said three indicators that gauge progress in the battle against the coronavirus pandemic in New York City showed mixed signals. The number of people in intensive care units was down slightly, as was the percentage of people who tested positive for the virus. But the number of people with the virus admitted to hospitals was up from 261 Friday to 317 Saturday.

"There needs to be caution because we are in the middle of this crisis," de Blasio said. "This disease is still out there."

Bellone also said Sunday he will send a letter to U.S. Treasury Secretary Steve Mnuchin — who has a home in Southampton — in a bid to provide temporary property tax relief to Suffolk County homeowners.

Bellone has said officials are looking at ways to push back the May 31 property tax deadline and waive penalties and fees for late payments. But he said the county cannot do so because of cash flow issues and a state law that dictates the property tax process.

One possible remedy would be access to the new Municipal Liquidity Facility, which was recently created by the Federal Reserve to ease cash-flow issues for state and local governments, Bellone said. The facility will purchase up to $500 billion in short-term borrowing notes, including bonds, from eligible municipalities.

Bellone said he is asking Mnuchin to allow counties with smaller populations to access that funding as well.

“If we have this access, we have that ability to provide property tax relief without doing any long term damage to taxpayers,” Bellone said.