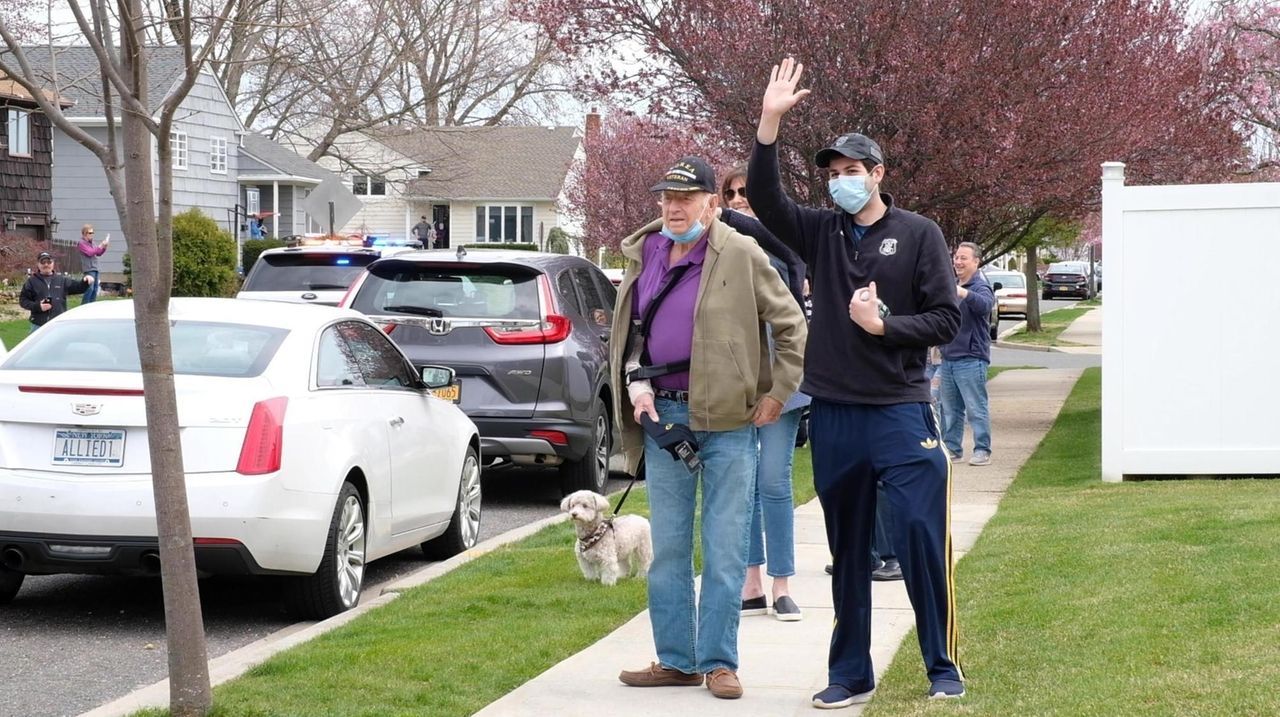 New York's battle against the coronavirus showed faint signs of success Sunday, with state, county and local leaders expressing cautious optimism about the pandemic's trajectory in the state even as the death toll continued to climb.

In Suffolk, the number of people hospitalized with the virus fell for the first time since the pandemic began, County Executive Steve Bellone said.

"That's a bit of light in the darkness we have been in," Bellone said during a Sunday afternoon briefing for reporters. He cautioned that the encouraging trend could prove to be an anomaly.

"There's still a long way to go here," he said. "We will see what data says in the next few days."

Bellone's counterpart in Nassau, County Executive Laura Curran, said in a Sunday CNN interview that more COVID-19 patients have been discharged from hospitals in the county than admitted for about six days in a row.

"That tells me we are really in a plateau, which is good news," she said.

Nassau on Sunday reported 969 new cases and 54 new deaths from the virus.

At his daily update on the outbreak in Albany, Gov. Andrew M. Cuomo said Sunday that the number of patients hospitalized with COVID-19 or discharged has leveled off in recent days — a signal the pandemic's growth in the state could be reaching a plateau.

"You're not seeing a great decline in the numbers, but you're seeing a flattening," he said. "That's the so-called flattening of the curve."

He noted Long Island's improvement, even as 114 more patients in Nassau and Suffolk counties succumbed to the virus Saturday, officials said.

"We were watching very carefully movement toward Long Island, which has abated somewhat," he said.

Those 114 deaths were among 758 statewide Saturday, Cuomo said, bringing New York's death toll to 9,385 and making clear the state is still deep in the midst of a public health crisis that has paralyzed life around the world.

"This is truly tragic news," Cuomo said of Saturday's deaths. "Every one is a face and a name and a family that is suffering on this weekend."

In New York City, Mayor Bill de Blasio said intubations in the city are down and hospitals have sufficient stores of key medical equipment to get through the next week.

About 70 people sick with the virus were intubated on ventilators each day in the city last week, down from 200 to 300 in previous weeks, the mayor said. And the city will have sufficient ventilators, gloves and N-95 and surgical masks to get through this week.

Despite de Blasio's relatively upbeat projections, a government source who asked not to be identified said the task of finding supplies remains daunting because of the high "burn" rate involved. 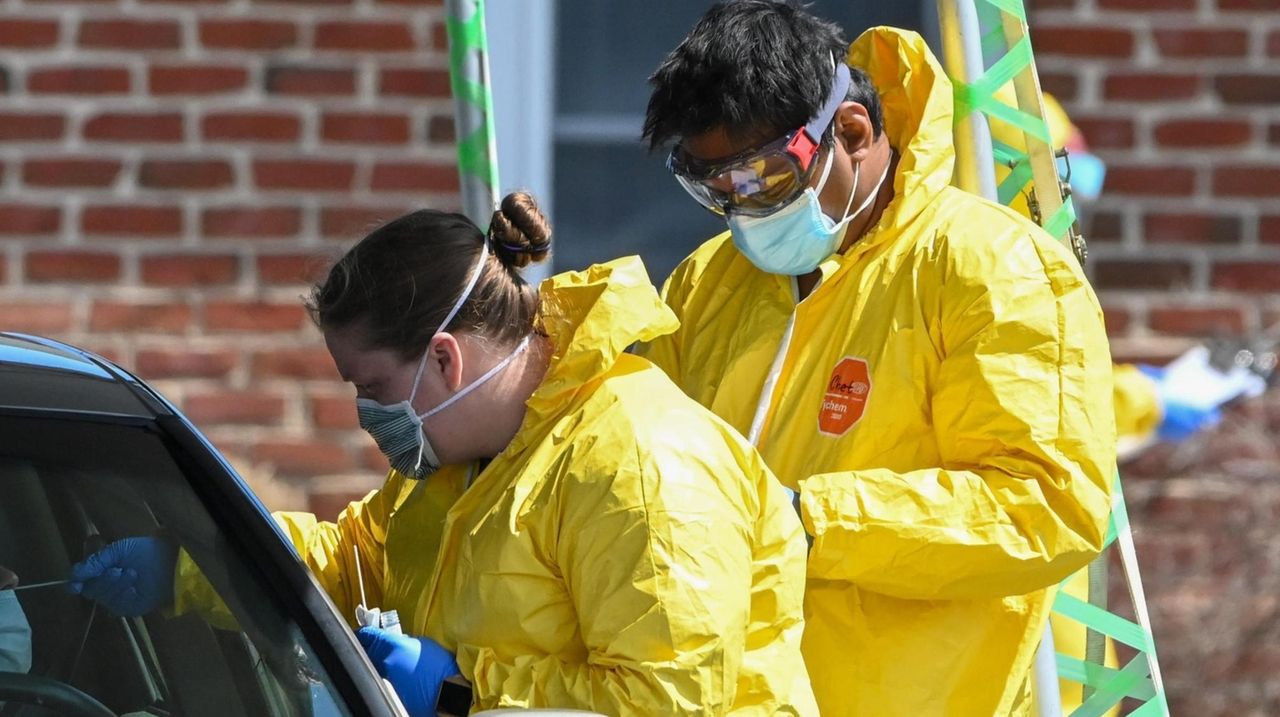 The city hospital system goes through more than 100,000 masks each day and gowns can be 10 times that number, the source said. The supply experts must find not only gowns and masks, but also bootees, caps and eye protection, the source said.

Northwell Health spokesman Terry Lynam on Sunday said the number of COVID-19 patients in the system's 19 hospitals dropped slightly Sunday to 3,299 from Saturday's count of 3,315.

Still, officials Sunday said serious challenges remain in the fight against the coronavirus, which has infected more than 188,000 across the state, including more than 44,000 in Nassau and Suffolk counties and more than 103,000 in New York City.

Chief among the challenges will be deciding when New York State should begin easing up on social distancing and stay-at-home measures put in place to impede the virus' spread, including orders shutting down businesses and schools. 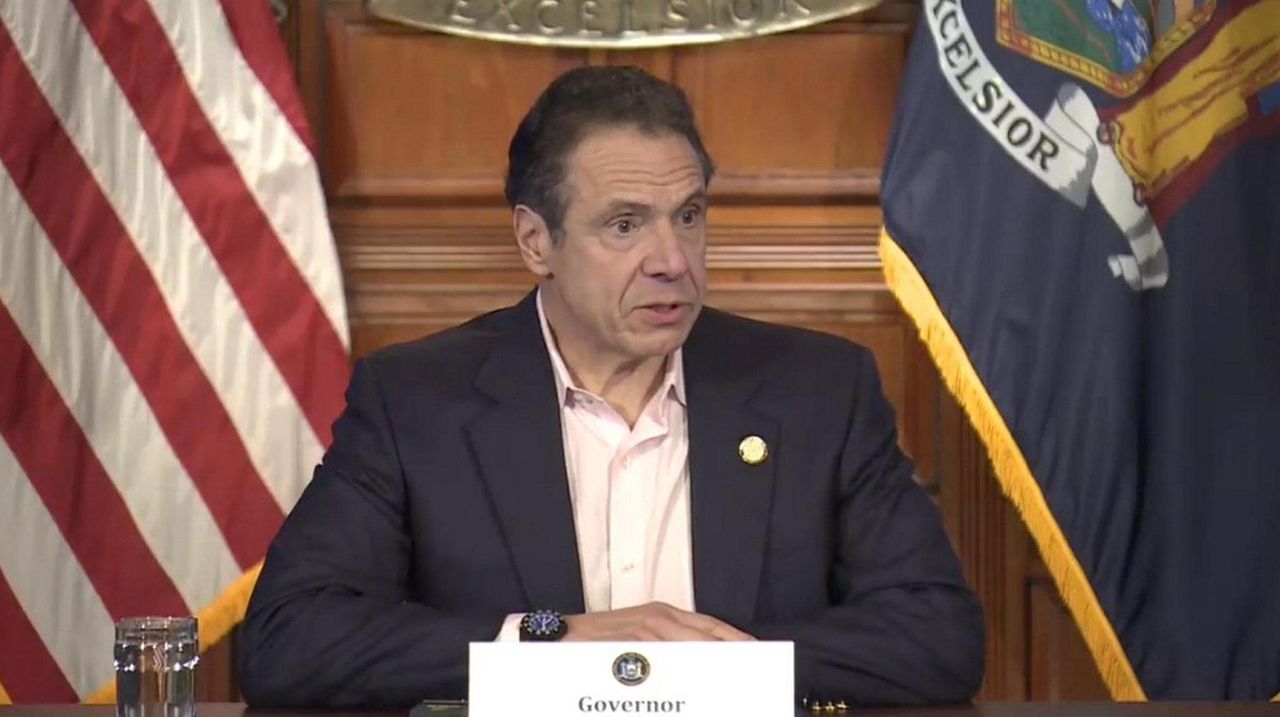 Cuomo: Hospitalization rate down; signs of virus plateau On Easter Sunday, Governor Andrew M. Cuomo talked about what might be a flattening of the curve and the executive orders he planned to sign, including one directing businesses to provide essential workers with cloth or surgical face masks when interacting with the public. Credit: YouTube / NYGovCuomo

The "big question is when do we reopen," Cuomo said. "We need the economy working. People need a paycheck."

Cuomo said the state should take a regional approach to reopening that coordinates between businesses, schools, transportation and workers, includes more and faster testing and draws on assistance from the federal government.

But Cuomo noted it would be difficult to reopen businesses without also reopening schools, as many workers would be hard-pressed to return to their jobs with children still at home.

The governor declined to say whether he believed schools should reopen before the end of the academic year.

"I do not know what we will be doing in June," he said. "I don't think anybody can make an informed decision right now."

The governor's remarks stood in contrast to de Blasio's announcement Saturday that New York City school buildings would remain closed through the end of the academic year.

"As soon as we were convinced it had to be done, it became important to tell our community and tell our parents that this was the decision, so people could plan accordingly," de Blasio said Sunday.

Curran, noting the friction between the governor and mayor, said she supported Cuomo's "regional approach."

Bellone said “we need much more data” and widespread testing to know when it would be right to let businesses reopen.

“We’ve lost more than 1,100 people on Long Island,” Bellone said. “We have to keep that in mind when we think about what the next steps are. We’re still in the phase where we’re fighting to save people’s lives.”

Cuomo also announced two new executive orders to fight the pandemic. One will expand who can conduct tests to see whether recovered COVID-19 patients have developed antibodies against the virus. Another will require employers to provide essential workers with face masks.

De Blasio announced a similar a citywide measure on face masks. Beginning Monday, all city workers must wear face coverings while on duty and interacting with the public, he said Sunday.

The move follows the release of demographic data showing that black and Hispanic residents of the city and state have suffered disproportionately in the pandemic, with higher rates of death from the virus than white and Asian New Yorkers.

"We cannot accept this inequality," de Blasio said. "We have to attack it with every tool we have."

"This week, we will get through," the mayor said. "Next week, we have real challenges we must address over the next coming days."

Former NYPD Commissioner James O'Neill, who is coordinating city efforts to find hospital supplies, said in an interview Sunday that only a day or two supply of hospital gowns remains in the inventory.

O'Neill said that dire shortage is forcing the city to look for substitutes. One law enforcement source, who did not want to be identified, said ponchos are also under consideration as an alternative if enough gowns cannot be found.

Bellone said officials began taking down tents at three new mobile testing sites in Huntington Station, Brentwood and Riverhead because of expected severe weather on Monday. Appointments made for Monday will be rescheduled, he said, and the sites should reopen Tuesday.

Lynam of Northwell Health, noted other challenges in the fight against the virus.

"Valley Stream and Forest Hills are getting slammed,” he said. “Queens and western Nassau remain areas of concern," as does the Brentwood area in Suffolk County, he said.

While about 23% of COVID-19 patients at Northwell hospitals are on ventilators, the figure was closer to 36% at Mather Hospital in Port Jefferson and Southside Hospital in Bay Shore, he said.

“It’s clearly an indication that patients there are sicker,” Lynam said.

Curran on CNN, noting the Easter and Passover holidays, urged people to continue resisting the desire to congregate.

"We actually had to have our fire marshals go and break up those few religious services that were still happening," she said. "If you want to protect the vulnerable in your family, in your congregation, in your community, the elderly, those with underlying health conditions, the best thing to do now is worship at home."

Officials on Sunday said the Christian and Jewish holidays, and the new season they usher in, should remind New Yorkers to remain hopeful even as they gird for a drawn-out fight against the pandemic.

"We have locked the doors, we've isolated, we've hunkered down — we've closed down in a way we've never closed down before," Cuomo said. "But we will come back to life and we will have a rebirth," he said. "That's what spring is all about."

Earlier in the day, the governor appeared at Pathways Nursing and Rehabilitation Center in upstate Niskayuna to thank the facility for donating 35 ventilators to be used downstate.

Schenectady County, where Niskayuna is located, has not been as hard hit as the downstate region, with just 194 confirmed coronavirus cases as of Saturday, according to the county website.

Still, Cuomo noted that nursing homes are an unlikely place to be donating spare equipment. Nearly 20% of New Yorkers who have died of COVID-19 have been nursing home residents, according to state Health Department data.