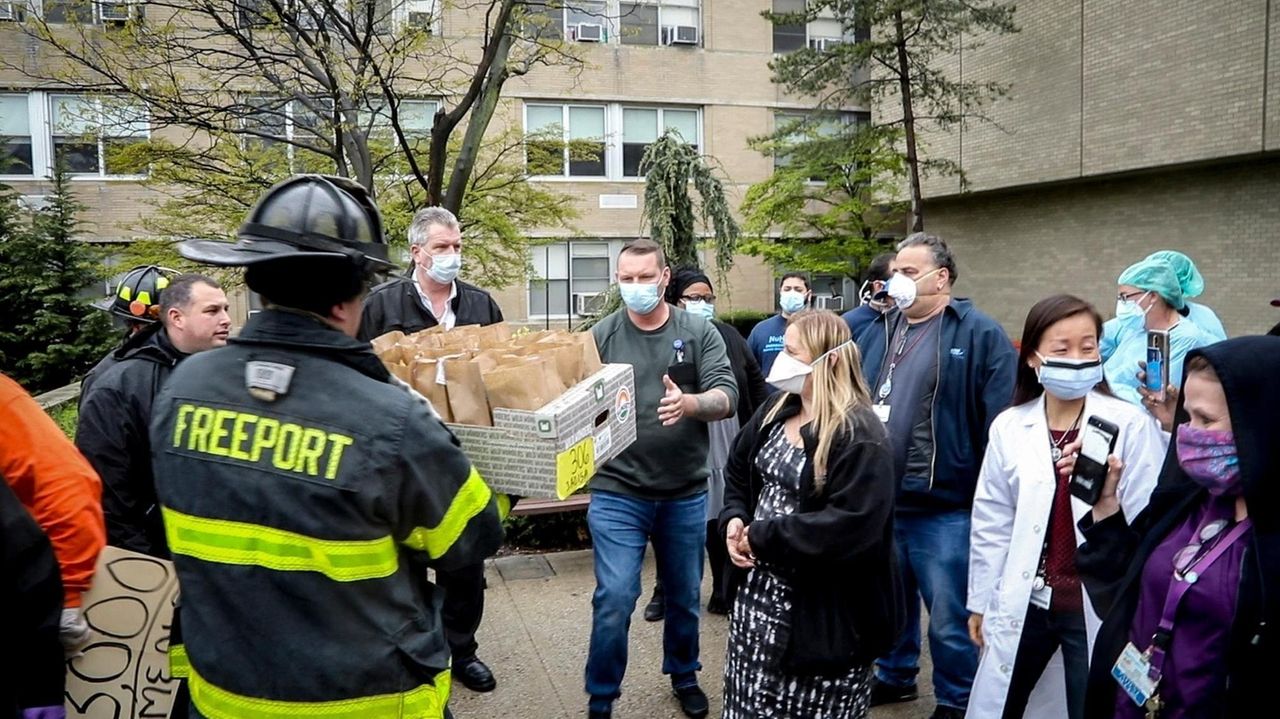 Kevin Calhoun pulled into Mount Sinai South Nassau Hospital one day with two boxes of donated medical gloves and some coffee, which he dropped off to a few emergency room nurses overwhelmed by the influx of COVID-19 patients.

The encounter gave the retired FDNY firefighter and 9/11 first responder an idea: restart his shuttered Freeport restaurant Halfway Down to make meals for COVID-19 first responders.

He remembered what a donated meal meant to him and other first responders during the months he spent at the smoldering World Trade Center site.

“Just getting a meal, not worrying about that, it was kind of a nice thing,” he said. “We appreciated it.”

On Friday, Calhoun and his colleagues delivered the 3,000th free sandwich they have handed out to nurses, doctors and other hospital personnel. It took place at a small ceremony at Nassau University Medical Center, where a few dozen doctors and nurses came to the entrance to thank Calhoun and his crew.

“It’s just amazing to think that in such horrible times like this that we still have people that are not concerned about themselves and are taking money out of their own pocket to make this food to give it to the first responders,” said Freeport Mayor Robert T. Kennedy, who attended the event along with members of the Freeport volunteer fire department who helped deliver the sandwiches.

Calhoun, 62, and two other retired FDNY members who have spearheaded the project donated $6,000 of their own money to pay for the sandwiches. They are co-owners of Halfway Down: Richard Duffy, 58, of North Babylon, and Tom Schule, 63, of Lynbrook.

They also have raised $4,500 through a GoFundMe page that will help pay the expenses.

“What a great gesture this was on Kevin’s behalf to invest that money out of his own pocket for the first responders,” Kennedy said. “It was heartfelt.”

Two members of Calhoun’s kitchen staff are volunteering their time to help prepare the sandwiches. And several patrons come in on Sundays to label the sandwich bags: Ham and Swiss cheese, turkey and American cheese, tuna fish wraps.

Some of the food is delivered at lunchtime but other meals arrive in the mid- to late-afternoon or even as late as 8:30 p.m. to accommodate different shifts.

Each meal is individually packed to avoid cross-contamination, which could happen if several people reached into a pizza box, Calhoun said. The meals include a sandwich, water, chips and brownies donated by another Freeport business, Love & Quiches Gourmet.

The whole project, started after that first encounter, “kind of just snowballed into this giant thing,” Calhoun said.

The free delivery service is helping him get through the crisis, knowing he is helping the first responders the way others once helped him.

How will homebound patients get the COVID-19 vaccine?
1:26 State sees decreasing virus positivity, but LI yields higher rate
4:01 COVID-19: From 799 deaths in one day to vaccine being 'passport' back to normalcy
Senate nears relief bill votes after half-day GOP delay
2:15 Johnson & Johnson vaccine has arrived on Long Island
What you need to know about COVID-19 vaccine development
Didn’t find what you were looking for?