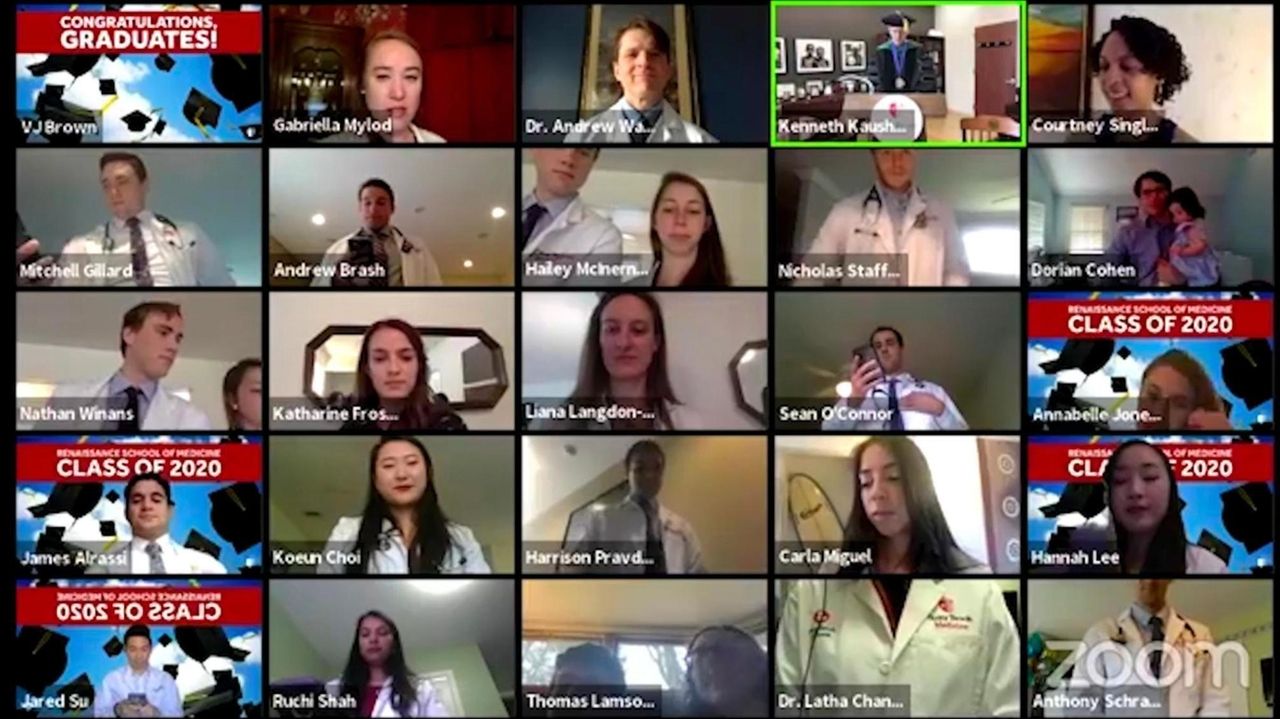 The shortage of physicians needed to combat the coronavirus led Stony Brook University’s medical school to graduate its class of 122 students early — from home — in an online ceremony on the app Zoom and telecast on Facebook.

The new physicians’ traditional recitation of the Hippocratic oath was digital — riven with echoes and audio screeches during the school’s first Zoom commencement. This class of 2020 was conferred degrees from an Island where more than 35,500 people have tested positive for the virus and 889 people have died.

“Your skills are needed urgently — more than ever before. Soon, you’ll join the front ranks to fight a pandemic that threatens to destroy not only millions of lives but the fabric of society itself,” said keynote speaker Dr. Michael Brown, chair in cholesterol and arteriosclerosis research and a professor at the University of Texas Southwestern Medical Center in Dallas. “Victory will depend on your dedication, your compassion.”

Stony Brook's medical school, which in 2018 was renamed Renaissance School of Medicine, joins others across the United States that pushed up graduation dates because of the pandemic. Across the country, in-person ceremonies of all sorts were canceled to comply with laws banning gatherings in order to stanch the virus’ spread.

New York University was the first to allow its medical students to graduate early, according to Stuart Heiser, a spokesman for the Association of American Medical Colleges.

According to the association’s tally updated Wednesday, 12 schools say they will allow all their students to graduate early and 13 say they’ll give some of the class the option, Heiser said.

The New York Institute of Technology’s College of Osteopathic Medicine in Old Westbury is graduating 80 to 100 of its students — about a third of its graduating class — on April 15, more than a month before the college’s scheduled virtual graduation, so they can begin helping in the fight, said the college’s dean, Dr. Jerry Balentine.

NYIT student Max Cohen, 25, hopes to graduate early and help with the coronavirus fight – perhaps at a hospital in Brooklyn, where he lives — before he begins his pediatric residency at Maria Fareri Children’s Hospital in Westchester.

Hospitals are overwhelmed with patients, and “we have the some of the skills to at least get in and assist with all the doctors, nurses and affiliated staff and make a difference and improve what’s going on in the hospital right now,” he said.

They “have the option of temporarily going to work to help with the pandemic at a Northwell hospital, ahead of their summer residencies,” she said in an email.

Among Stony Brook’s 2020 class, 49 will be going to work at Stony Brook Hospital in the next few days to help fight the virus, according to school spokeswoman Emily Cappiello — a figure that doesn’t include taking assignments elsewhere.

Dr. Kenneth Kaushansky, the dean and a hematologist, said Stony Brook was launching a clinical trial of a wearable device — “a Fitbit on steroids” — with 700 high-risk health care workers at the hospital to understand the earliest stages of the virus.

Standing via the livestream from a lectern in his office and dressed in academic robes, Kaushansky told the class: “Just think about the health care crisis surrounding us at this very moment. What we do here, what we do now, will define us as physicians, as a profession and as a health care system.”

At Wednesday’s ceremony, about 600 viewers watched live. One by one, graduates’ names were recited. Then, for a few seconds each, the screen switched to video of that graduate, many at home and wearing white coats and stethoscopes (for those who wanted to appear on the livestream).

Chris Lutrario, 25, originally from East Meadow, will be doing his residency in pediatrics at NewYork-Presbyterian /Weill Cornell Medical Center in Manhattan. He said the accelerated graduation and his classmates’ deployment were unexpected when medical school started in 2016 but “is a necessity in a time when we are desperate for as much assistance in the medical field as possible.”

Dean Kaushansky said Wednesday's ceremony was the school’s first — and he hopes the last — "we will need to be Zoomers on commencement day.”

Kaushansky welcomed the 122 new physicians to the profession on a day government officials around the world announced that the death toll from coronavirus was continuing to climb.

“While we have not set up any appointments for you yet,” he said, “the day is still young.”