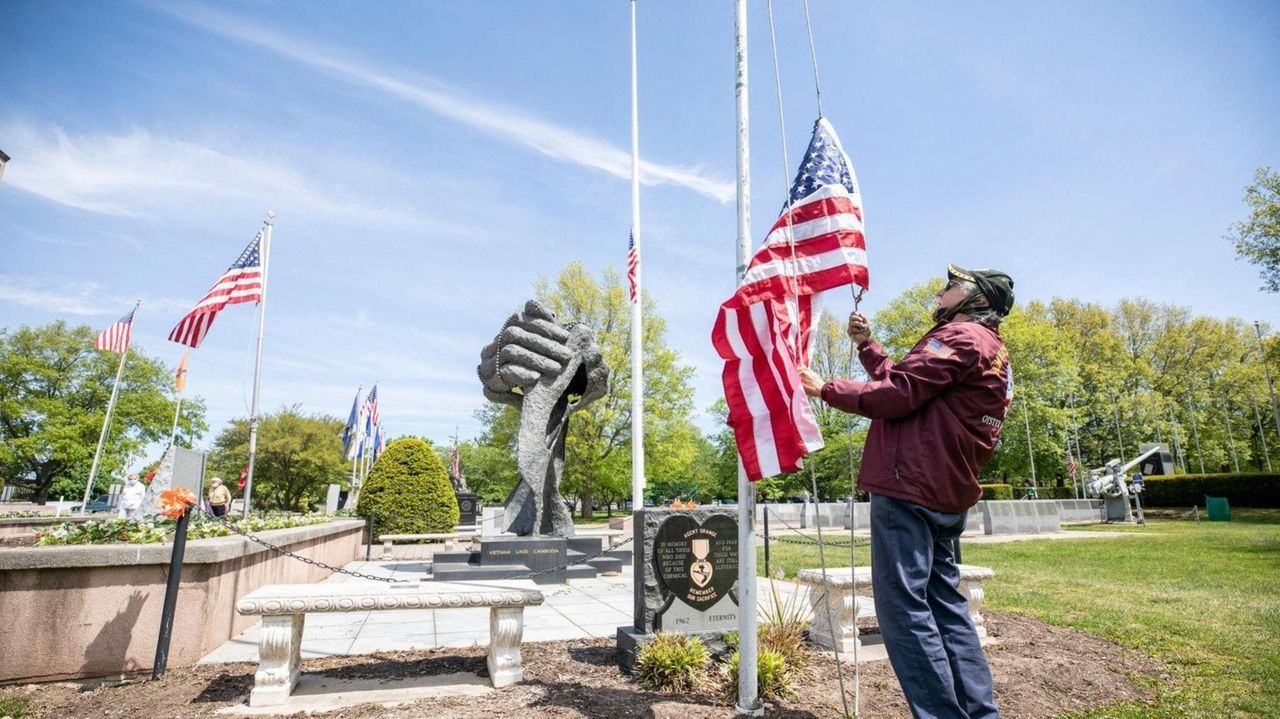 The restrictions on the holiday weekend that marks the unofficial start of summer have touched all areas of life on Long Island. Credit: Newsday / Yeong-ung Yang

This year, a multigenerational crowd of Carol Maldonado’s extended family and friends will not visit her Freeport home to enjoy the backyard pool and celebrate Memorial Day.

The Pistones of Locust Valley, too, are having a quieter than usual observance on the day that they would host dozens of people to watch the floats, bands and marchers wind through the village streets to pay tribute to the country’s war dead.

And Lindenhurst Mayor Mike Lavorata will salute by laying a simple wreath at Village Hall, a somber, socially distant ceremony and stark departure from previous years when the community hosted a parade and Lavorata shared a beer with local veterans who told tales of battle in the nation’s wars.

Big, public rituals that mark Long Islanders’ gratitude for the military personnel who made the ultimate sacrifice — the parades and fanfare like the annual air show at Jones Beach which draws hundreds of thousands of people — have been scaled back to quick, sparse events or canceled altogether to prevent the spread of the coronavirus.

Long Island’s beaches are open but social distancing rules will be enforced there and staple activities like group sports are prohibited. Face masks are encouraged in areas where the recommended 6 feet of distance cannot be maintained. Popular beachfront restaurants won’t serve patrons as they would in years past as Long Island has not yet reached state-mandated benchmarks to lift itself out of lockdown mode.

The restrictions on the holiday weekend that marks the unofficial start of summer have touched all areas of life, from the places where Long Islanders gather en masse on land and water to enjoy entertaining spectacles to the most intimate of spaces — the home.

The pool is almost party ready, Maldonado said, but the crowd will be missing the first dip of the year. She said her parents are stuck in Honduras because flights into the United States are severely limited. And her other relatives in Hempstead and Elmont are staying put to observe social distancing rules.

“This year, I feel like it’s going to be sad,” Maldonado said, adding that she will celebrate with her husband and four children. That’s it. “It’s only us.”

Lindenhurst's Lavorata earlier this month announced "a small, socially distant ceremony in front of Village Hall," after saying the annual parade would not take place.

“On a sad note, this year’s Lindenhurst Memorial Day Parade, sponsored by the United Veterans Council, has been canceled,” he posted on May 15. “Although we will miss the pomp and pageantry of the parade, there are still many ways that our Lindenhurst Community can show our respect and support for the veterans and fallen heroes of our country. I suggest you hang an American flag, or raise one out on your lawn. You can make signs that say a word of thanks for our veterans, and place them in your window or post them on your lawn.”

He said those small but meaningful gestures can still preserve the mission of the holiday.

“Emotionally, it’s been kind of draining,” Lavorata told Newsday, noting that he had to cancel summer camp for kids as well. “Because I know how much people look forward to these things. I love the parades in Lindenhurst. Memorial Day, to be honest, is one of my favorite weekends. I get to honor people . . . I get to spend the day, have a beer at VFW Hall and just listen to these men talk about history and educate us.”

Retailers are also feeling the effect.

Brenden Rutigliano, owner of Captree Fuel, Bait and Tackle in Captree State Park, said sales are down some 80% this year. But, he said, people are going fishing while a smaller number of people are using their boats, which can only hold members of a family or residents of the same address, according to social distancing rules.

“I will say we’re still getting a decent crowd but it’s nothing like it should be this time of year,” he said. “My sales are down 80 percent. It’s ridiculous.”

Rutigliano said his other property, Jones Beach Bait and Tackle, remains closed because beachfront concession stands and restaurants can’t serve food yet, which makes up 60% of the revenue.

'Individually, you can honor them'

Passersby will serve as substitutes for the grand marshal, floats and band strolling down Main Street in Northport, said Amy Connor, who said she will mark the occasion with a small barbecue with her two sons, daughter and husband.

It’s normally a big family event that even draws her parents, who travel by boat from Port Jefferson for the festivities and parade on Main Street. This year, even they won’t be coming.

“That’s not happening,” she said. “It's going to be a very, very different Memorial Day for us. No big parade and no barbecue at the fire department,” where her husband is a volunteer firefighter.

She added that the week marks both her 25th wedding anniversary and her husband’s birthday.

For Memorial Day, “We’ll probably do something in the day, probably barbecue," she said. "It’s going to be very quiet.”

Ditto for the Pistones of Locust Valley, who had up to 40 people wearing red, white and blue leis as they munched on bagels, doughnuts and other treats at their home along the parade route last year, said Frank Pistone.

“One of the things we like about the holiday was being able to celebrate the men and women who sacrificed a lot for us, the ultimate sacrifice,” he said, adding that up to 10 people will be at his home this year. “It’ll be scaled down quite a bit . . . I think, individually, you can remember them, though it’s going to very different as a community to do that together. But, individually, you can honor them and decorate your house and put a flag up or bunting and honor them in that way.”