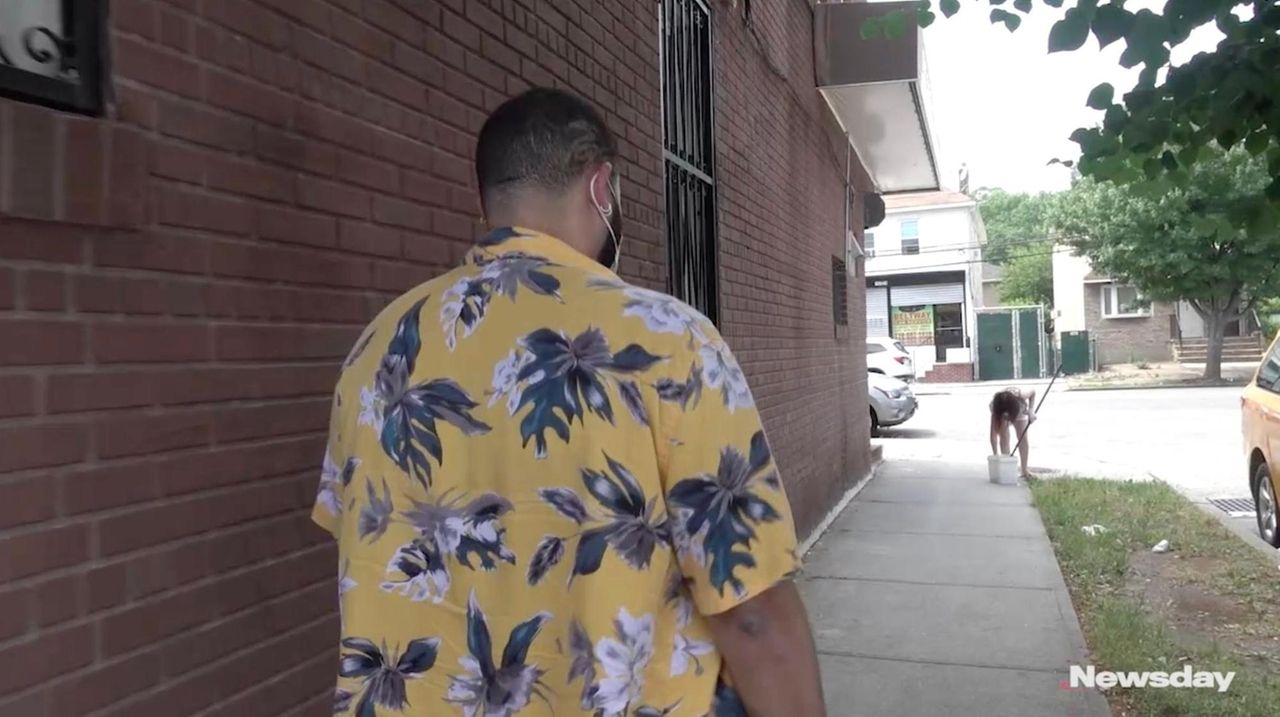 For some Long Islanders who have dreamed of living in New York City, the coronavirus has put a stop to their plans.  Credit: Debbie Egan-Chin; James Carbone

But then the coronavirus pandemic hit the city, and the couple left for her home in Keene, New Hampshire.

“I lost my job in late March due to the pandemic, and all we heard outside our apartment was 24/7 sirens,” said Fay, 23, who grew up in East Moriches. “It felt almost apocalyptic, and even going out for a few necessities was super stressful.”

For Matthew Pacholik, being affectionate in public with his boyfriend sometimes just feels more comfortable in the city than on Long Island.

“I’d rather hold Mark’s hand in Manhattan than in the middle of Patchogue,” said Pacholik, 21, of West Sayville, adding: “I’ve been wanting to move to the city forever.”

Living in the city that never sleeps has been a lifelong dream for generations of young Long Islanders like Pacholik and Fay.

The pandemic has meant hitting snooze.

For the past four months, fewer people have been moving into New York City, real estate industry figures show, a trend that appears to be continuing even as the city warily awakens and a monthslong lockdown eases. It’s all upended a rite of passage and kept young people in the suburbs.

“New York has a huge amount of attractions to young people,” said Mitchell Moss, a New York University professor of urban policy and planning. “It’s a place to explore their identity, to test different career paths, to meet people that they can’t meet in their hometown and to develop professional networks.”

Over the past 15 or 20 years, there’s a been a trend of young people returning to cities such as New York, Atlanta and Los Angeles, reversing the decadeslong suburbanization that began in the 1950s, according to Philip Ethington, co-author of the article “Suburbs in Transition” (2007) and a history professor at the University of Southern California.

“It would not be surprising if, in the last how many months, those former eager re-urbanizers have had second thoughts because the amenities that they were seeking were now vanished,” Ethington said.

Far fewer people have been moving to New York City starting in late March — there were 71% fewer new leases in Manhattan in April compared with last year, 62% fewer in May, 36% fewer in June — and it’s up in the air whether the market will recover anytime soon, said Jonathan Miller, president and chief executive of Miller Samuel Inc., a real estate appraisal and consulting firm.

“Now they’re living with their mom and dad in the suburbs,” he said of young people.

Aleksandra Scepanovic, managing director of Ideal Properties Group, said that even with real estate showings allowed once again, the company’s volume is down to about 75 leases per month from about 100.

“Our phones are ringing a little bit less, and our emails are getting less saturated than in previous years,” she said.

“Typically, there was a protocol: You would graduate high school, go to college, get a job, move to the city — and now those jobs, many of them, many, many, are remote, so you could be anywhere,” said Alison Bernstein, president and founder of a technology platform called the Suburban Jungle Group and its counterpart, the Urban Jungle Group, which work with people moving from urban to suburban living and vice versa. “New York City isn’t the no-brainer it once was.”

Between 2013 and 2017, the most recent period available, an estimated 260,264 people moved to New York City. Of that number, 44,561 came from elsewhere in the state such as Long Island, according to an analysis provided by Joe Marvilli, a spokesman for the city Department of City Planning.

Paul Gentil, owner of Gentil Moving Services in Garden City Park, said that in years past his moving men would sometimes make several stops at different houses on Long Island — to pick up each roommate’s belongings en route to their shared apartment in the city. But since the pandemic, planned moves to the city have been canceled, and calls for help moving out of the city have spiked, he said.

“I can’t quite think of the last call that I had for somebody who wanted to move into the city,” said Gentil, whose own daughter, 24, hoped to move there, but “that’s not going to happen now.”

“Now that they’ve had some time to reflect, wherever they are, they’re also looking at a more affordable market,” Miller said.

Asked Tuesday what he’d say to suburban youth who are reluctant to move to his city, de Blasio cited how the city has corralled the pandemic; he added, “this is gonna be a place where in fact there’s the most prospects going forward.”

“Look at the history of New York City. It’s fought back from literally every major crisis and gotten stronger. Whether you go way, way back to the Great Depression or whether you look at 9/11 or the Great Recession or Hurricane Sandy.”

Pacholik said he still plans to move to Long Island City, Queens, once he graduates from Stony Brook University and the pandemic recedes or there is a vaccine, allowing for the city to fully open.

“I absolutely love the amount of things that I could do. I love the nightlife there. I never really got to experience it as I just turned 21,” said Pacholik, who plans to move with his boyfriend, Mark Missirlian, 27.

In the meantime, Pacholik said, he does not want to move because his parents are immunocompromised and vulnerable to the virus.

Fay still speaks fondly of the city, where he lived just east of Prospect Park, and it is the only place he’s been applying for jobs. He hopes to move back from New Hampshire.

Damon Evans, who moved with his family to Wantagh from the city when he was in eighth grade, decided he couldn’t wait until after the pandemic to fulfill his dream of returning to the boroughs.

“A lot of stuff on Long island closes early,” he said, and it’s hard to get around without a car. And, as a drag performer, “there is barely any queer nightlife on Long Island.”

So he used his $1,200 pandemic stimulus check from the government to put down a security deposit and moved June 10 into an apartment in Queens to share with two roommates: his friend and sister.

“The freedom of not being in my parents’ house is so great,” the 26-year-old said, adding: “I don’t plan to live here forever, but I definitely needed to experience being a free adult in the city.”

1:50
Can you ask someone if they're vaccinated without sounding judgmental?
Encouraging COVID shots can be tricky for employers
Suffolk sees lowest number of COVID-19 positives since pandemic's start
Biden pushes shots for young adults as variant concern grows
LI unemployment rate drops below 5%
1:48
Struggling landlords: Surviving the ban on evictions
Didn’t find what you were looking for?