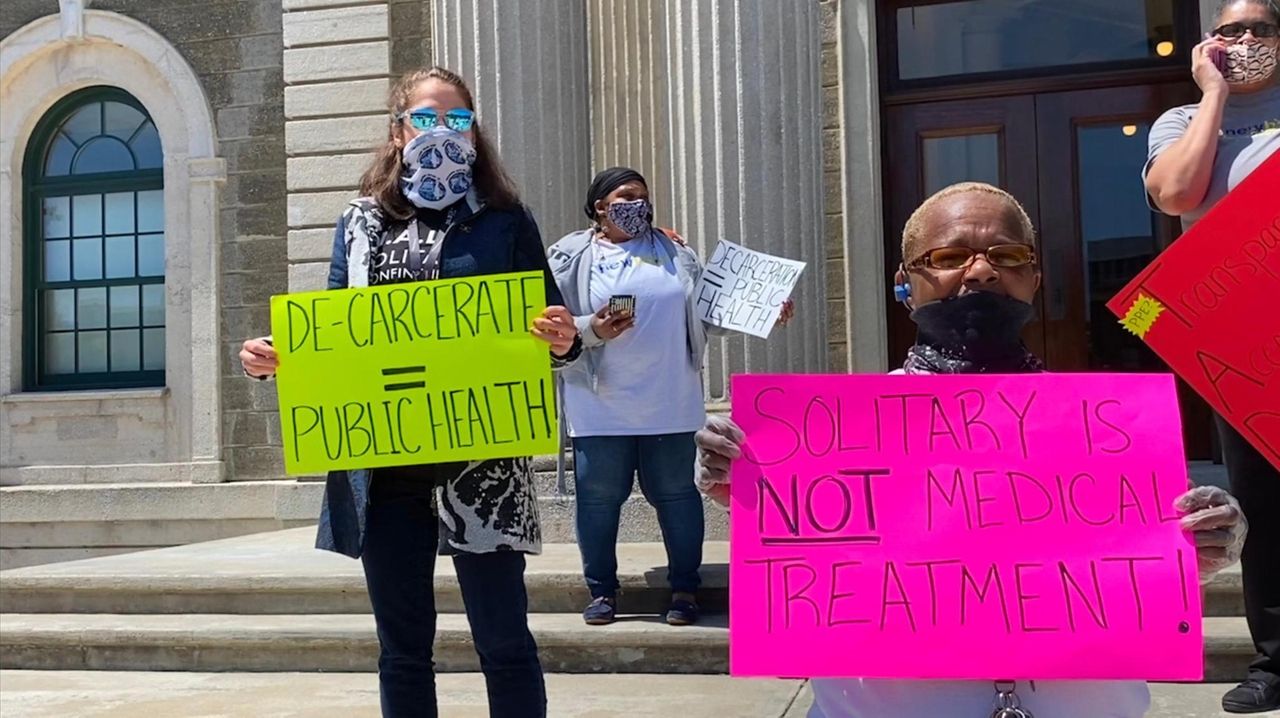 Advocates for inmates at the Nassau County Correctional Center called on County Executive Laura Curran to provide daily updates on the number of coronavirus cases in the East Meadow jail and for the release of vulnerable people during a protest Thursday in Mineola.

Speakers at the demonstration at the Nassau legislature building said the lack of regular updates had caused families to worry about the health and safety of their incarcerated loved ones.

“The people in the jail are terrified and their families are terrified,” said rally organizer Susan Gottehrer, director of the Nassau County New York Civil Liberties Union. “Laura Curran, you ran on transparency and accountability, so let's have it.”

The activists who participated in a news conference outside the legislature — while practicing social distancing — also demanded increased testing for inmates and called on officials to provide masks to incarcerated people before release.

Rally organizers said Nassau Sheriff James Dzurenda, who operates the Nassau correctional facility, had been responsive when they raised their concerns. But the families of the incarcerated, they said, need daily updates on what is going on in the facility.

“We know the overwhelming majority of those incarcerated will return to the community and without including jail health, COVID-19 cannot be adequately reduced in the community,” said another rally organizer, Serena Liguori, the executive director of New Hour for Women and Children, which provides services to incarcerated women.

Dzurenda posted a memo on the correction department  website in late March that outlines the protocols the agency is taking to protect inmates and staff and to prevent the spread of the virus, including issuing masks, aggressive cleaning, segregating new admissions and the construction of an infirmary for inmates infected with COVID-19. He said on Thursday that all new admissions to the jail were tested for the coronavirus.

“I believe we have done a good job,” Dzurenda said. “My biggest goal is to protect inmates  and staff.”

Fifty-seven inmates have tested positive for the coronavirus since the beginning of the pandemic, Dzurenda said Thursday. Forty-seven have recovered, eight have been discharged and two remain incarcerated. The jail’s population, which fluctuates day to day, was 612 on Thursday.

Ninety-seven corrections officers and other staff members have tested positive, Dzurenda said, and most have recovered.

Only one inmate has tested positive for the coronavirus in Suffolk jails, Sheriff Errol Toulon said. Twenty-one corrections officers and four deputies also contracted the virus.

Dzurenda said 8.4% of Nassau inmates and 11.8% of the staff had tested positive for the virus, which Gov. Andrew M. Cuomo said on April 23 had potentially infected 16.7% of people on Long Island, citing an antibody study that found as many as 2.7 million state residents had been afflicted.

“It’s easier for us to quarantine people or to order them to wear face masks,” Dzurenda said.

Rally organizers said that was good news — but without regular updates, the families of inmates would keep fearing the worst.

“Without daily updates, it sounds like lives in the jail do not matter,” Gottehrer said.