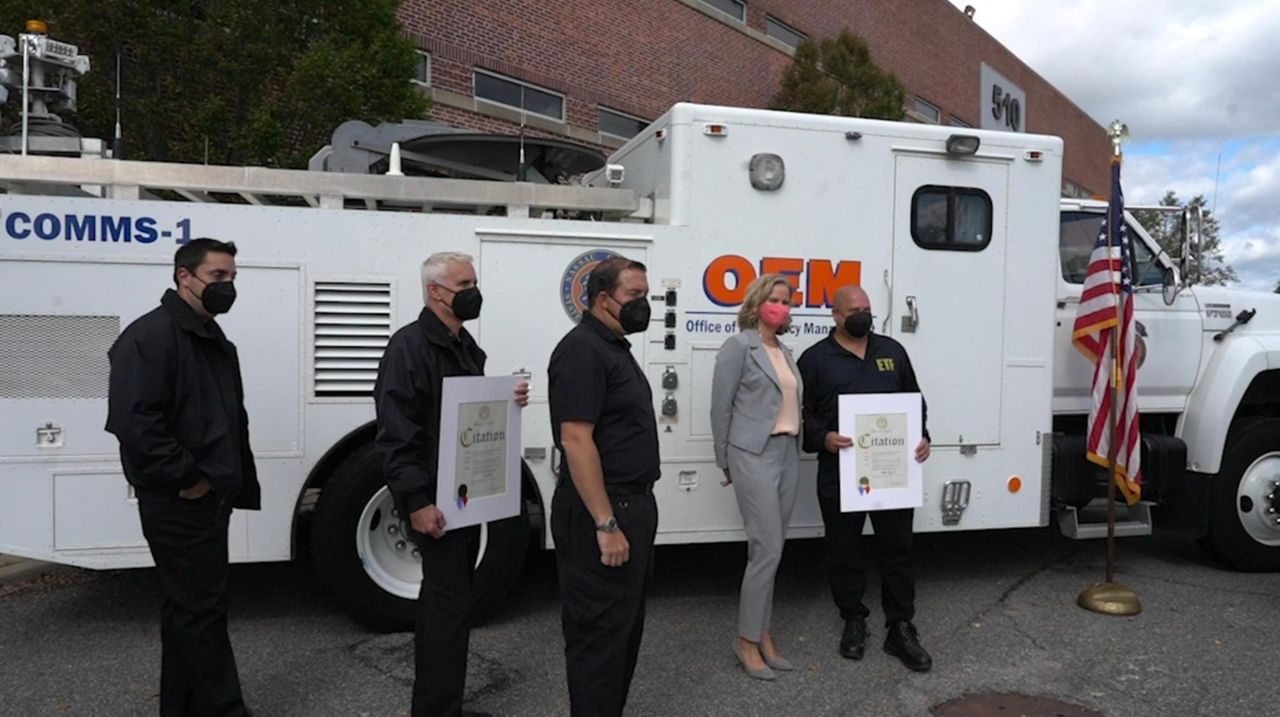 On Wednesday, Nassau County Executive Laura Curran honored the members of the COVID-19 Emergency Task Force, which distributed PPE and pizza to hundreds of thousands of essential workers on the front lines, during the height of the pandemic. Credit: Debbie Egan-Chin

Nassau County Executive Laura Curran summoned a higher power Wednesday to describe the efforts of seven men who distributed personal protective equipment and pizza to front-line workers at the peak of the COVID-19 crisis.

"They call it a mission of faith because they really are doing God’s work," Curran said during a news conference at the county's Emergency Management Office in Bethpage to honor the men. "They commandeered as many trucks and Chevy Suburbans as they could get their hands on, and they got to work distributing PPE and pizza."

The group had volunteered for the COVID-19 Emergency Task Force, which was organized by the Diocese of Brooklyn, and distributed protective equipment, such as face masks and hand sanitizer, as well as pizza pies, to thousands of police officers, firefighters and health care workers on Long Island and New York City at the height of the pandemic, officials said.

"They would come and hand out the equipment, hand out the food individually to these front-line workers," Curran said, "bringing them sustenance and equipment that they needed, but also some human kindness, too, which in those really difficult days, was so important."

In just a few months, Curran said, the volunteers honored Wednesday stopped by police precincts, firehouses and hospitals, distributing more than 500,000 masks, about 100,000 bottles of hand sanitizer, 42,000 pairs of gloves and 50,000 pizzas.

She dubbed them ETF Team Seven, comparing them to SEAL Team 6, the Navy unit that captured and killed Osama bin Laden.

Curran said LeVien, the director of the emergency task force who is also with the Roman Catholic Diocese of Brooklyn, initially met others in the group at Ground Zero following the Sept. 11 terrorist attacks. The group continues to help Long Islanders, delivering meals to food pantries and homeless shelters, Curran said.

LeVien, of Valley Stream, said he had a mission to help people and was humbled by the recognition. Even so, he said, the work of first responders and health care workers should never be overlooked.

"The sacrifice of all the police officers, and firefighters, and all the first responders, the doctors, the nurses — it’s something I’ll never forget."

There is nothing stronger than the heart of a volunteer, said Steven Morelli, Nassau's commissioner of the Office of Emergency Management. That strength, he said, is still needed because the pandemic won’t end in the foreseeable future and many are struggling to feed their families.

"It lifts a tremendous burden for those that count on their services," he said.