Gov. Kathy Hochul said the change in how New York reports deaths was about "being more transparent." She is shown speaking to reporters after a ceremonial swearing-in at the state Capitol on Tuesday. Credit: AP/Hans Pennink

The story was reported by Bart Jones, Yancey Roy, Jean-Paul Salamanca and John Valenti. It was written by Jones and Roy.

ALBANY — Gov. Kathy Hochul has made an immediate break with the Cuomo administration by deciding to release a comprehensive toll of COVID-19 deaths, replacing a policy that had kept New York’s numbers lower than federal reports.

On her first day on the job Tuesday, Hochul acknowledged 12,000 more deaths in the state than reported under her predecessor, Andrew M. Cuomo.

In stark contrast to Cuomo, Hochul provided a daily update on the virus that included not just deaths accounted by health care facilities in the state but also those tallied by the federal Centers for Disease Control and Prevention. The federal tally includes deaths in homes, hospice, prisons and other settings, and includes presumed — not just confirmed — deaths due to the virus.

As a result, the administration said the state tally as of Tuesday totaled 43,415 deaths. The more comprehensive CDC total was 55,395.

"It’s about being more transparent, releasing the data as we get it," Hochul said. "There are presumed and confirmed deaths — people should know both. Also, as of [Tuesday], we’re using CDC numbers, which will be consistent, so there’s no opportunity for us to mask those numbers. Nor would I want to mask those numbers. The public deserves a clear, honest picture as to what’s happening.

"Whether it’s good or bad, they need to know the truth, and that’s how we restore confidence," she added.

Cuomo was criticized for not releasing broader numbers, saying he gave a misleading picture of how well his administration had managed the pandemic.

Cuomo officially resigned Monday under pressure following a report from the State Attorney General's Office concluding he sexually harassed 11 women and a fast-moving legislative process to impeach him.

The gap between the federal and state death totals reported in New York State has been known for some time, though it was not previously acknowledged by the state.

In early August, a Newsday analysis of federal and state data found that more than 2,000 additional people had died on Long Island from COVID-19 than New York State was publicly reporting.

The gap was rooted in New York’s exclusion of some COVID-19 deaths in its publicly released totals, even though the state was aware of those additional deaths and reported them to the CDC.

The state number was lower because it counted COVID-19 deaths only in certain settings, such as hospitals, but not in others, such as homes.

The Newsday analysis found that more than 9,400 people had died on Long Island of COVID-19, according to federal statistics, not the roughly 7,300 that the New York State Health Department publicly reported.

The pandemic death toll continued Tuesday, with 16 New Yorkers dying from the virus, including two each in Nassau and Suffolk counties.

The number of new cases continued a generally upward trend as the delta variant spreads. Nassau reported 297 new cases, while Suffolk had 420, for a total of 717 on Long Island.

The seven-day average for positivity in testing for the virus dipped slightly for the second day in a row on Long Island after surpassing 4% during the last week. The average Tuesday was 3.92%. The statewide average was 3.13%.

Meanwhile, the latest numbers from the New York City Department of Health indicate "very few" fully vaccinated New Yorkers are being infected — and getting "severely sick" — from COVID-19 and the overwhelming number of those ill, hospitalized and dying from the disease now are the unvaccinated or those not fully vaccinated.

The city health department said Wednesday that between Jan. 17 and Aug. 7, 96.1% of COVID-19 cases, 96.9% of COVID-19 hospitalizations and 97.3% of COVID-19 deaths in New York City were "in people who were unvaccinated or not fully vaccinated."

During that same time period, just 0.33% of those fully vaccinated had been diagnosed with COVID — and just 0.02% had been hospitalized, the department said.

The number for those fully vaccinated who died of COVID, or complications from COVID, was 0.003%.

Similar statistics for Nassau and Suffolk were not immediately available Wednesday.

"Our new analysis shows that the vaccines continue to be highly effective against COVID-19 illness, including against the delta variant," NYC Health Commissioner Dr. Dave A. Chokshi said.

And unvaccinated New Yorkers are about 10 times more likely to be hospitalized with COVID than those who are fully vaccinated.

Despite research showing the protection provided by vaccines, about 200 people who said they were health care workers or their supporters gathered outside Stony Brook University Hospital on Wednesday to protest a New York mandate that all hospital workers at state-run facilities get vaccinated by Sept. 27 or risk losing their jobs.

The crowd carried signs reading, "No mandates! No masks! No vaccine!" "My body, my choice," "Heroes don’t need to be mandated," and "Last year’s heroes, this year’s unemployment?"

Christine Manello, 37, of Smithtown, who says she has worked in the hospital for 13 years, said ordering hospital workers to get the vaccine when they don’t want to is not fair considering many of them worked through the COVID-19 pandemic last year and have families to support.

"Everyone is very upset. People want their jobs, they love their jobs and they’re going to fight until they know they have job security," Manello said. 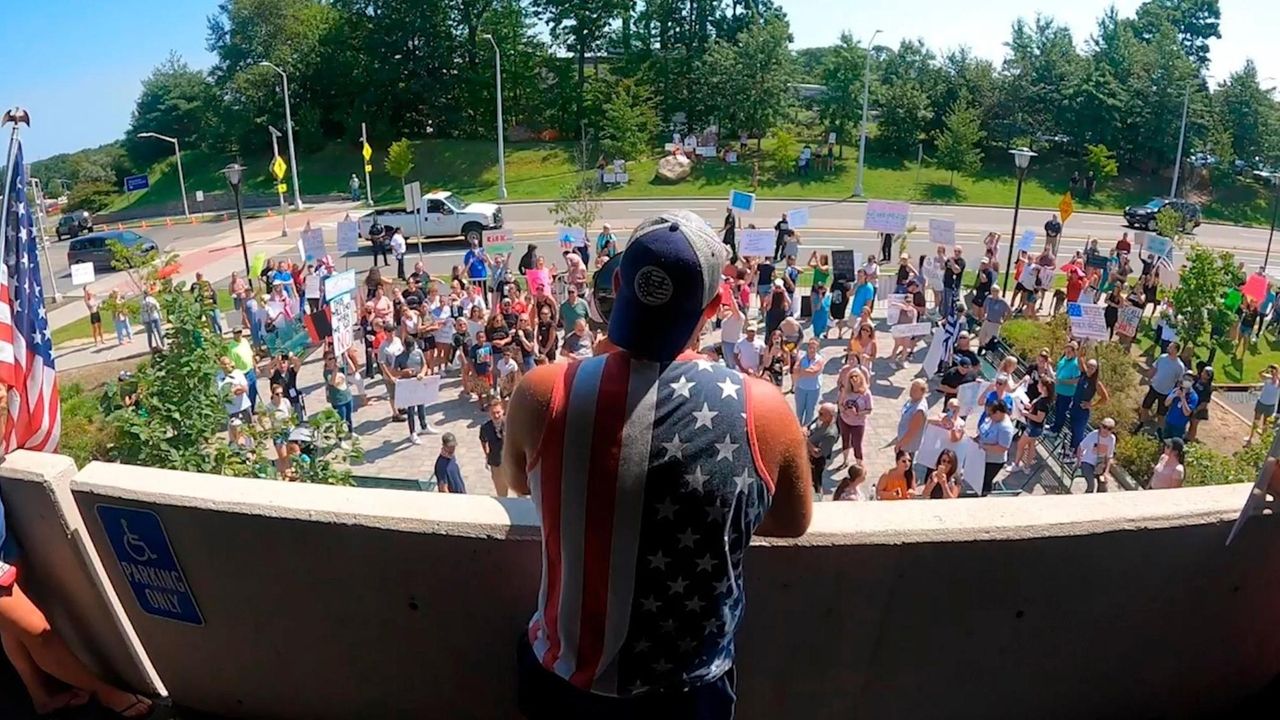 Samantha Loffman, 33, who says she has worked as a nurse in the hospital for more than a year, said she was "devastated" when she found out that taking the vaccine was now a condition of employment at the hospital.

Although she acknowledged the vaccines have worked for others, Loffman feels there are too many unknowns and she doesn't want to take the shot until she sees more evidence that it's safe, she said.

"I know the vaccine works for a lot of people, but I have worked every COVID shift that’s come and I have not gotten sick," Loffman said. " … I believe in vaccinations, and that they have a protective quality to a majority of people, but as of right now, I can’t say I feel comfortable with this vaccine in that regard."

When asked whether patients would be safer if more hospital staff get the vaccine, Loffman said, "I believe in freedom and that patients have the right to say ‘I don’t feel comfortable having an unvaccinated worker work with me,’ and I would be more than happy to accommodate them."

When asked about her plans should she lose her job next month, Loffman said, "I have many plans. I have Plans A, B, C, D and E, and I’ll have to find another job."

Beverly Perrone, who says she is a nurse educator and registered nurse at Stony Brook Medicine, said the protesters wanted to send a message to workers who didn’t want to take the vaccine that they were not alone.

"This is my home, this is my family," Perrone said. "People are making choices based on fear, so we want to give them support and encourage them to show them that they are not alone, that we stand with them as a family."

The statement continued: "COVID-19 vaccines have proven highly effective at preventing serious illness, hospitalization and death from COVID-19. They are important tools to keep patients, patient-facing health care workers, and the wider community safe as we observe a rise in COVID cases in New York State, driven by the Delta variant."

In contrast to the protest, State Sen. Brad Hoylman (D-Manhattan) on Tuesday introduced legislation that would mandate schoolchildren receive the COVID-19 vaccine the same way they must get shots for measles, chickenpox and other diseases. "It’s a no-brainer to add COVID-19 to that list," he said.

The mandate would go into effect 30 days after the FDA issues full approval for the vaccine. Hospitalizations of children with COVID-19 are at record highs in the country, Hoylman noted.

The FDA gave full approval to the Pfizer COVID-19 vaccine for those 16 and older on Monday.