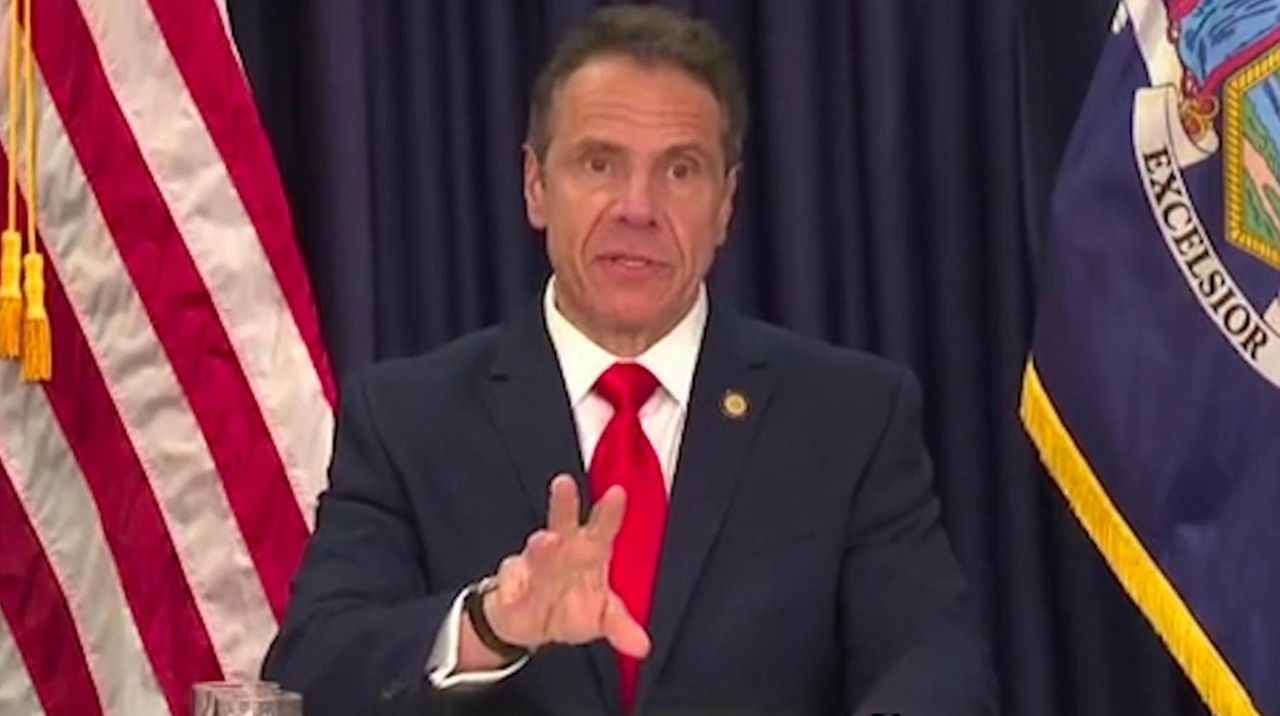 This story was reported by Jim Baumbach, Michael Gormley, Mark Harrington, Paul LaRocco and David M. Schwartz. It was written by Schwartz.

The state disclosed 1,050 Long Island nursing home residents have died from COVID-19, nearly 70% more than previously reported, as the state faces scrutiny over how it has protected vulnerable residents during the coronavirus pandemic.

Statewide, at least 4,813 people have died from COVID-19 in the state's nursing homes since March 1, 1,700 more than previously reported, according to the latest figures.

The tally by the state Department of Health for the first time includes people believed to have been killed by the coronavirus before their diagnoses could be confirmed by a lab test and represents a dramatic increase in reported deaths at elder care facilities.

However, exactly how many nursing home residents have died remains uncertain because the list doesn’t include residents transferred to hospitals before dying. Long Island has 79 nursing homes, with a total of roughly 15,000 occupied beds on average, according to a Newsday analysis.

The new numbers confirm what advocates, family members and even nursing home operators have said — that the state’s original list severely underestimated the damage that COVID-19 had wreaked at many nursing homes.

Advocates say nursing homes have struggled to secure personal protective equipment, get enough tests for residents and have enough workers at facilities that were already short-staffed. Additionally, nursing home operators complain that a New York State Department of Health order from March 25 required them to accept COVID-19 patients being discharged from hospitals and an April 1 law granted nursing homes some immunity from civil and criminal liability.

"They’re in a petri dish filled with this virus," said Susan Smith, whose father Louis Gair, 90, died April 20 after contracting COVID-19 at the Long Island State Veterans Home in Stony Brook. The facility, run by Stony Brook University for veterans and their dependents, had the most deaths of a nursing facility on Long Island.

The state list reported 53 deaths at the Veterans Home, including 48 confirmed and 5 presumed positive cases, although the facility reported to families on Tuesday night that there were 65 deaths among residents, including those who died at the hospital. That was an increase from 59 reported Friday.

Gov. Andrew M. Cuomo on Tuesday said nursing homes were doing a “phenomenal job” in difficult circumstances and defended the state’s response to the crisis at nursing homes, including orders in March barring visitors and providing PPE to nursing homes.

State officials said the March 25 directive was prompted by a fear that nursing homes might discriminate against virus patients the way HIV patients were discriminated against in the 1980s during the early days of the AIDS crisis. The intent of the guidance was to remind nursing homes of their fiduciary, legal and moral obligation to accept these patients, but also to note that under law they could transfer them if the nursing home lacked the space, staff or equipment to treat them.

The officials said the immunity from lawsuits clause in the state budget deal protects all health care workers, not just those in nursing homes, and was prompted by the desire to protect health care workers from out of state who were recruited to work in New York, and the hospital at which they worked, from being sued because they did not have a New York state license.

Advocates said the state needs to release more information about the extent of the outbreak inside a facility and offer more assistance to nursing homes.

The latest list could encourage facilities to send patients to hospitals when they shouldn’t, according to Richard Mollot, executive director of the Long Term Care Community Coalition, a non-profit advocacy group said

“What kind of impetus does this give to nursing homes to send people off to the hospital?” Mollot said. “We always unfortunately see a lot of game playing in the nursing home industry, especially in New York, and this just exacerbates their ability to hide numbers.”

Mollot said the most useful information the state could release would be the number of cases currently being treated inside a facility.

A joint letter by AARP New York, SEIU 1199, NAACP and other organization on Tuesday called for Gov.  Cuomo to marshall resources and policies for nursing homes and other long-term care facilities, similar to how the state helped hospital systems prepare for a surge in patients back in March and early April.

The numbers released Tuesday are “extremely upsetting. These are some of the frailest people in our society,” said Bill Ferris, AARP New York lobbyist. “The governor needs to act in the same coordinated, focused manner as he did for the hospital system.”

Cuomo and his administration on Tuesday said they’ve been focused on protecting nursing homes since early March.

As he has at previous news conferences, Cuomo emphasized that nursing homes that couldn’t safely care for virus patients from hospitals shouldn’t have accepted them. “We have alternatives,” he said.

Cuomo also added: “I would take all of those numbers with a grain of salt. What does ‘presumed death’ mean? … I think they are going to change over time.”

Nursing home operators didn’t contest the new numbers, but said a shortage of tests still hampers an accurate appraisal of how many residents died of the virus, rather than the many underlying ailments of the elderly residents.

“Testing is still not widely available,” said Michael Balboni, executive director of the Greater New York Health Care Facilities Association. “Second-guessing is the sport of the day, but it doesn’t necessarily contribute to factual information as to the numbers or for epidemiological study,” Balboni said. “I think in some ways, it’s pursuing a unicorn. No one is going to be truly satisfied with the authenticity of the final numbers.”

“It is not a reflection of the care being provided in facilities, it is a function of the fact that you can’t practice social distancing in a nursing home,” Hanse said. “I can’t stand 6 feet away from a resident and provide care.”

After weeks of friction, he said he was glad Cuomo on Tuesday said nursing home workers are doing “phenomenal” work.

“People ask me who is to blame, what’s to blame,” Hanse said. “I am reminded of the saying that blame is a lazy person’s way of making sense out of chaos. I think that is really accurate here as we’re dealing with the highly contagious, invisible virus that knows no boundaries and truly preys on the most vulnerable in our community.”

Still, distraught family members and residents at facilities questioned why some facilities have been hit so hard.

Smith, whose father died at the Long Island State Veterans Home in Stony Brook, said it took days for her father to be tested after developing symptoms. She also said the facility should have isolated infected patients sooner.

Stony Brook University operates the facility. Dr. Ken Kaushansky, senior vice president of health sciences and dean of the Renaissance School of Medicine, said in a statement that the veterans home has “taken swift action since the beginning of this crisis to cohort infected patients. At the same time, we have been transparent about how the coronavirus is impacting our residents and employees.”

In a statement, officials at the veterans home said it was seeing a “small number of infections, but the rate has decreased significantly.”

In Nassau County, Fulton Commons Care Center in East Meadow had the most deaths, at 39. Previously, it had reported fewer than five deaths, which the state Department of Health had not been releasing because of concerns about privacy. The latest list includes those facilities.

Parker Jewish Institute on the Nassau-Queens border in New Hyde Park and Isabella Geriatric Center in Manhattan — one of New York City’s largest nursing homes with 705 beds — have reported the highest number of deaths: 71 and 64, respectively.

Audrey Waters, a spokeswoman for Isabella Geriatric Center, said in an email last week, "Isabella, like all other nursing homes in New York City, initially had limited access to widespread and consistent in-house testing to quickly diagnose our residents and staff. This hampered our ability to identify those who were infected and asymptomatic, despite our efforts to swiftly separate anyone who presented symptoms.”

Parker Jewish Institute did not respond to a request for comment.

With the Associated Press

Cuomo: More than 10 million NYers have received at least one COVID-19 vaccine dose
More restaurant seating opening up as state moves to lift restrictions
Shots may not work fully for transplant patients, others with immune issues
Biden boosting world vaccine sharing commitment by 20M doses
Cuomo's book deal during pandemic was worth $5.12M
LI landlords call for more COVID-19 grants for eateries
Didn’t find what you were looking for?