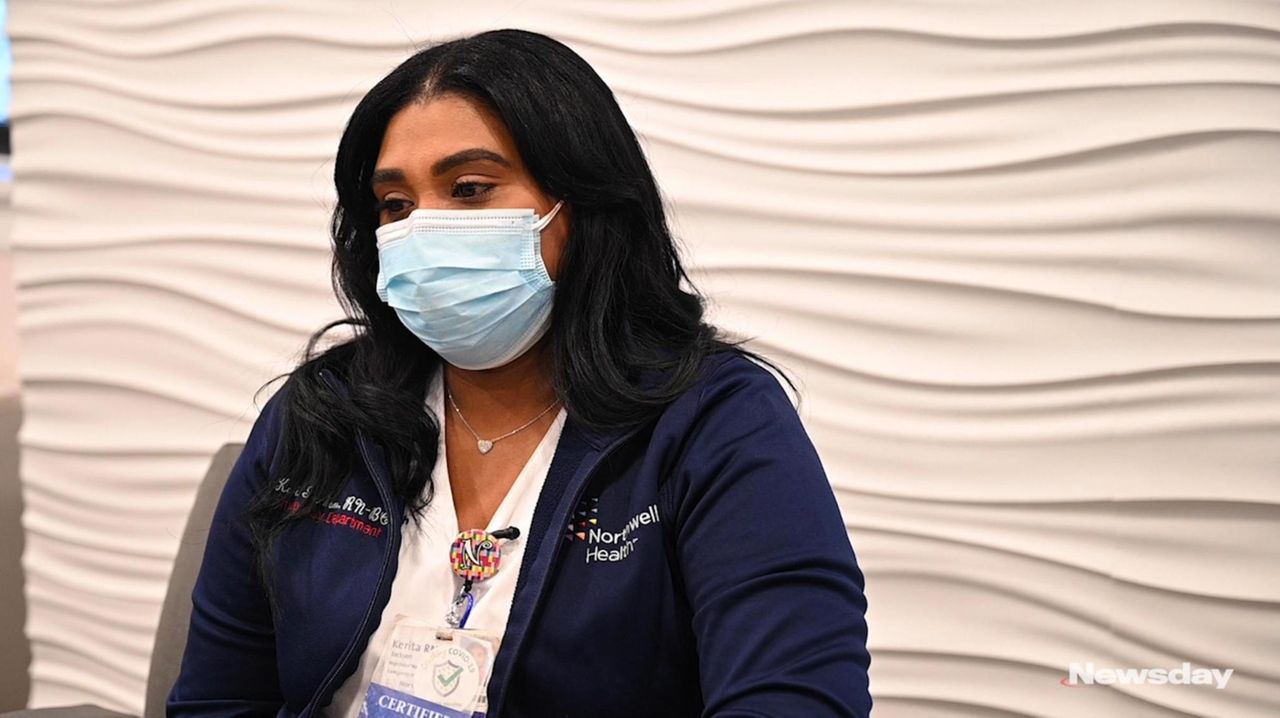 When New York was hit hard by the COVID-19 pandemic in March 2020, front-line workers witnessed things they had never seen. Newsday spoke with two Long Island nurses about their experiences and how they dealt with the pandemic. Credit: Newsday / Alejandra Villa Loarca

Emergency room nurse Kerita Jackson has been looking for ways to help ease the stress and sadness she has struggled with since the COVID-19 pandemic turned her community hospital into a war zone last year.

Gardening helps a little. So do hugs from her toddler son.

But like many nurses, Jackson, of Centereach, has been unable to shake the scenes of death and feelings of helplessness she experienced during the peak of the pandemic last spring working at Long Island Jewish Valley Stream hospital.

"We were doing everything we could, but the patients were not getting better," said Jackson, 39, who has been a nurse for more than 12 years. "I would sit in my car in the driveway and I would just cry for maybe an hour. I couldn’t talk to my fiance … Nobody is really going to understand until they saw what you saw."

Experts say it is too soon to determine the pandemic’s long-term impact on the physical and mental health of nurses. Many have sought out therapy, medicine and the support of peers to help them cope. Others, however, have been reluctant to seek assistance.

"A lot of us have superwomen complexes … it’s a big problem with nurses," said Judy Sheridan-Gonzalez, president of the New York State Nurses Association, which represents about 40,000 nurses. "We think we can help everyone, but we can’t help ourselves."

Even the more experienced nurses were shocked by the number of people who died from COVID-19 during those first grueling months dating to last March. With family members barred from hospitals, nurses stepped in to help lonely, sometimes fatally ill patients make phone calls and set up video chats.

Several hospitals have Team Lavender programs that include a range of professionals from social workers to chaplains and even holistic medicine experts focused on helping staffers manage the pressure and anxiety.

Sheridan-Gonzalez, who is a veteran emergency room nurse at Montefiore Medical Center in the Bronx, said the COVID-19 crisis pushed many nurses out of the field.

Some older nurses retired early because they feared they were especially susceptible to the virus, she said. Others were disheartened by the lack of protective equipment and support from the federal government during the first surge of the pandemic, as well as staffing shortages.

Even as lower numbers of new COVID-19 cases clear the way to reopen the economy in New York, nurses are still fearful another wave is looming if not enough people get vaccinated and continue to take precautions.

"They are emotionally tired," said Elizabeth Conklin, nurse manager in the Emergency Department at NYU Langone Hospital-Long Island. "And we’re not done … we can’t let our guard down. We are still seeing patients come in."

Jackson is a former flight attendant who went into nursing after watching her mother battle a severe illness.

She and other nurses worked hard to tend to the flood of patients that showed up at LIJ Valley Stream. Between mid-March and early April, 360 critically ill COVID-19 patients were transferred to other hospitals in the Northwell Health system. LIJ Valley Stream is licensed to have 284 beds.

Hospitals across Long Island and the nation didn’t have space and equipment to help people who were critically ill.

"You have to figure out who do I give my last ventilator to, who do I give my last oxygen tank to," said Jackson, who grew up in Trinidad. "This is America … I never thought I would see such a bad situation where we didn’t have the basic necessities to give to the patients walking through our doors."

She found little solace at home. In order to keep her family safe, Jackson stayed in a separate part of the house. She could hear her toddler son cry for her but couldn’t hold him for fear of making the child or others sick.

Talking to her colleagues helped, but a tough bout with insomnia prompted her to speak with a therapist.

Prayers, tears in the medicine room

Growing up in Uniondale, there was little question Valerie Moskowitz would go into nursing.

"My mom was a nurse," said Moskowitz, 52, a Valley Stream resident who works in the intensive care unit at Plainview Hospital. "Very special people in my life were nurses."

When the first wave of COVID-19 patients started coming into the hospital, it reminded her of the HIV/AIDS crisis she experienced at the start of her career in New York City 30 years ago.

"No matter what our efforts, people were not getting better," she said of the COVID-19 surge. "Patients were now on eight to 10 medications … they were also getting blood."

"The food was there … it seemed too time-consuming," she said. "We didn’t want to leave our patients … the medicines were running at high speeds."

Sometimes nurses gathered in the medicine room to pray, talk and cry.

One day in the hospital, Moskowitz collapsed. She thought she was just exhausted, but she had contracted COVID-19.

She sent her teenage daughter to stay with her older daughter out of state while she recovered at home alone. Colleagues were her lifeline, constantly checking on her and dropping off food.

The experience made her eternally grateful and determined to take better care of herself. After recovering, Moskowitz had surgery to help her lose weight. As a result, her high blood pressure and diabetes are under control, she said.

"A lot of us have experienced and are experiencing post-traumatic stress because it was a rough time," she said. "We have to continue to rely on each other."

With patients isolated from loved ones, nurses took on another important role during the pandemic: surrogate family members.

"We were their emotional support as well as their caregiver," said Conklin, who has been a nurse for 39 years and lives in Merrick. "It took a big toll on the nurses. You had to take care of them and then hold their hand as they died."

Danielle Curry, nurse manager of the Hospital Observation Unit at Stony Brook Medicine, said she believes there will be "significant mental health concerns" for nurses after COVID-19 because of what they’ve been exposed to and what they’ve seen, especially for the younger nurses who started right before the pandemic.

"We have had to really support them, help them and give them resources," she said. "Some are actively getting therapy, anti-anxiety and depression medication just to try to be able to work and function."

The veteran nurse said despite her experience, she also was overwhelmed.

"There were many nights I would go home crying," Curry said. "I could not believe what I saw that day."

1:56
Cuomo: Vans to take COVID-19 shots to farmworkers
Data: New variants now more than 70% of NYC COVID-19 cases
State updates guidance for COVID-19 sick leave law
1:14
They're celebrating a 2nd pandemic birthday, but it's brighter than the first
Study: Blood thinners helping COVID-19 patients after they're released
Cuomo: Outdoor graduations of more than 500 people OK with restrictions
Didn’t find what you were looking for?