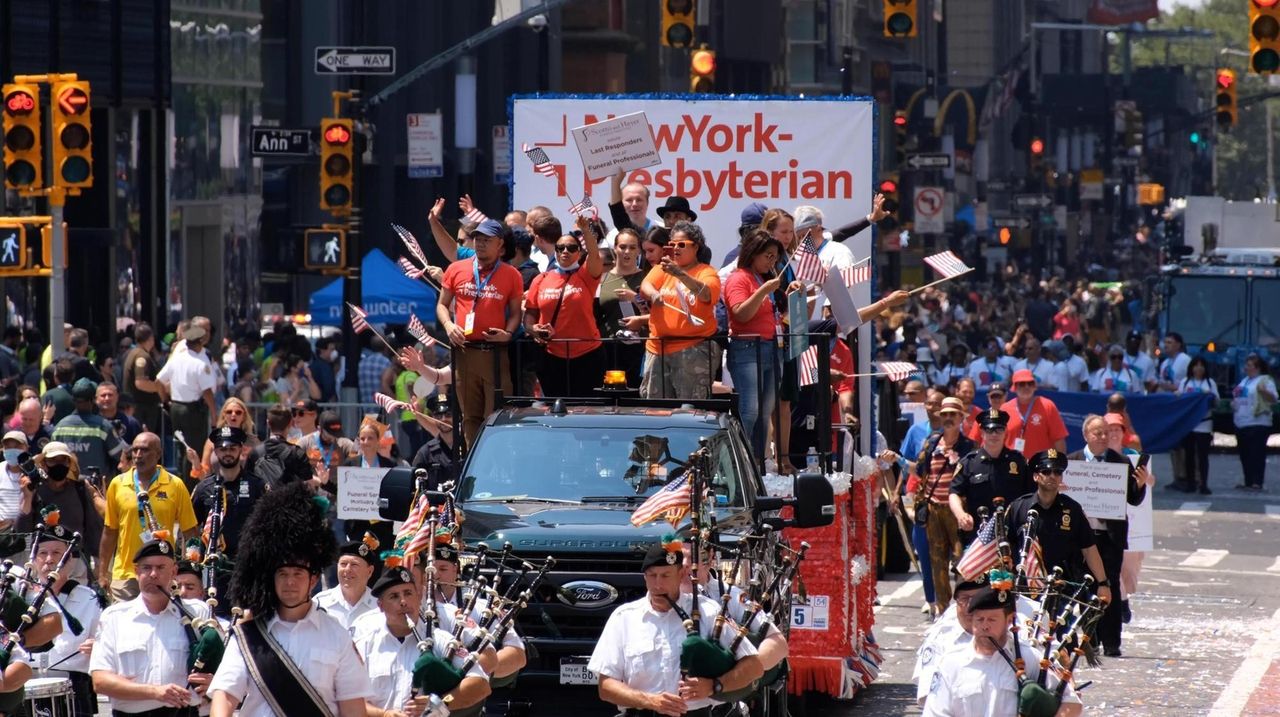 War heroes and their commanders returning from battle have been showered with ticker tape along New York City’s Canyon of Heroes since the 19th century. So have kings and queens and princes and prime ministers and presidents and Olympians.

On Wednesday, the ticker tape was for the often anonymous workers who helped get the region through the coronavirus pandemic: the nurses, the doctors, the testers and tracers, the orderlies, the bodega cashiers, the transit operators and conductors, the cops, the firefighters, the jail guards, the food deliverers, the sanitation workers, and other front-line workers.

"After this crazy year that we had," said North Shore University Hospital surgical intensive care nurse Samantha Paez of Huntington, "I’m so grateful that we’re all alive, we’re healthy, and we get to celebrate. Health care workers, teachers, union workers, police officers, firefighters — everybody had a hand to get to where we’re at now."

It was during one of the pandemic’s worst months — April 2020, when so many were dying that refrigerated morgue trucks were parked outside hospitals — that Mayor Bill de Blasio promised the city would emerge from the darkness by celebrating, at some point in the future, with a ticker tape Hometown Heroes Parade.

That day came Wednesday, with the rates of infection, hospitalization and death comparatively low and precipitously dropping for months.

The parade grand marshal was Sandra Lindsay of Port Washington, a nurse and the first person in the United States to receive an approved COVID-19 vaccine. She waved to the thousands of spectators who gathered for the event, which started at 11 a.m. at Battery Park, and winded uptown on Broadway to City Hall.

"It just means everything to us," she said, seated on the back of a vintage 1952 convertible.

Over a loudspeaker from a stage near City Hall, de Blasio recognized each category of worker finishing the route.

"Thank you, hero!" he said at one point, to no one in particular.

Juanita Guyton, a nurse at the Nassau University Medical Center in East Meadow’s emergency department, also worked through the pandemic and noted the devastating toll — more than 42,000 in New York State alone.

The parade came after a year of unspeakable pain and loss for New York City and the region, where lockdown restrictions to stop the virus' spread meant those who died in hospitals and nursing homes could not say goodbye to loved ones in person.

"It was devastating. We saw a lot of lives lost, but we also saved a lot of lives there, but we stuck together, and we worked as a team in the emergency room, and we made it," she said. Basking in cheers, Guyton said "it feels good to know that it didn't go unnoticed, all of our work, all of the hours that we were up, didn’t go unnoticed and that people are appreciative of what we did."

As for the pandemic, she said, "Oh, gosh, it’s like a 360 — totally different. COVID is still around, but it’s not doing what it was doing then."

Emperatriz Zanetti, of Baldwin, a Bridge and Tunnel Authority sergeant, noted how the region became eerie at the height of the pandemic, particularly at the Whitestone and Throgs Neck bridges she patrols.

"It was weird. It was dead and there was nobody around. It was not the same as when you have the hustle and bustle, and then all of a sudden it was kind of quiet. And then I watched it slowly come back," said Zanetti as a confetti cannon shot ticker tape over her head and crowds cheered.

The sidelines had honorees, too.

"Like, a year and a half ago, we wouldn't have expected to be able to have something like this," she said.

The parade ended after three hours.

See latest news on the coronavirus, vaccinesStay up to date with the latest on the pandemic.

State's rate of positive COVID-19 tests ticks up
What to know about the COVID-19 delta variant
Pfizer to seek OK for 3rd vaccine dose; shots still protect
State shutting Brentwood mass vaccination site
Global COVID-19 deaths hit 4 million amid rush to vaccinate
Is Thursday the new Monday? Flexible working is in flux
Didn’t find what you were looking for?