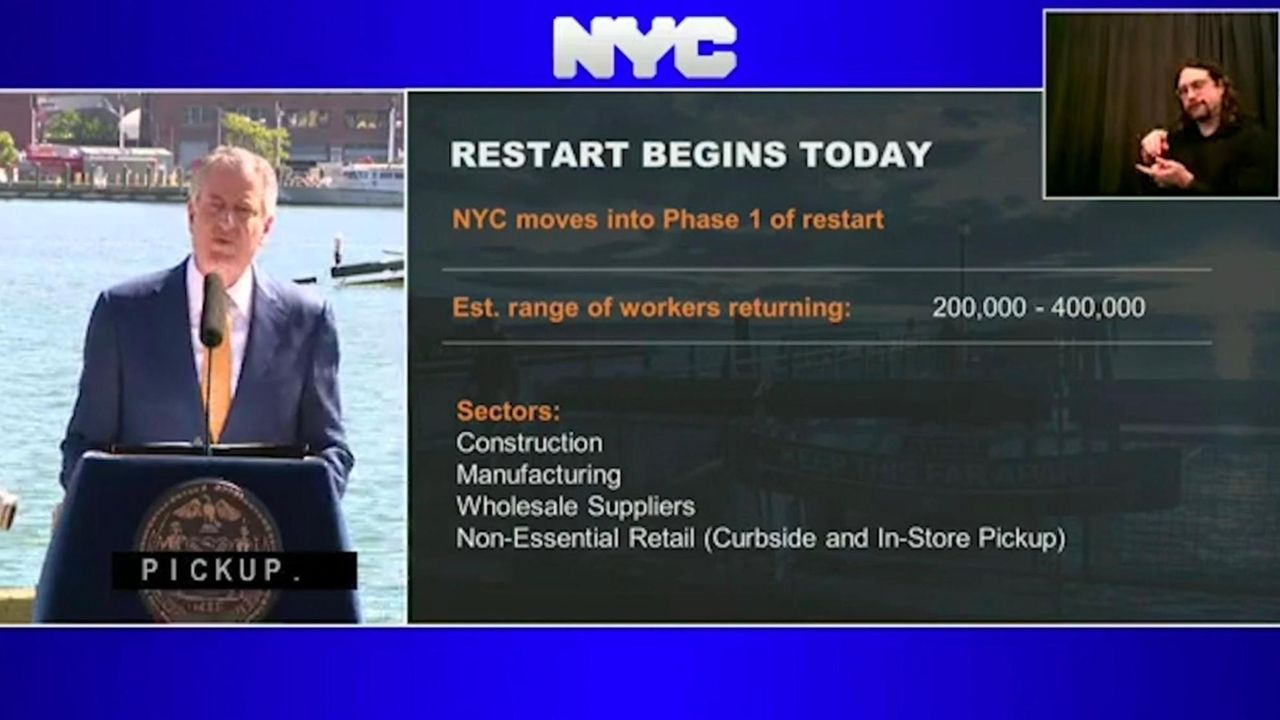 NYC enters Phase 1 of reopening on Monday and Mayor Bill de Blasio said the biggest keys to success will be New Yorkers continuing to follow social distancing protocols and the test and trace program in place in the city. Credit: NY Mayor's Office

Gov. Andrew M. Cuomo rode the No. 7 train from Queens to Manhattan and pronounced the subways safe for commuters, as New York City took its first steps Monday toward reopening its battered economy — three months after the nation’s most important business hub was abruptly shut down at the start of the coronavirus pandemic.

Mayor Bill de Blasio said it was “literally a beautiful day” as an estimated 200,000 to 400,000 workers — many from Long Island — returned to construction sites, factories, wholesale outlets, retail stores and other New York City businesses Monday.

New York City is the last region in the state to enter Phase 1 and ease restrictions imposed as a result of the coronavirus, which has infected 206,000 city residents and killed nearly 22,000 since early March.

“New Yorkers did what many experts told me was impossible in 100 days. I don’t think I have had a good night’s sleep in 100 days, knowing some of the things they told me,” Cuomo said Monday at his daily briefing. “New Yorkers bent the curve by being smart. We are celebrating. We are back. We are reopening. We are excited. Our mojo is back. Our energy is back.”

Workers will be required to follow social-distancing protocols, officials said, and nonessential retailers that have been closed for months can now offer curbside or in-store pick up. The stores that reopened Monday include Macy’s flagship store in Herald Square, the site of looting just a week ago following massive but largely peaceful demonstrations protesting the death of George Floyd while in police custody in Minneapolis last month.

Cuomo, de Blasio and other officials urged city residents to continue to wear face coverings in public and take other steps to continue to beat back the virus, which surged in Florida, California and other states after restrictions were eased.

Mass transit will be key in getting workers to their jobs and reviving the city’s economy, de Blasio said as he announced the creation of 20 new miles of busways and bus lanes he said will make service faster and more frequent.

“These 20 new miles of busways and bus lanes are going to help over three-quarters of a million New Yorkers to get around more easily — 750,000 New Yorkers will have a faster way to work, more frequent service, less crowding,” said de Blasio, who also said that the Staten Island Ferry will also increase rush hour service, beginning Monday.

The city will also place 800 school safety agents in subway stations to hand out free masks and advise New Yorkers how to use the subway safely.

Cuomo, who grew up in Queens during the rough-and-tumble 1970s, declared the subway system was the cleanest it has been in his lifetime.

“If it wasn’t safe, I wouldn’t ask anyone to go on the subway,” Cuomo said.

Cuomo said there is still a concern that days of massive protests could lead to a surge in virus cases. He said the state will test 35,000 people a day in the city to get a daily snapshot of the infection rate. City tracers will contact anyone who has been in contact with an infected person to encourage them to get tested as well.

“We will watch it on a daily basis to find out exactly what is happening,” he said.

Cuomo urged anybody who participated in the Floyd demonstrations to get tested for free at one of the 15 sites designated for protesters. But there is no evidence that the protests have lead to a spike in infections, New York City Department of Health commissioner Oxiris Barbot said Monday, at least not yet.

Barbot said the fact that the protests have been held outdoors has helped slow the spread but she urged protesters to wear face coverings and frequently use hand sanitizer.

“We are still in what I would say is a moderate transmission phase, meaning that there are on a daily basis still hundreds of people that are newly diagnosed with COVID-19,” Barbot said.

De Blasio said the city reached an important milestone this weekend: Just 3% of New York residents tested Saturday for COVID-19 were positive, the lowest percentage since the pandemic began 100 days ago. The threshold the mayor set for positive tests before the city could reopen was 15%.

The mayor called the drop in positive tests “a great, great sign.”

New York City is also well below other thresholds set by the mayor’s office. There were 67 people hospitalized with COVID-19 on Saturday, far less than the 200 threshold. There were also 326 patients receiving treatment in city intensive care units, de Blasio said, almost 50 less than the 375 threshold.

“It's a beautiful day out, but it's also a beautiful day for this city,” de Blasio said. “This is a powerful day — day 100 of the coronavirus crisis and it is the day that we start to liberate ourselves from this disease, the day we move forward.”