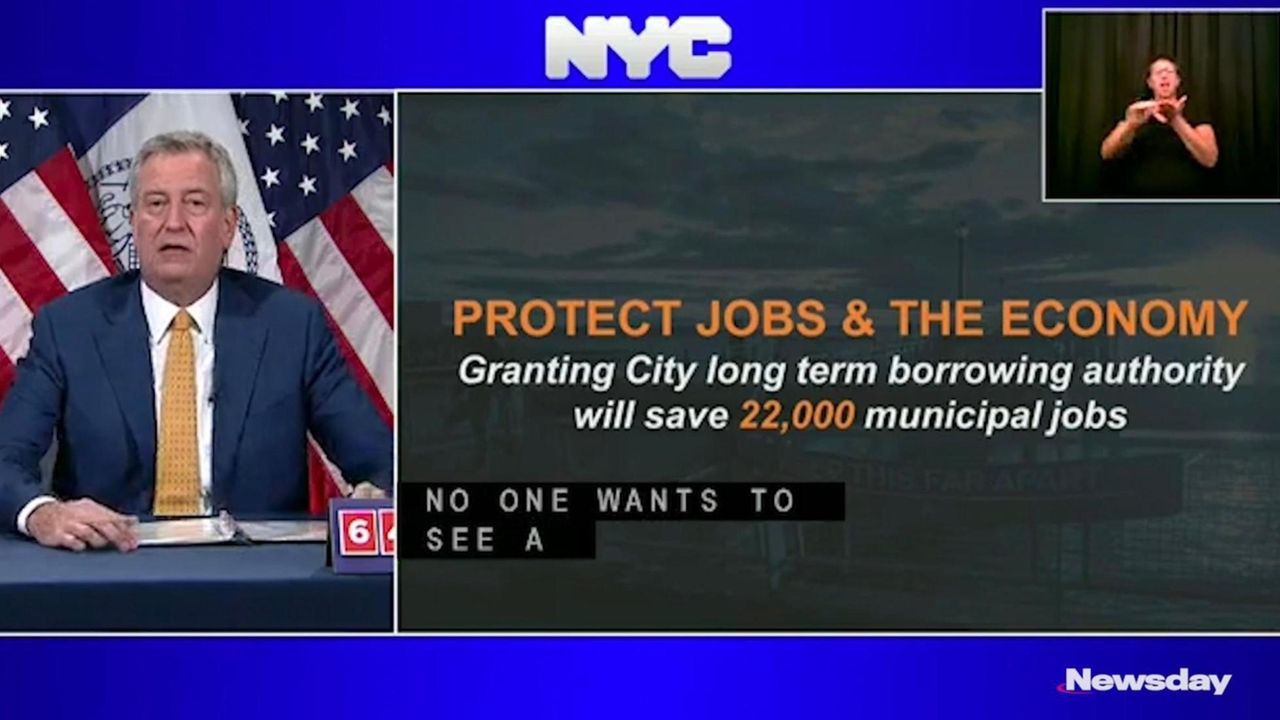 New York City Mayor Bill de Blasio announced on Monday a delay in layoff notices being sent out to the more than 20,000 municipal employees in NYC. Credit: NY Mayor's Office

The New York City teachers union said delegates could hold a strike authorization vote Tuesday if Mayor Bill de Blasio and the Department of Education fail to take additional steps to protect staff and students from the coronavirus when schools open Sept. 10.

In a unanimous vote Monday night, the United Federation of Teachers executive board approved a resolution instructing its leadership to keep negotiating with city officials.

A meeting of delegates from each of the city’s 1,700 schools is set for Tuesday and the union is asking for a plan "that meets the safety criteria set forth by independent medical experts," union officials said in a statement.

If negotiations fail, the delegates could take a strike authorization vote, the statement said.

“We can’t afford to send students and staff back into any buildings until we have done everything possible — including a rigorous virus testing program — to see that they are safe.  The members of the UFT know that public employee strikes are illegal, but we are determined to do what is necessary to protect our students and the families of New York City.”

Earlier Monday during a virtual talk hosted by the Association for a Better New York, a civic group made up of business, labor and nonprofit leaders, Mulgrew said: "Nobody wants a strike. Nobody."

His comments came hours after de Blasio said Mulgrew and other teachers union officials told him they would not hold a strike authorization vote — despite reports that the union was already laying the groundwork for a work stoppage due to pandemic safety concerns.

At his daily press briefing, in which he also announced that layoff notices to city workers won't be sent this week, de Blasio said the city is not preparing a backup plan for schools if teachers strike.

“The UFT has spoken to this over the weekend, and they made clear a strike vote is not planned,” de Blasio said. “I’ve spoken to Michael Mulgrew and it is clear to me that is not on the agenda.”

Mulgrew said Monday that because the city waited too long to shut down schools when the coronavirus pandemic exploded in March, teachers are skeptical of promises that there will be adequate ventilation and equipment in each school building. COVID-19 has claimed the lives of 73 active teachers in the city. The pandemic has killed more than 25,000 in New York State.

“We were told there were safety procedures in place that weren’t being followed and when people were bringing in evidence of positive tests they weren’t being recognized,” Mulgrew said. “So there is no trust.”

De Blasio has faced fierce pressure from teachers, principals and parents to delay in-person education to give the city’s Department of Education more time to prepare buildings for classes during the pandemic.

The union announced in mid-August that it might strike over virus fears even though the state’s Taylor Law forbids teachers and other public employees from using work stoppages to gain leverage in contract disputes.

The biggest hurdle to a safe opening, Mulgrew said, is testing. The teacher's union has called for mandatory COVID-19 testing for all school staff, as well as the city’s 1.1 million students.

“You have to have a mandated testing policy,” Mulgrew said. "The city was absolutely reluctant, and is still reluctant, to do that.”

De Blasio said Monday that mandatory testing is not necessary.

“It's something that we've looked at, but believe for a variety of reasons, it is not the best way to get to where we need to go,” the mayor said.

Union inspectors have visited about 1,400 schools in recent weeks and many of the buildings lack adequate ventilation, Mulgrew said.

“We have not checked all the buildings for ventilation," he said. "Those we that we have checked, there are definitely problems.”

“These things can be overcome if we have a willingness to really partner and work together with both the Department of Ed and City Hall," he said. "We are hoping to get there."

New data reassuring for COVID-19 vaccination in pregnancy
1:22
Doctors worried about hesitancy after 'pause' is lifted on vaccine
U.S. jobless claims fall to 547,000, another pandemic low
Looking for a job? Here are some tips from career experts
Bill mandates COVID safety rules; workers would oversee compliance
J&J vaccine 'pause' latest messaging challenge for officials
Didn’t find what you were looking for?