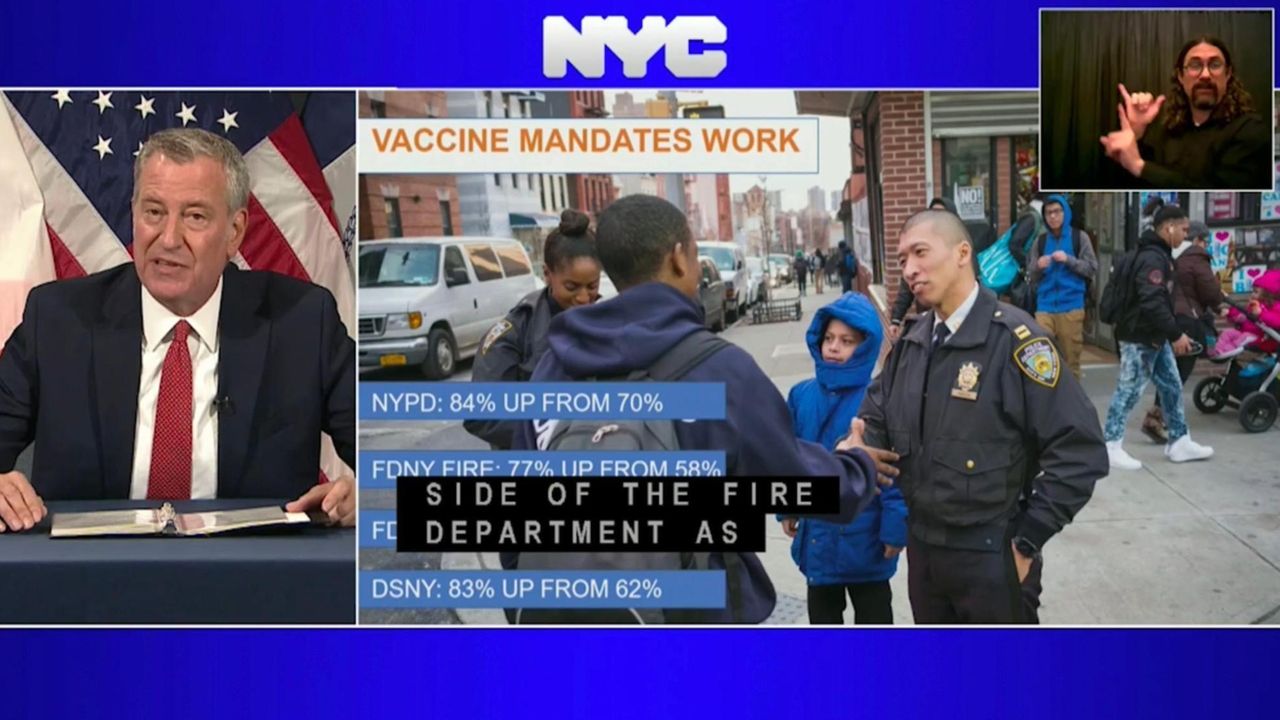 New York City placed approximately 9,000 workers who have refused to comply with Mayor Bill de Blasio's COVID-19 vaccine mandate on unpaid leave on Monday, as officials said there have been no delays in first-responder response times or problems with services due to staffing shortages.

The number of workers placed on unpaid leave represents less than 6% of New York’s 378,000 employees, de Blasio said Monday during his daily briefing. More than 91% of city employees have complied with the mandate, and de Blasio urged those who remain unvaccinated to get the shots.

"Every one of those 9,000 are welcome to come back and get vaccinated," de Blasio said during his daily press briefing.

Another 12,000 city employees filed for exemptions for medical and religious reasons and will remain on the job with weekly testing as their claims are reviewed and resolved in the coming days, de Blasio said.

The leaders of FDNY, NYPD and Sanitation unions had warned that New York would face labor shortages and dire consequences, including shuttered firehouses, delayed response times and mountains of trash if the city enforces the mandate and places unvaccinated employees on unpaid leave.

New York City agencies developed contingency plans before Friday’s vaccination deadline to address staffing shortages, de Blasio and other officials said, and there have been no reports of delays to 911 calls or other service disruptions.

About 2,300 FDNY members have called out sick and most of those are inappropriately using sick days to protest the mayor’s mandate, FDNY Commissioner Daniel A. Nigro said. Firefighters who abuse sick leave could be subject to discipline, he said.

Eighteen of the FDNY’s 350 companies were temporarily out of service Monday because of staffing problems, Nigro said, but no firehouses have been closed.

"Once the members come to their senses and stop using medical leave improperly, they can help out not just the citizens of the city but their brothers and sisters staffing the units."

Seventy-five percent of firefighters and 87% of FDNY EMTs and medics had complied with the mandate as of Monday morning, according to the department. Eighty-five percent of NYPD members had also received at least one vaccine dose by that time.

NYPD Commissioner Dermot Shea said 74 members, including 34 police officers, have been placed on unpaid leave for failing to comply with the mandate, while 6,500 have applied for exemptions.

Eighty-three percent of Sanitation Department employees have gotten vaccinated, Commissioner Edward Grayson said Monday. Garbage piled up in some neighborhoods last week due to a work slowdown by sanitation workers protesting de Blasio’s mandate, but Grayson said crews worked on Sunday to make up for the delay.

FDNY firefighters and other city employees who participated in protests against the mandate last week said the decision to get vaccinated should be made by individuals and not forced upon workers by the city. Leaders of FDNY unions said their members were not given enough time to decide if they wanted to comply with the mandate, issued by de Blasio on Oct. 20, request an exemption or retire.

The Uniformed Fire Officers Association, the FDNY Firefighters Association and the International Association of Firefighters set up a resource center for members placed on unpaid leave at the Stewart Hotel in Manhattan. About a dozen firefighters showed up at the center Monday to get help with paperwork, access resources and peer counseling to help them make decisions about vaccinations or retirement.

"It is a stressful time for our members to make decisions about health and (work) status," said James McCarthy, president of the UFOA.

De Blasio and Nigro said police officers, firefighters and other first responders were among the first eligible to get vaccinated since December 2020.

"For more than 10 months, every member of this department has had every opportunity to get vaccinated as they should have been," Nigro said.

The mayor said vaccinations and the mandate are important tools as New York City — once the epicenter of the global coronavirus pandemic — battles the virus that has killed more than 57,000 in New York State since the spring of 2020.

"We remember those sirens in the night," de Blasio said. "We remember what that pain was. We can never go back to that and that is why these mandates matter. We gotta finish the mission of ending the COVID era."

The seven-day average for positivity in testing for the virus rose slightly, to 2.13% in test results from Sunday compared to 2.11% the previous day. The level has hovered just above 2% for days, though over the last several weeks has slowly declined from 4% during the summer.

The number of new confirmed cases in test results from Sunday was 141 in Nassau and 218 in Suffolk, for a total of 359. New York City logged 728 new cases.

Across the state, 33 people died on Sunday of causes linked to COVID-19, including one in Nassau and three in Suffolk.

Meanwhile, officials at the Levittown school district reported that 42 students were on quarantine at Jonas E. Salk Middle School, which enrolls about 930 students. Another 50 students were on remote instruction as a precaution, but can return to school before Friday if they provide a negative COVID-19 test.

NYC workers' vaccination rate rises as mandate takes effectSome 91% of city workers had received the COVID-19 vaccine as of Sunday evening, according to the city. Nearly 23,000 employees hadn't, but FDNY and NYPD officials said their departments are prepared to cope with any labor shortages on Monday. See latest news on the coronavirus, vaccinesStay up to date with the latest on the pandemic.