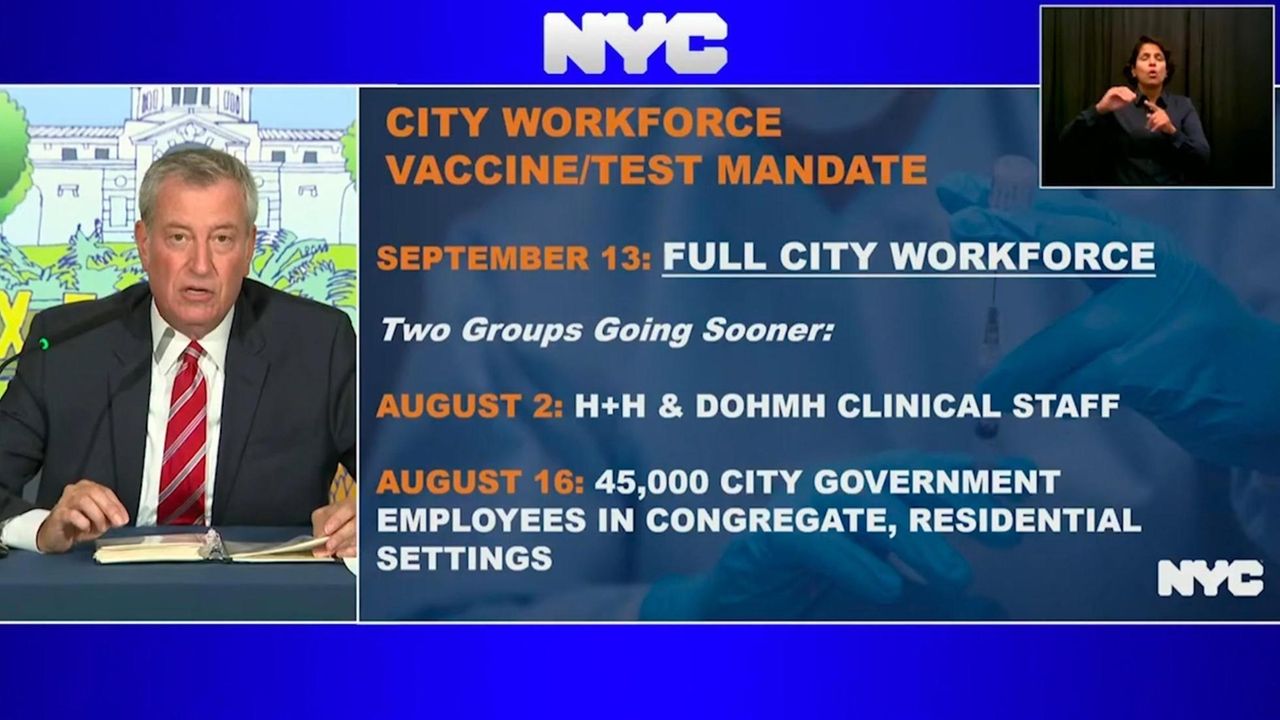 It was the mayor's latest such mandate, impacting more than 300,000 workers, as the number of new COVID-19 cases and positivity levels are rising amid the spread of the delta variant. At the same time, 41% of the city's total population remains unvaccinated against the virus.

Last week, de Blasio announced that front-line city hospital and health care workers must be vaccinated or undergo weekly testing starting Aug. 2. In making that announcement, he foreshadowed that the mandate would expand by "going up the ladder" to additional categories of workers.

Those who work in congregant settings such as senior centers must abide by the mandate starting Aug. 16, he said.

Henry Garrido, executive director of District Council 37, the city's largest labor union of municipal workers, with 150,000 active personnel, suggested in a statement that de Blasio's mandate must be negotiated with organized labor.

In a statement sent by spokeswoman Freddi Goldstein, Garrido said: "If City Hall intends to test our members weekly, they must first meet us at the table to bargain. While we encourage everyone to get vaccinated and support measures to ensure our members’ health and well-being, weekly testing is clearly subject to mandatory bargaining. New York City is a union town and that cannot be ignored."

NYPD officials said the details of the actual implementation of the vaccine mandate in the department were unclear Monday, but hopefully would emerge over the coming days.

Asked last week about first responders such as police officers declining the vaccine on the basis of having previously contracted COVID-19, de Blasio said: "This is in the category of give me a bleeping break. When did everyone get a medical degree? Yeah, I'm sick of everyone armchair saying that they know more than the doctors. … So, could we stop the amateurishness, you know, like this has just got to end. It's got to end."

De Blasio indicated that the mandates are not over and plans to issue still more directives to bring the virus under control.

"We’re going to keep climbing this ladder," he said, repeating the phrase he used last week.

Also on Monday, California announced that it will require state employees and health care workers to be vaccinated or tested weekly.

The new rule would apply to an estimated 246,000 state employees, according to Gov. Gavin Newsom, and at least 2 million health care workers and long-term care workers in the public and private sectors.

Mainstream medical experts say getting people vaccinated is key to stopping the spread of the virus.

New York City workers who are not vaccinated must also wear a mask while indoors, de Blasio said. Workers who fail to follow the mandates will be removed from the workplace and will not be paid, he has said.

He also called on private businesses to follow the same directives, though there is no present mandate for the private sector. The new municipal requirement is critical to the city reversing the growth in new cases, de Blasio said.

He added that September "is the pivot point of the recovery," since schools come back into session and some employers are bringing their workers back into their offices.

With Anthony M. DeStefano and AP

State targeting 21 LI ZIP codes with low COVID vaccination ratesThe state will spend $15 million to fund community-based organizations to pursue on-the-ground vaccine outreach in 117 ZIP codes across New York — including parts of Wyandanch, Calverton and Elmont, among other areas on Long Island. COVID-19 cases on LI, in NY continue to edge upLong Island had the second-highest seven-day average of positive COVID-19 tests in the New York State at 2.23% on Saturday, according to figures released by the state. COVID-19 vaccination rates by ZIP code on LI