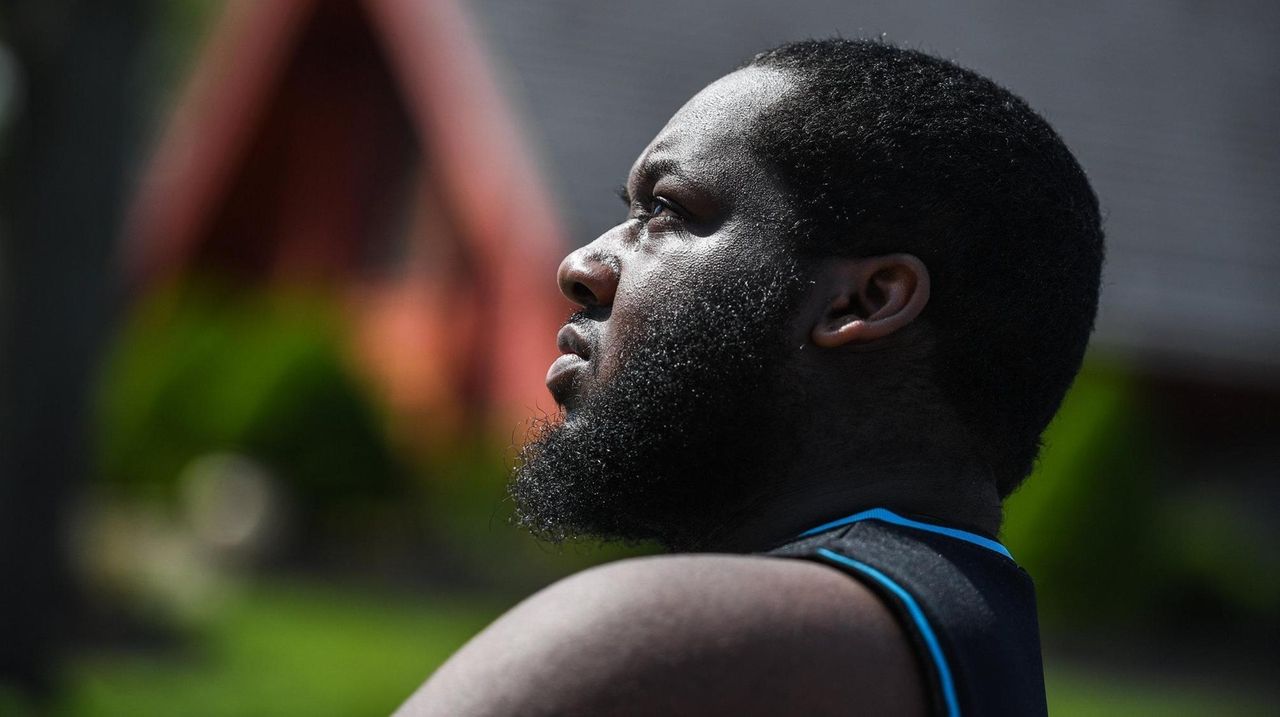 Kalief Metellus, SUNY Old Westbury student government president, says he, along with several students, are now unsure of where they will live this summer. Credit: Newsday / Steve Pfost

Kalief Metellus started online summer courses this week at SUNY College at Old Westbury with a major problem: He doesn't have a place to live.

The college junior and president of the Student Government Association had planned to live on campus for the summer — until a residence hall director emailed him May 14 to let him know he had one day to move out and empty his dorm room.

“Due to the extraordinary circumstance caused by COVID-19, we regret to inform all current residents that summer 2020 housing WILL NOT be offered. Please make arrangements to vacate your current assigned space by tomorrow,” the email read.

Metellus, 24, was among the few students who stayed on campus after colleges across the state shuttered most on-campus services and moved classes online in March, a measure Gov. Andrew M. Cuomo enacted as the number of coronavirus cases spiked. As the fight to keep the virus from resurging continues, colleges are still conducting summer courses online.

Students with extenuating circumstances, like Metellus, who didn’t have anywhere else to live, were permitted to stay on campus. Metellus said he becomes homeless if he can't stay on campus.

College spokesman Michael Kinane said only two students requested summer housing, which was a primary reason the school decided not to offer the housing option.

“We focused our attention on finding them someplace else that could be appropriate because one or two people in an 850-bed complex probably isn’t appropriate,” Kinane said. “It’s not necessarily the best for their own well-being.”

The deadline to move out was extended to Wednesday, but since he still couldn’t find an alternative place to stay, the school gave him an extension to Sunday at 4 p.m. On Friday, the school rescinded that deadline, saying Metellus could stay on campus until an alternative is decided.

“It hasn’t been as easy as we had hoped, but we’re doing our best to find a place that’s appropriate for him," Kinane said. "If there isn’t an alternative, he’ll stay with us for a few more days while we keep working on it together. We’re not trying to send anybody out into the cold."

Metellus went through hardship before ending up at the Long Island campus in 2018, he said. “As I graduated high school, I got kicked out of my mother’s house,” he said, adding that his family disapproved of him being gay.

He moved first to Covenant House New York, a shelter for young people, and then to The Chelsea Foyer, a housing program by Good Shepherd Services, which assists young adults in their late teens and early twenties who are homeless.

Metellus applied to college and was accepted to SUNY College at Old Westbury, where he’s majoring in politics, economics and law. He said he aspires to go to law school and one day become an elected leader. For the summer, he’s taking four courses, including one on legal theory and another on international organization.

“But how can I be expected to function well and succeed with these classes if I don’t have a place to live?” Metellus said. "It’s been hard already juggling four classes with figuring out where to live."

On May 8, he received notice that residence halls would close a week later on May 15 by 10 p.m. and “all residents who are not approved for summer are expected to check out.”

Metellus said he was approved for summer housing, and his financial aid package would cover the cost.

The notice also stated “summer housing and meals are not guaranteed” and that “the college reserves the right not to provide summer housing based on the ongoing needs of the college.” It further stated that students who wanted summer housing needed to meet certain expectations, including financial approval, summer class registration and ability to follow social distancing.

Metellus said he thought that since he met the criteria, he would be allowed to continue to live there.

The second student who had applied to live on campus found an alternative housing accommodation, Metellus said.

“For the school to say there’s no way they can accommodate me as a student, as a student government president, as a person who represents the college and student body — I feel like that sets a tone they don't care about the well-being of students who come from certain situations," Metellus said.

On Wednesday, school officials sent a notice to Metellus of his other options, which included staying at a nearby Holiday Inn for $50 a night or at a third-party housing provider, which has availability in Brooklyn, midtown or uptown Manhattan and also would come at a cost. Metellus said he can't afford those options.

The school officials also said that they've asked five other colleges and universities if they could house him, but the colleges are restricting housing to their own students. Meanwhile, Farmingdale State College and Stony Brook University have offered summer housing to their students.