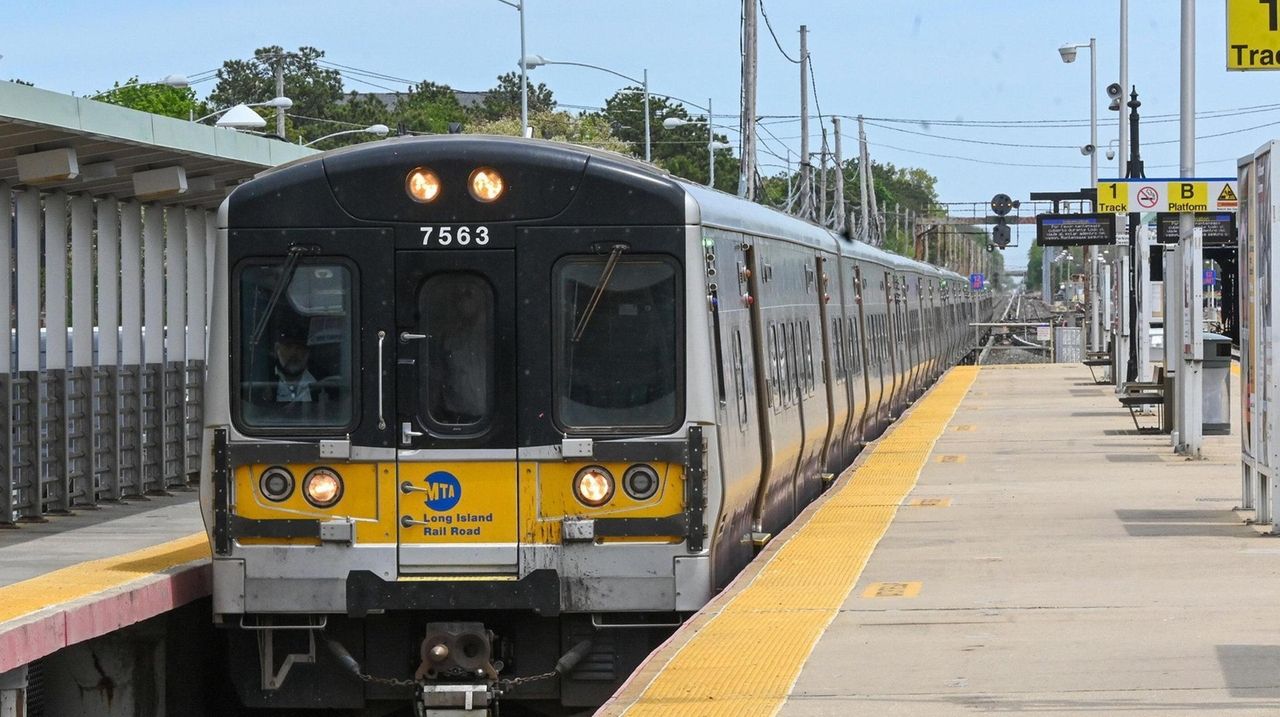 LIRR president Phillip Eng and MTA chairman Patrick Foye on Wednesday announced that, with LIRR ridership down by about 97% throughout April, the railroad posted its highest monthly on-time performance in history.  Credit: MTA

Long Island Rail Road trains ran on-time more often in April than in any month in more than 40 years, although there were few riders onboard to appreciate the improvement.

The LIRR’s on-time performance for April was 98.3% — the highest of any month since the railroad adopted the metric in 1979 — according to figures released last week. The previous record was in January 2010, of 96.8%.

The LIRR considers a train on time if it arrives at its final destination within 5 minutes and 59 seconds of its scheduled time.

Far from bragging about the achievement, LIRR officials suggested the statistics should not be given too much weight, considering how much they were skewed by the COVID-19 pandemic. With New York’s stay-at-home order in place, the LIRR carried just 3% of its usual riders throughout the month — neutralizing what is typically the most common cause of delays for the railroad: crowding.

Railroad officials also pointed out that they have been operating about 30% fewer trains since the Metropolitan Transportation Authority — the LIRR’s parent agency — enacted its “Essential Service Plan” in late March. And so while a higher percentage of trains were punctual than usual, the railroad ran fewer trains than in other months.

“We reported the number . . . because we report it every month, pandemic or not,” MTA chairman and CEO Patrick Foye told reporters at the authority’s monthly board meeting Wednesday. “Obviously, the month for March, April and May are not representative of a normal operating environment, but we report it anyway, because if we didn’t you all would properly be asking, ‘Why aren’t you reporting it during the pandemic?’ ”

Despite the unusual circumstances, LIRR president Phillip Eng suggested there were lessons to be learned about how the railroad performed when it wasn’t bursting at the seams. The railroad has set modern ridership records in four of the last five years. Last year, it carried 91.1 million riders — the most in 70 years.

“In doing that, we were always running trains in a fashion that pushed our infrastructure to the limits,” said Eng, who emphasized the need for capacity expansion projects, like the ongoing effort to construct a third track between Floral Park and Hicksville.

Mark Epstein, chairman of the LIRR Commuter Council — the railroad’s state-regulated rider advocacy group — said another important lesson from the improved reliability figures during the coronavirus outbreak is the importance of modernizing the railroad’s fleet.

With the railroad only operating about 70% of its usual weekday schedule, it has not been operating its oldest fleet of trains — the 1980s-era M3 electric trains, which are less reliable than the rest of the electric fleet. The railroad plans to eventually replace its oldest trains with M9 cars, which began arriving late last year.

“So doesn’t that help the performance, if you don’t have to use the older trains that are going to break down?” Epstein said.

“If you look back and take a look at the things that we’ve been focused on, it has made a difference,” said Eng, who noted that enhanced maintenance efforts have drastically reduced delays caused by track circuit failures and broken rails. “It’s a testament to the men and women being able to do the amount of work they’re doing both before the pandemic and during the pandemic.”

Eng said the railroad also has taken advantage of the reduced ridership, and extra capacity, during the region’s shutdown to accelerate maintenance work, including the replacement of four miles of rail and concrete rail ties and a major switch near Jamaica. Workers also have taken on track work on the Port Washington branch that otherwise would have required a major service outage over the summer.