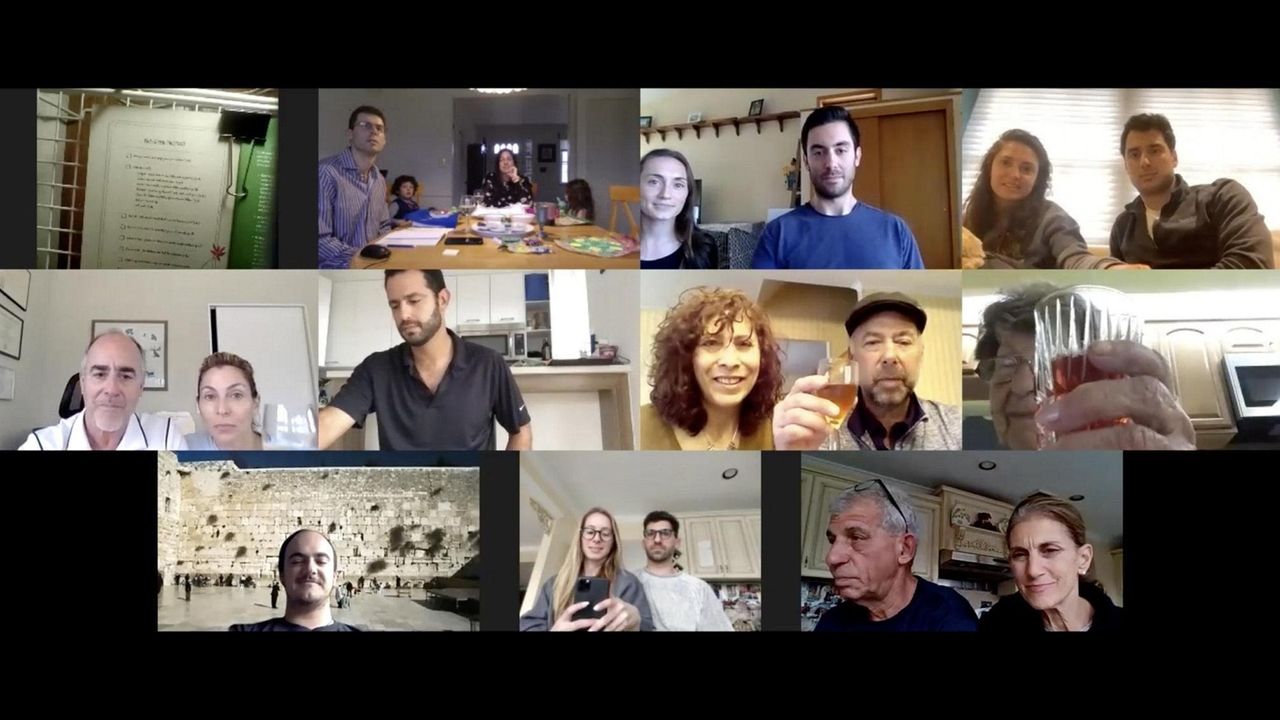 The Shermans of Great Neck — connected for a seder rehearsal Sunday via the app Zoom to Los Angeles; Highland Beach, Florida; Commack, New Jersey; Ames, Iowa; Dayton, Ohio; and Manhattan — say a blessing over wine then sing the Hebrew song “Dayenu,” which means “It would have been sufficient.” The family plans to gather again online for the Passover holiday later in the week. Credit: Sherman family

Why is this night different from all other nights?

The answer to that question — the start of Passover's traditional four — is being complicated this year by the coronavirus pandemic.

It means Adam Sherman of Great Neck is participating in a family seder on the app Zoom with at least 25 people from Los Angeles to Ohio to Sydney, Australia; Michael Soshnick of Roslyn Heights and his wife, Tricha Hill-Soshnick, won't be attending the usual feast with up to 40 people; and 94-year-old Dorothy Rothstein of Merrick is holding her seder alone but joining with family via FaceTime.

“I’ll be here by myself. I’ll do the best I can. I’ll read the Haggadah,” Rothstein said of the Jewish text for the seder service. “I’ll have matzo. I’m not one to get depressed or extremely lonely. I understand the circumstances.”

Around the world, attendance at the communal Passover meal, which is celebrated in most places Wednesday and Thursday nights, will be a scattered affair due to social distancing mandates. Extended families won’t gather. Public seders are canceled. There are plans to livestream seders on apps like Zoom, Skype and FaceTime, but these aren’t options for the most observant Jews, who don’t use technology on the holidays.

According to the Pew Research Center, 70% of American Jews said they participate in a seder.

Because of the virus, rabbinical authorities have banned large gatherings, citing the importance of health above all else. Some rabbis have made exceptions to the traditional technology prohibition to allow online seders this year.

Rabbi Anchelle Perl of the Mineola Chabad, a Hasidic outreach group with centers around the world, isn't one of them. He is distributing Seder-to-Go kits — with plastic cups, a seder plate, grape juice, matzo and other contents — on Long Island to people who are afraid to go out or are hospitalized.

Perl, who has been organizing public seders in Mineola since 1990, said this will be the first time in his 66 years that he will be alone, along with his wife, for Passover.

In a sermon last month, delivered over a conference call and on Facebook, Perl noted the Biblical roots of Passover: the Israelites’ freedom from bondage.

“The night before we left Egypt, we were actually quarantined in order to protect ourselves from the 10th plague” — the slaying of the Egyptians’ first born — “we all had to be home and there was a focus on the home, on the family,” said Perl, speaking in the first person to follow the tradition that Jews recount the Passover story as if experiencing it personally.

There is also more local demand for kosher-for-Passover food — observant Jews don’t eat any food or beverage with grains that have risen or are fermented, including bread, pasta, liquor and beer — according to Timothy D. Lytton, a distinguished university professor at Georgia State University College of Law who studies kosher food.

He noted that Jews who usually travel for the eight-day Passover holiday — to forego the considerable work to prepare an observant home for the holiday — can’t do so this year because of coronavirus-related cancellations. Rabbis have prohibited out-of-town traveling or guests.

“All those people are staying in town now, so all of the people who would otherwise have gone away are now competing for the same limited stock for Passover supplies in the local supermarkets,” he said.

Perl said he purchased lots of matzo to distribute in anticipation of attenuated effects of the crisis. Just before an interview with Newsday, Perl said, he fielded a call from a woman who asked him for help acquiring matzo and other food for the holiday, and “I’m going to take care of it.”

In Great Neck, Sherman, a banker, held a dress rehearsal of sorts on Sunday to sort out the logistics of the virtual seder.

“It’s a tradition that works best with the largest number of your loved ones,” he said.

His partner, Myra Maultasch, who worked in marketing before retiring, said the holiday is one of her favorites.

Sherman's son Mike, in Ohio, a major in the Air Force, took the lead on the technology, including helping his 92-year-old grandmother prepare to use the video chat app.

“He’s also responsible for training grandma, so she can figure out how to get on Zoom,” Myra said.

But for Soshnick, a lawyer who is also an observant Jew, technology isn’t an option. He also said the message of Passover resonates especially today.

“Right now we’re all to some extent imprisoned by this coronavirus," he said. "We’re not able to go where we want to go and do what we want to do, and we just don’t have the same freedom that we had a month ago.”

And who will ask the seder’s Four Questions, traditionally recited by the youngest in attendance, beginning with “Why is this night different from all other nights?”

At the Sherman seder, the duty will fall to Mike’s 5-year-old son, Bernie.

The person asking at Soshnick’s is unlikely to be a kid.

2:23
Pfizer shot may be available to kids as young as 12 in NY starting Thursday, Cuomo says
Have you lost a loved one to coronavirus? Tell us about them.
LI to start receiving $841M in federal stimulus funds
1:36
Officials: COVID-19 vaccine required for in-person SUNY, Hofstra students this fall
'Hamilton,' 'Lion King,' 'Wicked' coming back
Albany legislation targets fake vaccination cards
Didn’t find what you were looking for?