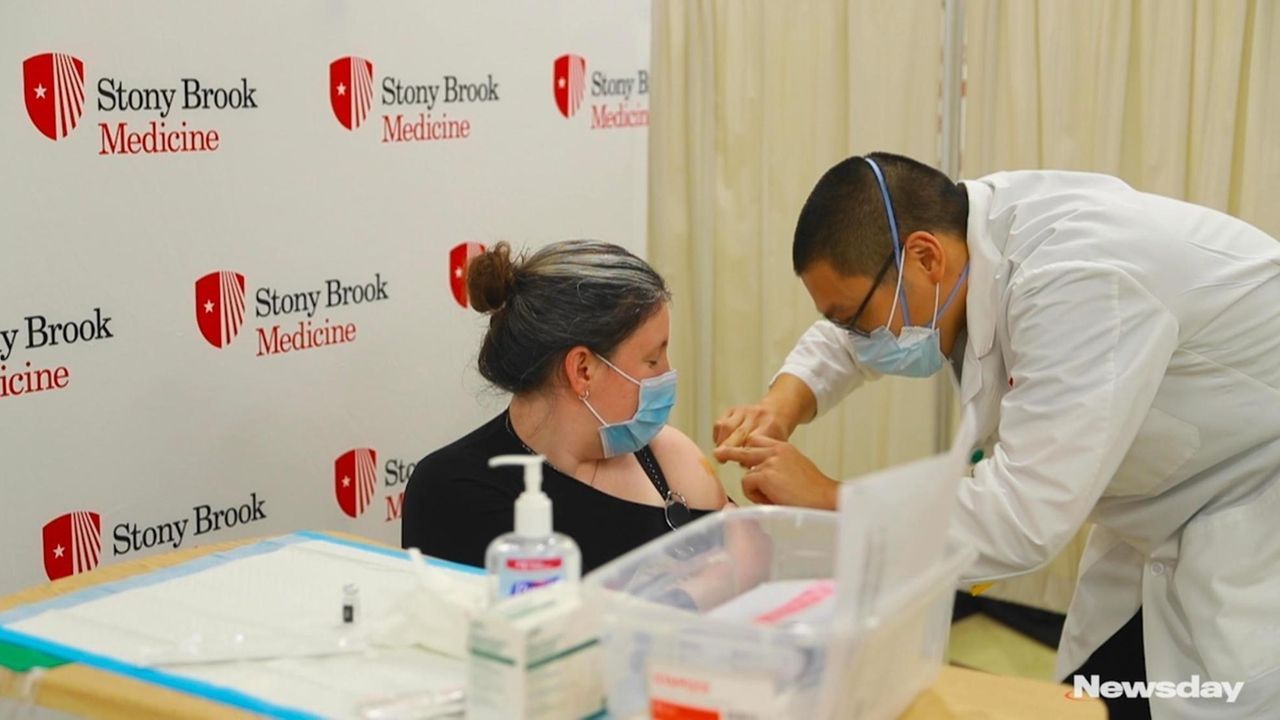 The state on Monday will expand COVID-19 vaccinations to outpatient medical practices and later to assisted-living residents, home health aides and visiting nurses, but it’s uncertain who will be next in line after that. Newsday's Steve Langford has more.  Credit: Newsday / Raychel Brightman; James Carbone; Howard Schnapp

The state on Monday will expand COVID-19 vaccinations to outpatient medical practices and later to assisted-living residents, home health aides and visiting nurses, but it’s uncertain who will be next in line after that — and it will be months before all New Yorkers can get vaccinated.

Vaccinations can begin Monday with doctors, nurses, radiologists, physical therapists and others who work closely with patients in outpatient settings, said Dr. Mark Jarrett, chief quality officer for New Hyde Park-based Northwell Health, which will help administer the shots. Public-health workers who have close contact with visitors, including those who administer coronavirus tests, also are eligible.

Outpatient-office employees who, for example, work from home handling billing, are not yet eligible.

The decisions on the order of groups to be vaccinated are made by a team of about 15 people, said Larry Schwartz, a former secretary to Gov. Andrew M. Cuomo brought back to the administration to oversee the state's plan. That group includes Schwartz, Health Commissioner Dr. Howard Zucker, budget director Robert Mujica and Gareth Rhodes, a longtime aide to Cuomo and state coronavirus task force member.

The vaccination process has not been without some confusion.

Dr. Kerry Fierstein, a Plainview pediatrician who is CEO of Allied Physicians Group, which has 33 offices, including 23 on Long Island, that primarily serve children, said Thursday that neither the state Health Department nor Northwell, which will vaccinate the employees, had provided enough details on the process.

Northwell spokesman Jason Molinet said two executives of the system reached out to Fierstein on Wednesday to explain the rollout plan.

Meanwhile, Schwartz said the timetable on when residents of assisted living facilities, home-health-care aides and visiting nurses will be vaccinated has not been determined, nor has the order of priority after that.

Cuomo spokesman Jack Sterne said vaccinations of essential workers and seniors are expected to begin later this month, although the order of vaccinations within that group of millions of New Yorkers hasn't been decided.

First responders who have not already been given priority — vaccinations of emergency medical services workers began Dec. 21 — are expected to be in the early phase of those vaccinations, he said. That includes, for example, police officers.

An independent advisory committee of the Centers for Disease Control and Prevention recently released recommendations on which groups of people should be prioritized for vaccines in the coming months, but the state is not required to follow them.

Schwartz said the state is reviewing the recommendations. "We’re having discussions about that right now," he said Thursday.

The CDC Advisory Committee on Immunization Practices on Dec. 20 recommended that the next large vaccination groups should be essential workers at highest risk and adults 75 and older. Other essential workers, in addition to people 65 to 74 and those 16 and older with medical conditions that make them vulnerable to serious COVID-19 illnesses, would follow.

Vaccinations in New York started on Dec. 14 with high-risk health care workers. About 274,000 New Yorkers had been vaccinated as of early Saturday afternoon, Sterne said.

U.S. Health and Human Services Secretary Alex Azar predicted in a statement on Dec. 23 that "we will have enough supply to vaccinate every American who wants it by June 2021."

But vaccinations are running behind the federal goal of 20 million inoculations ending 2020, with 4.2 million vaccines administered as of Saturday morning, according to the CDC. The real number is likely higher because of reporting lags, the agency says.

Dr. Aaron Glatt, chief of infectious diseases at Mount Sinai South Nassau hospital in Oceanside, said whether the June goal can be met "depends on many, many different things: How much vaccine is available, how easily we can get it out, what will happen with AstraZeneca, what will happen with J&J, [and] will people take the vaccine?"

Vaccines from AstraZeneca and the University of Oxford, and from Johnson & Johnson, are in clinical trials, and if they are given federal emergency use authorization, that would increase the amount of vaccine doses available.

The U.S. Food and Drug Administration authorized vaccines from Pfizer/BioNTech and Moderna in December. The British government on Wednesday became the first nation to give emergency authorization to the AstraZeneca vaccine.

Gurdip Mann, of East Meadow, said he has no problem with the CDC recommendation of splitting older adults into two groups, with those 65 to 74 like himself coming after people 75 and above.

"I will get it whenever I have my chance," said Mann, 65. "No need to rush … I survived the whole year. I can survive a couple more months."

The first group of nonmedical essential workers the CDC committee recommended for prioritization includes police officers, firefighters, grocery store employees, public transit workers and teachers — people viewed as having the highest risk of work-related exposure. In New York, members of those groups have not yet been prioritized for vaccinations, except for firefighters and police officers who also are EMS workers.

Dr. Henry Bernstein, a professor of pediatrics at the Zucker School of Medicine at Hofstra/Northwell in Hempstead and one of 15 voting members of the CDC committee, said drawing a line between different groups of people for prioritization was difficult.

"If we had enough vaccine to go around right from the outset, we wouldn’t need to have these allocation phases," said Bernstein, an attending physician at Cohen Children’s Medical Center in New Hyde Park.

Glatt said producing the billions of vaccine doses needed worldwide is a time-consuming, technical process and "needs to be done under the highest quality control. You want to make sure each dose does what it’s supposed to do."

'Hopefully we can get rid of this'

With limited doses, the CDC committee chose to prioritize adults 75 and older over other adults, but in the next allocation group to prioritize people 65 to 74 over those younger than 65.

"There’s no question those 75 and older have a very high incidence of morbidity and mortality," but those 65 to 74 also have a higher-than-average rate of death from COVID-19, Bernstein said.

Jill Handschu, 53, of Plainview, a middle school drama teacher and librarian in Jackson Heights, Queens, would be in the first group of essential workers if New York adopts the CDC committee’s recommendations. She plans to get vaccinated and hopes the shots help lead to the resumption of in-person instruction in New York City public middle schools — although children under 16 are not yet approved for the vaccines.

"I’m not even thinking about us," Handschu said, referring to teachers. "I’m thinking in terms of the children themselves, if there’s a way we can prevent getting them sick."

After high-risk health care workers were vaccinated last month, the list was expanded to other groups, including nursing home residents and staff, urgent-care-center employees, medical examiners and residents and staff of state-licensed group homes.

Joe Montilli, 53, a firefighter and former chief of the Lawrence-Cedarhurst Fire Department, received the vaccine Dec. 23 at South Nassau hospital. The Atlantic Beach resident said it was more to protect his 73-year-old mother, other family members and the general public than to protect himself.

"If I’m going [on a call] to help somebody else and I’m a threat to a patient, that’s not good," he said.

Scott Donnelly, 57, of Baldwin, assistant chief of the Freeport Fire Department, said he has gone on many calls for which he needs to interact with people who tested positive for the coronavirus.

Donnelly said he has wondered whether vaccine research was rushed, but he said that scientists "are confident this is what you need, and you have to take their word for it."

Bernstein, who closely reviewed vaccine research data, said the research process was accelerated, with some steps occurring simultaneously. But, he said, "People should not believe in any way, shape or form that the quality of the science has been compromised in any way."

Donnelly said he hopes his vaccination serves as an example to others.

"If you’re showing the public you’re trusting it, maybe the public will trust it more and then everybody gets vaccinated, and hopefully we can get rid of this," he said.

The Centers for Disease Control and Prevention Advisory Committee on Immunization Practices on Dec. 20 released recommendations on the order in which COVID-19 vaccines should be allocated. The committee earlier said that health care workers and residents of long-term-care facilities should be given top priority.

Some people fall in multiple groups for the prioritization categories, and vaccinations have not yet been authorized for children under 16.

The next recommended phases, and their estimated population, are:

See what percentage of people around you are fully vaccinatedSee vaccination rates by ZIP code, and more COVID-19 data. See the latest news on the coronavirus, vaccinesKeep up to date with the latest on the global coronavirus outbreak.