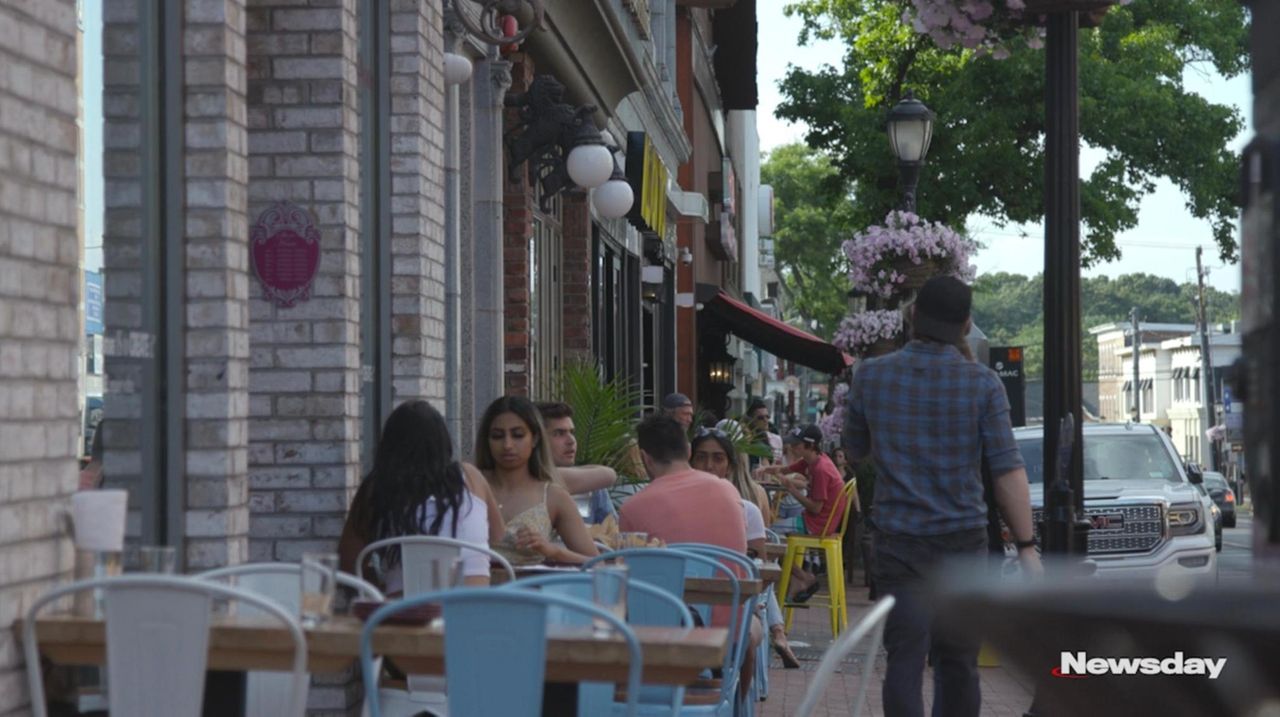 Long Island eateries can now offer outdoor dining, if social distancing guidelines are observed. Newsday spoke with a few restaurant owners on Friday to ask them about following the rules and dealing with crowds that may form on the streets. Credit: Kendall Rodriguez

As Long Island moves toward Phase 3 of reopening, which includes limited indoor dining, health care providers, restaurant owners and residents emphasize that guidelines must be followed to avoid "a disaster."

Long Islanders have mixed opinions on eating at restaurants indoors, with some nervous because of the greater chance of transmission of the virus in less-ventilated indoor settings, and others saying the rule that capacity be capped at 50% makes them comfortable enough to dine inside.

COVID-19 cases have continued to decline on Long Island, as manufacturing, landscaping, retail and outdoor dining returned over the past month. But indoor dining, which begins Wednesday, creates special challenges, because it's not as easy to keep people safely apart, and ventilation may not be as good.

"There is concern that in an enclosed space, there is an increased concentration of droplets," said Dr. Marc Adler, chief medical officer at NYU Winthrop in Mineola. "When you're outside, there is more air circulation."

Adler said when people are eating, they're not wearing masks, but are talking, sneezing and laughing — all of which lead to droplets.

"The biggest concern with transmitting COVID-19 are droplets," he said.

The state's guidelines, however, should mitigate risk, said Dr. David Battinelli, chief medical officer at New Hyde Park-based Northwell Health, which owns and operates 19 hospitals in New York. Those indoor dining guidelines include wearing masks when waiting for a table.

"If that's done successfully, and people wear masks when they're not eating, I think it will be all right," he said.

The Long Island region has crossed each phase without a spike in COVID-19 cases. The region began to reopen in late May, and Northwell Health, the largest health care system in the state, said it has seen a 40% decline in hospitalized patients since.

Dr. Patrick O'Shaughnessy, executive vice president and chief clinical officer at Catholic Health Services, which operates six hospitals on Long Island, said, "We are only as good as our weakest link, and every person has a role to play in this.

"If we do it right, we will be fine. If we don't, and we have to pause again, that would be a disaster," he added.

Social distancing is a bigger challenge when dining moves indoors, said Mark Lessing, who operates 10 restaurants on Long Island, including Library Cafe in Farmingdale, and Post Office Cafe in Babylon.

He said that's why diners waiting for a table at a Lessing restaurant will be asked to "go on a virtual waiting list, and we will text or call them when their table is ready. It minimizes the time standing around inside."

Lessing added that everyone must wear a mask when standing at his restaurants.

"There are also social distancing stickers on the walls, floors and bathrooms," he said. "We haven't seen our customers for a long time, and we want to keep them safe.

"I know the temptation is to get as much business as possible, and I understand the frustration. But we have to all follow the detailed guidelines or we all go backward," Lessing said.

As Evan and Karen Brett of Melville sat on a bench off New York Avenue in Huntington on Friday night, they said they weren’t entirely comfortable with outdoor restaurant dining — much less eating at a restaurant indoors.

“I’m less concerned about outside,” said Evan Brett, 46, as the couple waited for an outdoor table at Mission Taco down the street, even though the large number of people dining there and passing by gave them pause.

Having the choice of eating outdoors over the next few months, “I see no reason why I’m eating indoors this summer,” he said.

“Nobody’s wearing a mask when they eat,” which increases risk, he said.

Katelyn Stitt, 32, of Oyster Bay, said she would be comfortable with 50% capacity indoors.

“I would probably be with a friend or my fiance, and I know they’ve been very careful, social distancing and not going to places where there’s large gatherings,” Stitt said after eating with a friend at an outdoor table at Old Fields Barbecue in Huntington.

But she’s not ready for full-capacity indoor dining, because she wouldn’t know if the people sitting at the next table over were practicing social distancing.

“If you’re too close to someone, you don’t really know how they’ve been handling all this,” she said. “It just makes you a little wary.”

Christine Tumey, 50, of Greenlawn, also believes 50% occupancy strikes a good balance between safety and a way “to get back to some sort of normalcy.”

“We’ll get to 100 when the time comes,” she said while waiting for a table at Old Fields. “I think I’d rather be safe than sorry. We don’t want to go backward. Everything gradual, if everyone’s careful and everybody follows the rules.”

Marcus Shapiro, 24, of Syosset, said he’d be comfortable with indoor dining “as long as it’s spread out a little.”

That would include social distancing, making sure to carefully clean cutlery and perhaps keeping windows open, she said.

“Whatever they could to make it more clean,” Girardi said.

Erica Talkofsky, 23, of Plainview, said that with so much progress in combating the virus, “I think they’re doing it at too slow a pace,” although she said she is fine with 50% capacity at first, because “you have to test the water.”

“The virus has weakened itself,” she said. “There’s no reason to be scared.”

Personal care businesses, such as nail salons, spas and tattoo parlors, also can reopen with limitations, which include operating at 50% capacity and closing waiting rooms, according to the state reopening website.

"Right now we have a false sense of security," he said. "If one person travels here and brings COVID with them, it could become an issue."

"We saw it at hospitals," Battinelli said. "Protect yourself. Wear a mask."

All phases include restrictions, such as social-distancing and mask requirements.

Offices at up to 50% capacity

NOT OPEN BY PHASE FOUR

2:11
Cuomo: NY 'doing well' on virus measures, will return to full state fair
Novavax: Large study finds COVID-19 shot about 90% effective
2:38
A year later, LIers still have lasting effects from COVID-19
COVID-19 cases keep dropping in New York
1:20
Taking the spa on the road
FDA: Some J&J vaccine doses can be used, but many must be tossed
Didn’t find what you were looking for?