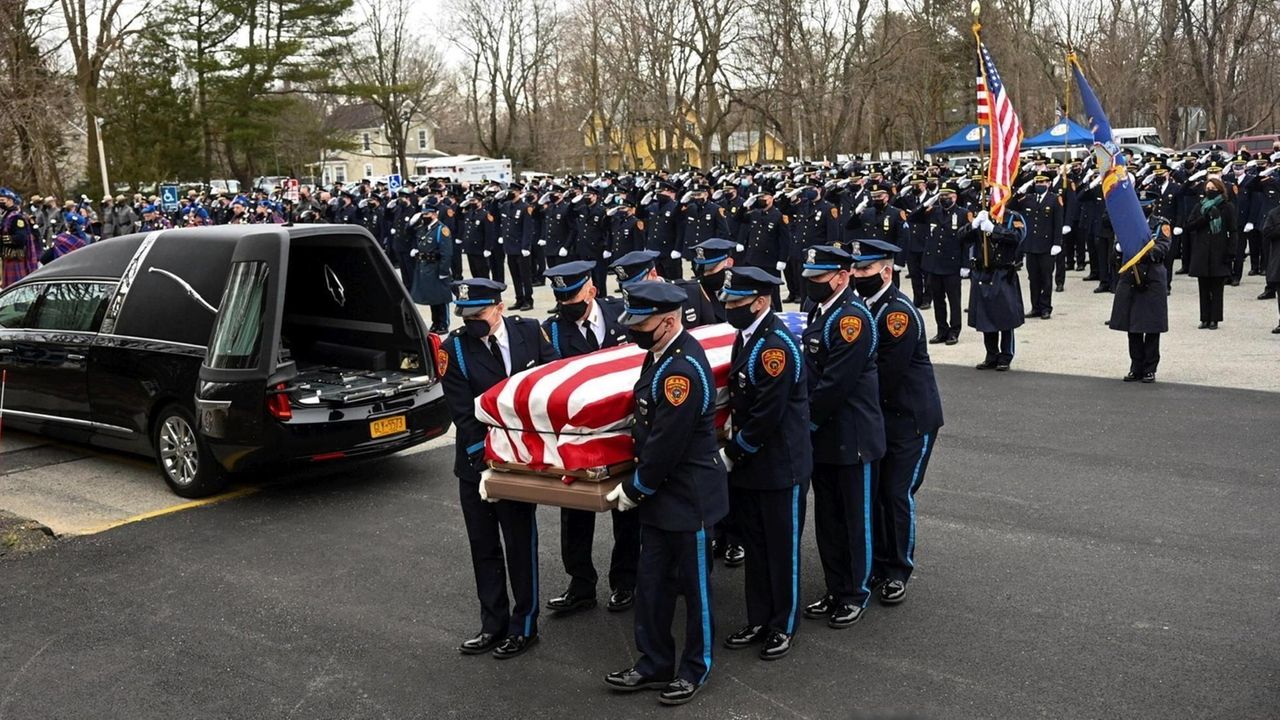 As a light snow fell and bagpipes played, family and friends of Suffolk police Lt. Robert Van Zeyl as well as his fellow cops filed into a Port Jefferson Station church Tuesday.

Outside St. Gerard Majella Roman Catholic Church, hundreds of police officers from across the state assembled. Inside, an American flag was draped across the top of the veteran Suffolk officer's coffin.

It was both a familiar scene and one holding a uniquely tragic distinction. Familiar, because Tuesday's funeral service for Van Zeyl marked the passing of yet another Long Islander felled by the relentless coronavirus pandemic. Uniquely tragic because he was the first Suffolk police officer to die of COVID-19.

The funeral began just before noon. Suffolk County Executive Steve Bellone stood up and spoke directly to Van Zeyl's daughter, Hailey, and son, Tyler, both 14, and did his best to comfort them as they face lives without their father.

"It's not fair that you lost your dad at your age, but I will tell you as I did yesterday that you have an extraordinary legacy," Bellone said. "I know he's your hero, but he is a hero to all of us. Your dad led a life of service in which he helped countless people. It's impossible even to know the full impact that he's had on people's lives during the course of his lifetime, but I know that it is great. And you'll carry that legacy and all that was in him in you the rest of your life," Bellone said.

Van Zeyl, 60, had worked in Suffolk's Second Precinct in the Town of Huntington since 2015, according to department officials. He started out working in the Fifth Precinct, headquartered in Patchogue, before earning a promotion to sergeant in 1994 and becoming a lieutenant in 2003. He served as commanding officer of the Applicant Investigation Section and the Administrative Service Bureau before moving to the Second Precinct, officials said.

The 36-year veteran Suffolk cop earned more than a dozen awards, including two "Cop of the Month" honors and an "Excellent Police Duty Award" for making a dozen or more self-initiated drunken driving arrests in one year, officials said.

After the funeral, Suffolk County Police Chief Stuart Cameron, a longtime friend of Van Zeyl, described him as a passionate musician in his spare time. Cameron said the two shared a mutual "desire to help people."

"Bob was a real people person. He really liked people a lot," Cameron said. "His desire for helping people … was really the mold for a great police officer, and that carried throughout his whole career."

No one would have faulted Van Zeyl had he chosen to retire when the pandemic hit, Cameron said.

"I truly believe in my heart that he cared about the people who worked for him and he didn't want to leave them behind in a crisis and he wanted to make sure he got them through this," the police chief said. "Unfortunately, that tragically resulted in his death. It's a sad day for the Suffolk County Police Department."

He was "a fighter," Hart said after the funeral, and someone dedicated to helping communities his entire career. Hart said she hoped his children knew the department will never forget him.

"We will always remember their dad, who was really a hero," she said. "And he will always be remembered by us, the Suffolk County Police Department, as a hero."