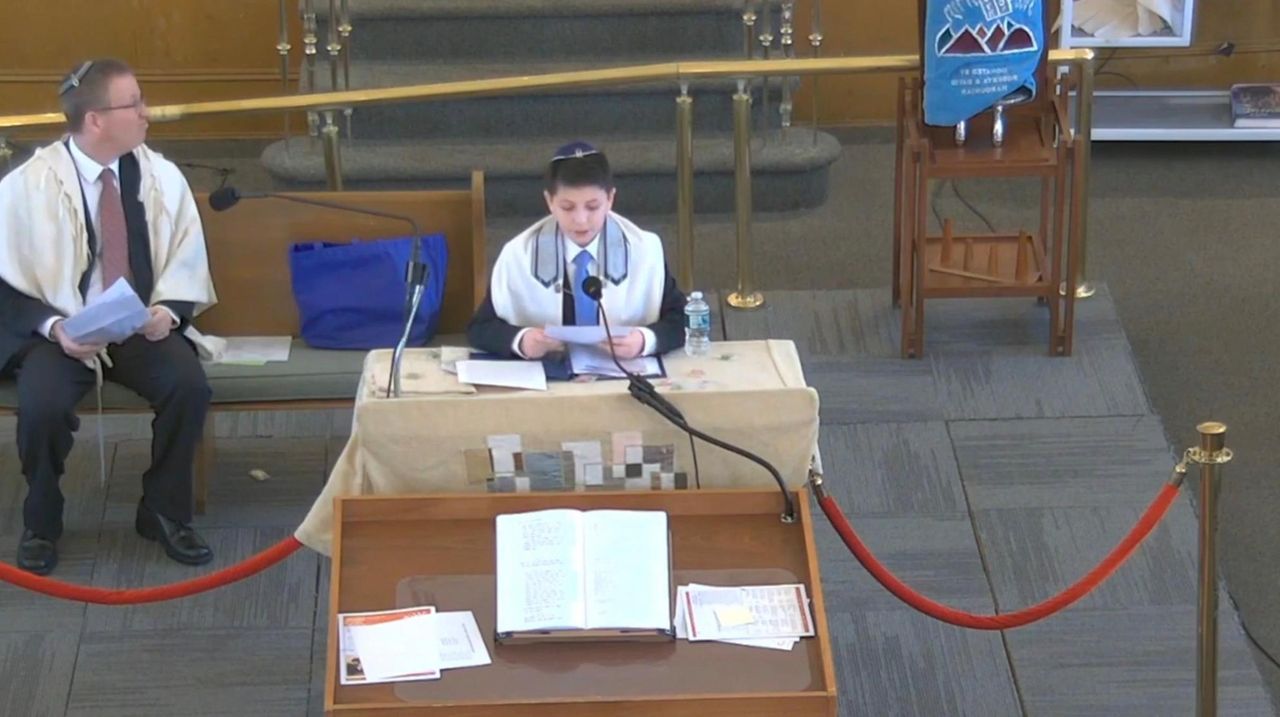 Mitchell Bloom remained "stoic and calm," according to his mother, Michelle, after his bar mitzvah party got canceled due to the coronavirus outbreak. The service was still held at Temple Israel in Great Neck and livestreamed. Here is a snippet from Mitchell's speech. Credit: The Bloom family

Coronavirus is creating upheaval for Long Island's religious world with some priests unable to administer last rites or conduct funerals, a family livestreaming a bar mitzvah for the first time in their synagogue’s history, and numerous people postponing milestone events like weddings.

Some of it has unsettled some clergy, while others say they are adapting to the crisis and devising innovative ways to live out their faith as the virus shuts down social — and spiritual — interaction.

But Ellis was unable to administer last rites because of church directives on “social distancing” aimed at curbing the spread of coronavirus, and a lockdown at the hospital where the patient was being treated.

“For me as a priest this is something that is deeply painful, to not be able to be there for my parishioner,” Ellis said. “To be honest, my heart breaks. This was someone I knew.”

She has decided to forgo a funeral inside the church to avoid drawing a crowd, and will preside only over a graveside service — instructing relatives to limit the numbers and observe social distancing.

Another Episcopal priest, The Rev. Rick Simpson of St. Mark’s in Islip, also could not administer last rites to a parishioner who died this week.

He, too, is forgoing a funeral, partly because the family does not want relatives getting on planes to fly in from out of state and risk infection with COVID-19. He’s doing a small graveside service for immediate relatives who live locally.

“Literally, I am expecting two people for the graveside besides myself,” he said.

Not having a funeral now comes at a price, he said. “It’s hard to get closure with the death of a loved one when you can’t be there.”

The coronavirus crisis, he added, “is having a dramatic effect on people’s lives.”

Simpson also has a wedding scheduled in the church this weekend. Though numerous guests canceled, the bride and groom decided to go ahead with a small ceremony anyway. That’s partly because it is their second marriage and they already have their marriage license, which is valid for 90 days.

They plan to livestream the wedding on Facebook. The reception is canceled.

At Church of St. Patrick in Huntington, priests hope to salvage one sacrament — Confession — by moving it outdoors to avoid the private booths normally used in which diseases are more easily transmitted.

Catholics may drive into the school parking lot where a priest will be waiting on Saturdays from 4 p.m. to 5 p.m.  They'll roll down their windows to make their confession to the priest who will remain a safe 6 feet away.

Msgr. Steven R. Camp said he found the idea on social media. The drive-thru confessions will last until Easter.

“It is something I believe will keep our parishioners spiritually healthy in a time where their physical health and wellness is being protected,” Camp said.

Coronavirus is having an impact on synagogues as well.

She had already planned a luncheon at Temple Israel synagogue for 300 people, and, later, a casino night for her son and his friends. They had been planning the event for a year.

“Usually 2 weeks leading up to your child’s bar mitzvah are filled with last-minute vendor confirmations, menu-tweaking, clothing choices, and your child focusing on last-minute review,” Bloom wrote in a Facebook posting. “Our last two weeks were filled with … uncertainties, stress, and intense sadness while the world around us evolved into chaos and fear.”

By midweek, even before government officials banned group meetings larger than 50 people, they decided to pull the plug.

“We didn't feel that it is was socially responsible to gather 300 people in close quarters,” she recalled thinking, “People are so on edge, and the recommendations are now to socially distance ourselves. Gathering our loved ones close together at this time did not feel like it would be in the spirit of what we were trying to accomplish. Ultimately we did not want to put anybody at unnecessary risk.” Bloom said.

“This service was not anything like it had originally been planned, but felt like it was exactly how a bar mitzvah should be. The ceremony was meaningful and consistent with the core values of this milestone. It was truly unforgettable” she said.

Still, she said “was completely devastated” by the cancellation.

But she and synagogue leadership came up with a solution: livestream the bar mitzvah.

To Bloom’s surprise, the event turned out wonderfully.

Only a small crowd was invited, but 700 people viewed the event online. Her son gave a speech about a recently deceased member of the congregation called “the candy man” that brought many people — in the synagogue and at home watching — to tears, she said.

“This service wound up being more meaningful and more at the core of what a bar mitzvah should be than I ever would have expected,” she said.

Rabbi Charles Klein of the Merrick Jewish Centre said he didn’t think many others would take the online route. Instead, most of his congregants are postponing religious events scheduled for the next couple of months until fall.

“No one wants to have a wedding under these circumstances,” he said. Livestreaming a bar/bat mitzvah is not a joyous celebration that requires the presence of people — what the Jewish tradition calls "a simcha," Klein said.

“There is an emotional impact of being surrounded by family and friends at a very important turning point in life,” he said. “And people … want to celebrate with real live people who can hug and kiss them and be near them.”

He said his synagogue was postponing weddings, bar/bat mitzvahs, lectures and programs until at least September.

It would be “morally irresponsible” not to postpone, even with groups under 50, he said. “No one is looking to put other people’s lives in jeopardy at this point.”