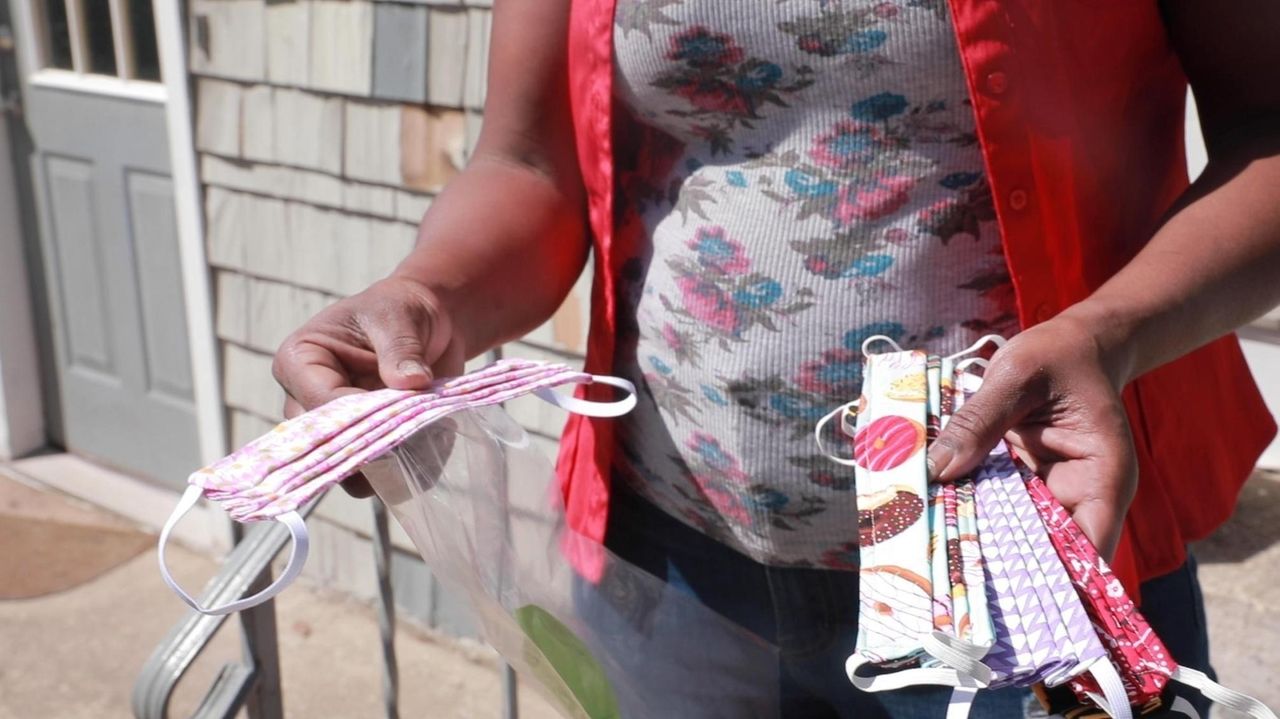 Newsday's Steve Langford talks with Long Islanders about difficulties paying rent during the COVID-19 pandemic, on this first day of the month. Credit: Newsday / Yeong-ung Yang

Long Island tenants, many of them devastated by job losses and health concerns because of the coronavirus pandemic, now face a new crisis as their rent comes due Wednesday for the first time since the state ordered non-essential businesses to shut down.

Erica Prince, 49, was just about to start a new job as an aide at a home health care service in Hauppauge last month when the company suspended all training for new hires.

With her job on hold indefinitely, Prince worries about how she will pay the $1,400 rent for the one-bedroom apartment in West Babylon she shares with her 13-year-old daughter.

Her landlords, she said, “are willing to work with me…but one way or the other, whether it’s now or later, I have to pay.”

She said she has applied for jobs at supermarkets but hasn’t heard back. “It’s a scary time right now,” she said.

Prince, an Army veteran, said she’s contacted the Department of Veterans Affairs for help. To make ends meet, she’s been sewing face masks and selling them on Facebook Marketplace and through her Instagram account, @Designs_by_MsE.

“I’m just praying it’s all over soon and life can get back to normal for all of us,” said Prince.

Prince’s predicament is shared by renters across Long Island and the nation.

A recent survey found that one in three renters expect to have trouble paying their rent in the coming months, said David Howard, executive director of the Washington, D.C.-based National Rental Home Council, which represents single-family rental landlords.

However, he said, most property owners "don’t have the capacity or the means to absorb any kind of long-duration break in the rent cycle."

The state last month imposed a 90-day moratorium on evictions, and landlords are likely to offer payment plans to tenants, real estate attorneys said. But advocates for renters say that is not likely to help many renters facing sudden job losses and costly rents.

Across New York, more than 80,000 people filed for unemployment during the week ending March 21, nearly six times the number who filed the week before, the state reported.

On Long Island, rents averaged $2,266 in March, according to RealPage, a Texas-based software and data company.

State Sen. Michael Gianaris (D-Astoria) has introduced a bill that would impose a 90-day suspension of rent payments for those who have lost jobs due to the pandemic; it also would suspend some landlords’ mortgage payments. The measure was in the Senate Judiciary committee as of Tuesday evening.

Lisa Tyson, director of the Long Island Progressive Coalition,  said the rent suspension is needed;  "If a family can't afford this month's rent, how are they going to afford three months’ worth in July?"

If the proposed moratorium is paired with relief for property owners, it could be beneficial, said Matthew Zangwill, a partner with Ruskin Moscou Faltischek PC in Uniondale. But landlords must pay mortgages, taxes, utilities and upkeep, he said. Some landlords can get mortgage deferrals, but not all are eligible.

Tenants who are unable to make rent payments should contact their landlords, real estate attorneys said. “Probably the best thing on both sides is to be candid with the landlord and say, ‘look, I can't afford to pay you right now. I'm not making any money. Hopefully I'll be able to get some money in the stimulus package,’” said John Breslin, a real estate attorney in Huntington. “It’s in the best interest of the landlord to figure out a way to make it work.”

Landlords "would be crazy if they don’t work with people,” said James Coughlan, a principal at East Setauket-based Tritec Real Estate, which has built nearly 900 apartments in Ronkonkoma, Patchogue and Port Jefferson.

But if legislators don't provide government support for a rent moratorium, “in essence they’re just shifting that ... to the landlords and making landlords eat two months of rent," he said. "I know that there's this image that landlords... have incredible profit margins. And it's a misperception. It costs an awful lot of money to pay for an apartment building.”

An Amityville real estate investment company, Leave the Key Homebuyers, has offered a 5% rental discount to all its tenants, as “extra money they could use for groceries or the light bill,” said Jamell Givens, managing member of the company. Givens said he is offering flexible terms to renters who have lost their jobs.

He said about half the tenants in his company’s 22 Suffolk County rental homes are likely to be able to pay their full rent, at least for this month. He said his company can survive for a time without collecting full rental payments, but not all property owners can, and some rental properties could end up falling into foreclosure.

“For a smaller investor that doesn’t have the means, they could get into trouble,” he said.

One of Givens’ tenants is Lawrence Roberts, who lives in a two-bedroom duplex in Patchogue with his wife, Shanitra, and two sons.

Roberts, 42, works as a truck driver, and Shanitra recently lost her job as a deli worker, Roberts said.

“I know there are people out there who are worse off than I am, but any little thing helps,” Roberts said.

Not all landlords are offering breaks on the rent.

Zach Zeankowski, 27, of Levittown, lost his job as a server at a restaurant in East Meadow the day Gov. Andrew M. Cuomo announced restaurants would be limited to takeout and delivery only.

“I didn’t know I was working my last day when I did,” Zeankowski said. “Nobody had time to prepare, stash extra money away or pick up extra shifts.”

He said he’s been struggling for two weeks to access state unemployment because of jammed phone lines.

Zeankowski said he pays $1,000 for the studio apartment he shares with his dog, a Labrador-Pitbull mix named Liberty. He had to ask his landlord for an extension on his April payment as he waits for family members to send him some financial assistance. His landlord, he said, has not offered any adjustments to his rent.

But what Zeankowski wants more than anything is for the government to offer assistance, he said.

“It’s hard finding a solid list of resources for help right now,” he said. “I have bills due. They need to get services working for us because it’s getting real out here, real quick.”