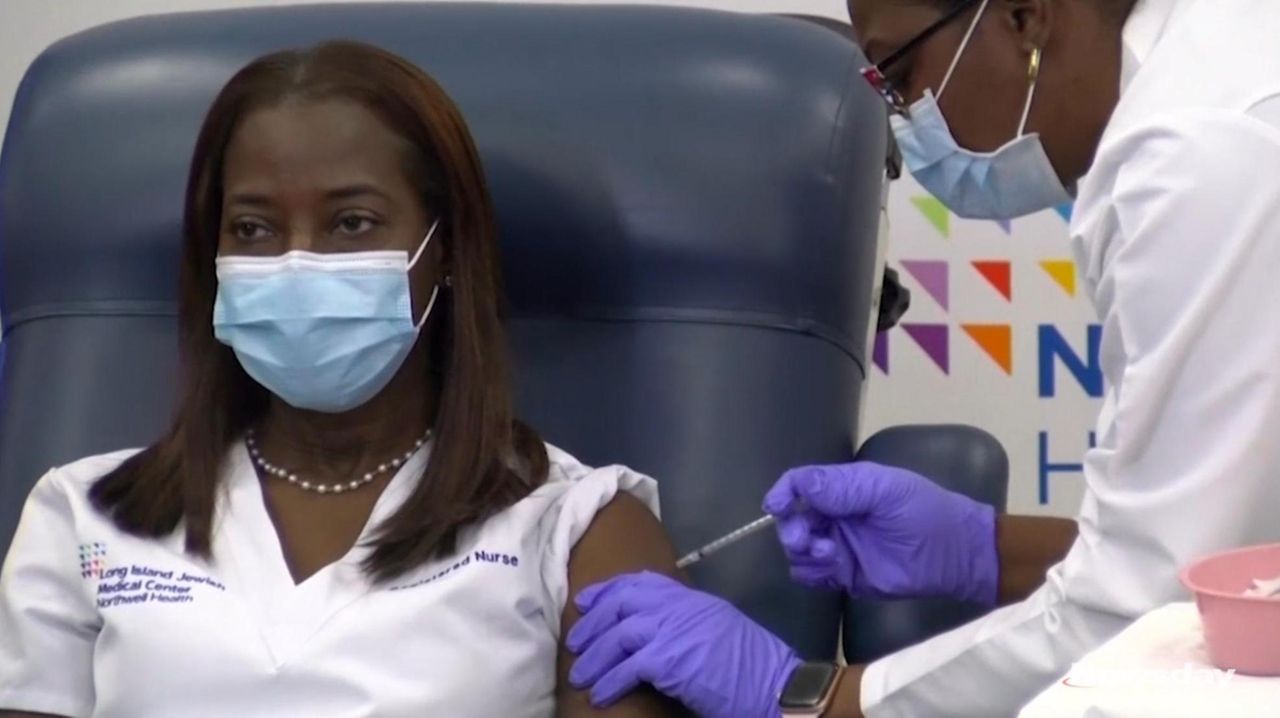 Once vaccine supply exceeds demand, the challenge will be to persuade hesitant individuals to get vaccinated against COVID-19. Martine Hackett, associate professor at Hofstra University, says the message must be clear: Listen to people you trust and can answer your questions. Credit: Newsday / J. Conrad Williams Jr.

Republicans are most reluctant to get vaccinated against COVID-19, while Black Americans — who had been among the most vaccine-hesitant — are increasingly planning to get the shot, polls over the past few weeks have found.

The surveys show that Republicans are much more likely than Democrats and independents to say they don't plan to get vaccinated. An early March NPR/PBS NewsHour/Marist poll found that 41% would not get vaccinated. Overall, surveys have found that 20% to 30% of Americans do not plan on getting the vaccine.

Resistance to inoculation affects everyone, because scientists say 70% to 90% of the public must be vaccinated to reach herd immunity, when so many people have antibodies to the coronavirus that it can no longer spread widely, and when public officials say society can return to a semblance of normalcy. Vaccines are not yet authorized for children under 16, making the goal more challenging.

But as the supply of vaccine increases and eligibility broadens, religious leaders, celebrities, teachers, pharmacists and neighbors down the block are among those who should be enlisted in efforts to make people more comfortable with taking the vaccine, health care experts said. Those experts agree that different approaches are needed for different communities.

"One message is not going to fit everybody," said Perry Halkitis, a public health psychologist and dean of the Rutgers School of Public Health in New Jersey.

A Kaiser Family Foundation poll released Tuesday found that enthusiasm for a vaccine has increased most among Black Americans, from 35% who already got vaccinated or wanted to get a shot "as soon as possible" in January to 55% in March — although that was still slightly lower than the proportion of Hispanics, 61%, and whites, 64%, who said the same thing. Other polls also found an increasing willingness among Black respondents to get inoculated.

Polls have had varying findings on how receptive Latinos are to being vaccinated, with some finding more hesitancy among Hispanics than among white and Black respondents. For example, a survey conducted Jan. 20 to Feb. 1 for nextLI — a Newsday initiative — found that 55% of Black respondents, 65% of whites and 46% of Hispanics planned to get vaccinated.

But that may be because Latinos are on average younger than other ethnic groups, and young people are less likely to say they’ll get vaccinated than older adults, said Dolores Albarracín, a professor of psychology, business and medicine at the University of Illinois at Urbana-Champaign.

Did Trump miss an opportunity?

Halkitis said an opportunity was missed when former President Donald Trump got vaccinated behind closed doors before he left office, instead of in front of cameras, as then-President-elect Joe Biden did in December.

"When you model behavior, we know from a psychological perspective, people are going to follow …," Halkitis said. "Whether you believe in [Trump's] politics or not, he’s a huge influencer, and there’s a segment of the population that would have gotten vaccinated as a result of that."

A national poll of 1,000 Republicans conducted March 14-16 for the Maryland-based health care nonprofit the de Beaumont Foundation found that trust in the vaccine rose significantly when Republicans were reminded that development of vaccines occurred under the Trump administration and that the former president got vaccinated.

Even so, 81% of respondents said they would put more stock in what their doctor says about vaccines than what Trump says. Trump has encouraged the public to get vaccinated.

That provides an opening for "facts delivered by apolitical messengers," said Brian Castrucci, president and CEO of the foundation.

Most Republicans have a distrust of media and government, he said. Republicans’ own doctors are most trusted, the poll found. And facts such as that many people who had COVID-19 struggle long-term with fatigue and other problems, and how nearly all doctors offered the vaccine have taken it, were persuasive, according to the poll.

What doesn’t work is bashing Republicans for not getting vaccinated or making them feel like they’re being told what to do, Castrucci said.

The more people who get vaccinated, the more vaccination becomes "the norm," Albarracín said.

Professor: Think 'about whose opinion matters to you'

"Trusted messengers" can’t be people from the outside who parachute into a community, said Martine Hackett, a professor of health professions at Hofstra University in Hempstead.

"Think about who are the people whose opinion matters to you, and who you have respect for, people who have helped you out in the past," she said.

Community members should be asked who they most trust, and that input should be used in identifying messengers, Hackett said.

That may include religious leaders or pharmacists for some, she said. But it also may include someone who isn’t considered a community leader — but whose opinion carries weight and could be trained to talk with neighbors and friends about vaccines, she said.

Hackett said one of the most effective ways to influence people will be "how this represents the best chance for people to interact in the way we did before the pandemic."

"By choosing not to get a vaccine, you’re going to be choosing to not participate in everyday life," she said.

Hackett pointed to how some workplaces may start requiring them, and how Rutgers University announced March 25 that vaccinations will be required for in-person learning.

New York is requiring a vaccination or negative coronavirus test result to attend Yankees and Mets home games, and Gov. Andrew M. Cuomo on March 26 announced an electronic pass that will indicate if the bearer has been vaccinated or tested negative. Many will opt to get vaccinated rather than repeatedly get tested to attend events, Hackett said.

Halkitis said that, whether it’s a celebrity "influencer" getting vaccinated, or a local teacher or rabbi promoting vaccinations, the motivation to get inoculated should be part of the outreach.