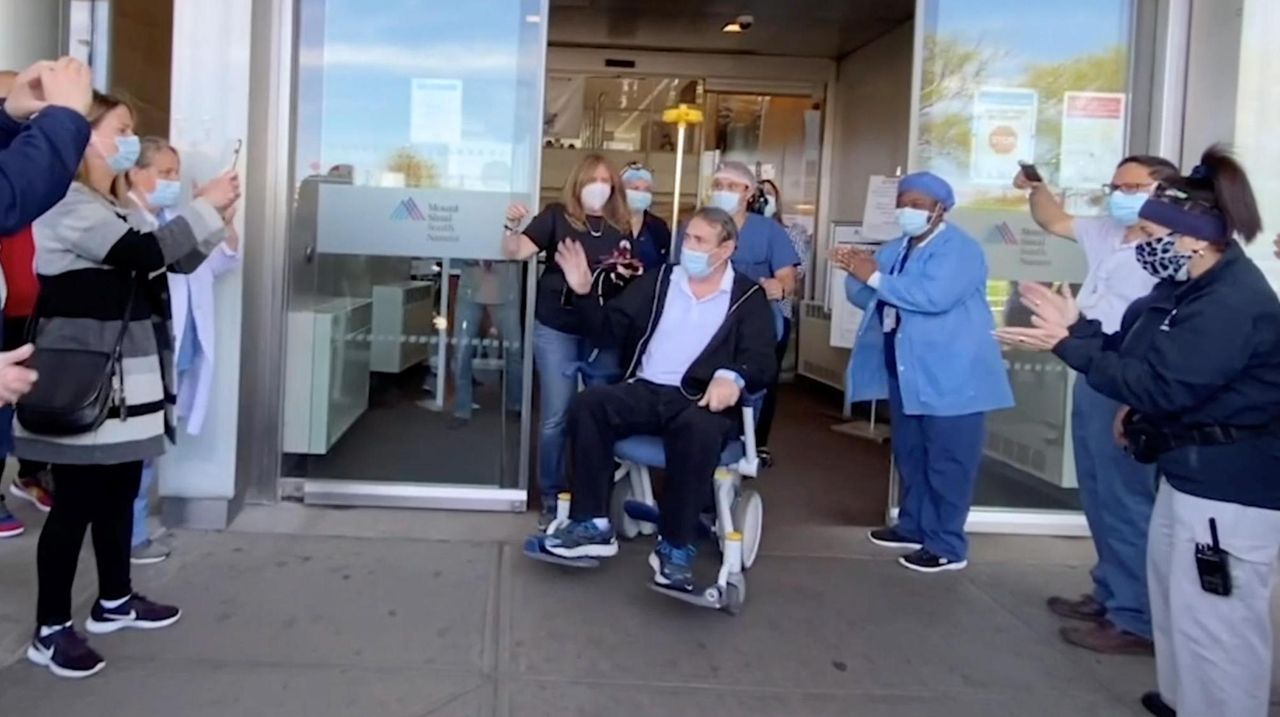 A retired NYPD officer who was hospitalized for two months in a life-or-death battle with the coronavirus left Mount Sinai South Nassau on Wednesday to thunderous applause from his family, friends and health care workers.

“He is a miracle,” said Elizabeth Greco, a retired Suffolk County police officer. “By the grace of God and the [Mount Sinai] staff, he is alive today and we are so grateful.”

Dozens of well-wishers who gathered at the entrance of Mount Sinai, many holding signs that said “We miss you,” and “Tony Strong,” erupted into cheers as Greco left the hospital shortly after noon in a wheelchair.

The retired NYPD cop, who spent 16 years with the department and was most recently stationed at the 77th Precinct in Brooklyn, thanked his family and friends for their support but otherwise did not speak.

Greco’s pulmonologist, Dr. Frank Coletta, said the virus caused “significant injury” to Greco’s lungs, dropping his oxygen levels to dangerously low rates. Greco’s condition was so precarious, Coletta said, that he was transported to Mount Sinai’s Manhattan facility for treatment with a life-supporting machine known as ECMO that does the work of the lungs and heart.

Greco recovered and ultimately did not require the treatment, Coletta said, but he later had to undergo surgery for his inflamed lungs. His wife told reporters he was placed on a ventilator twice during his hospital stay — once for 11 days, the other for 10.

“We are so grateful for the amazing staff,” Elizabeth Greco said. “Everybody, the doctors, the nurses, the cleaning staff, really, they saved his life twice.”

Coletta said it will take about four months for Greco to feel close to 100%. He will spend the next few months undergoing extensive physical therapy, Coletta said.

“That will be the main issue,” the doctor said, “to build his strength back up.”

Elizabeth Greco’ voice crackled with emotion as she thanked the Mount Sinai staff for returning her nearly lost husband back to her family.