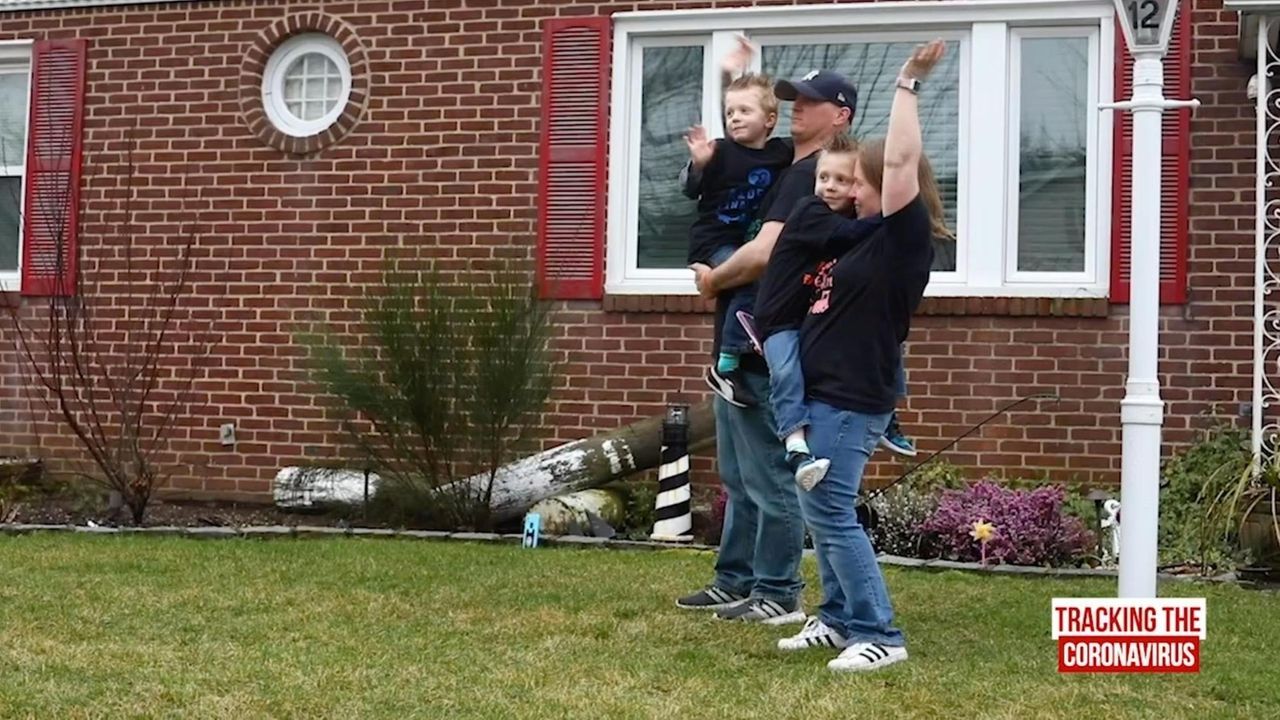 Neighbors and members of the local fire department held a parade for a 5-year-old boy from Rockville Centre who had his 26th and final spinal tap in his fight against leukemia.  Credit: Newsday / Chris Ware

Neighbors and supporters knew they couldn't be there in person to celebrate 5-year-old Aiden Schaefer's final spinal tap for leukemia.

So, they took to their cars instead and with horns honking and hands waving, the Rockville Centre community let the little boy know in a vehicle parade past his home Sunday that he was their hero. There were fire trucks and bagpipe players from the NYPD Pipes and Drum Band. Residents held up signs to celebrate that Aiden had just completed his last chemo infusion as well as his 26th and final spinal tap after being diagnosed with acute lymphoblastic leukemia more than three years ago.

"We can't thank everyone enough," said Aiden's father, Patrick Schaefer, 39, who noted that the community has supported Aiden and his family since the start. "We realize that family is not just blood but everyone around you. We are truly humbled and blessed."

Aiden was joined by his parents, including his mother, Denise, and his 5-year-old twin brother, Mason. The family stood in the front yard and waved and clapped.

"The fire trucks were the best," Aiden said after the parade. His father noted that all the fire companies from Rockville Centre joined in the vehicle parade.

This past week Aiden went for the spinal tap treatment at The Mount Sinai Hospital in Manhattan. Typically, he is joined by the whole family when he has treatment. But due to the coronavirus, only one parent could go and Aiden was joined by his mother.

Aiden still is taking daily chemo pills at home and he is scheduled to be fully done with treatment on June 14, his father said.

The family had planned an outing after Aiden's last treatment at Mount Sinai but due to the virus they had to stay at home.

A handful of neighbors and family members were planning to ride by the home but the whole community got involved in the effort, which was helped by Aiden's grandma, Judy Schaefer, and the family's friend, Patrick O'Connor of East Rockaway, who is a member of the NYPD Pipes and Drum band.

"It was supposed to be a little parade of cars," Patrick Schaefer said.

Neighbor Doug Goodstein said the community is a tight-knit one and everyone was happy to pitch in. The parade made two laps by Aiden's home. One motorist held a handmade sign outside the car that read "Amazing Aiden. Final Spinal."

"It's vital during these times to have some sense of happiness when everyone is so sad and confused and nervous and anxious," said Goodstein, 49, who also helped organize Sunday's parade. "When you have something that can put a smile on peoples' faces — especially a 5-year old who just went though a three-year battle with leukemia — it makes you feel good during these days that are anything but."