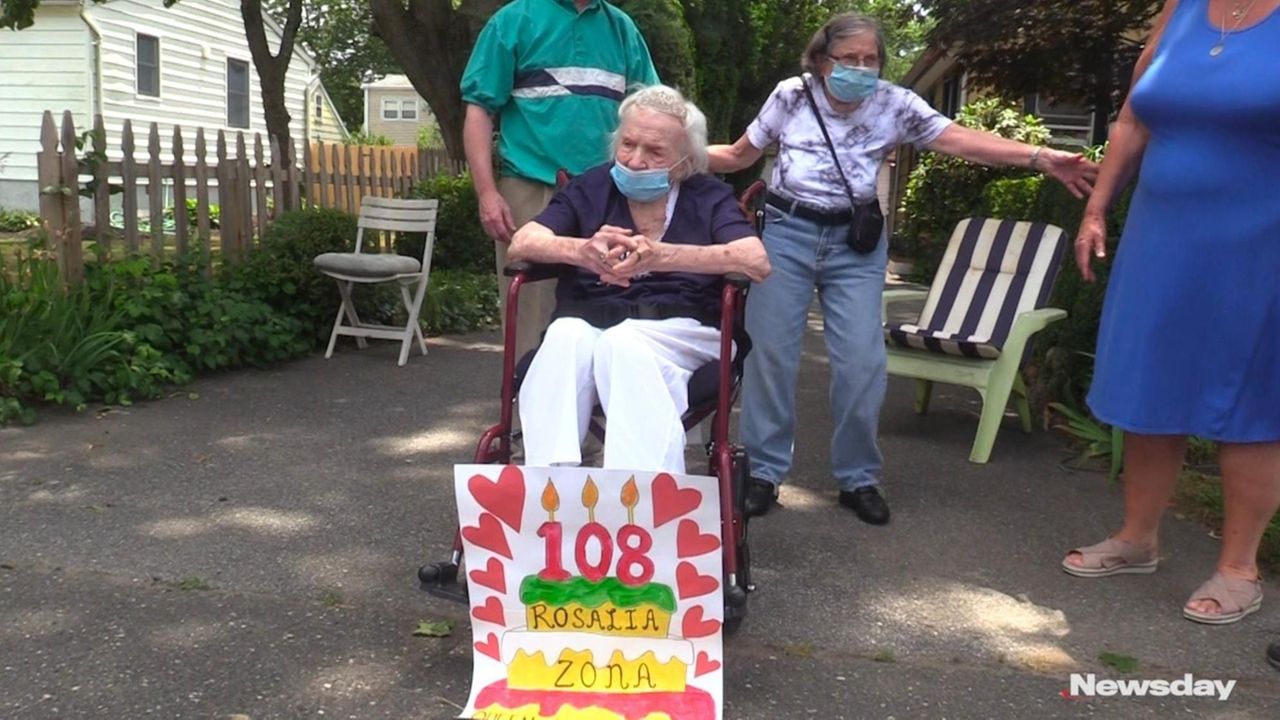 Family and friends celebrated the 108th birthday of Rosalia Zona of Huntington Station on Sunday with a drive-by parade. Credit: James Carbone

Rosalia Zona’s family and friends were not going to let Huntington Town’s oldest living resident’s birthday go by without a celebration — even amid a pandemic.

Friends, family, town officials and members of the Huntington Manor Fire Department held a birthday parade — with cars, fire and police vehicles and people just walking — to celebrate Zona, a trilingual former model, artist and mother of five who turned 108 earlier this month.

Zona was born in Manhattan on June 17, 1912, two months after the Titanic sank, and was raised in Manhattan and a village outside Milan, Italy, said her son John Havlicek. On Sunday, a crowd turned out for Zona, who was wearing a tiara and T-shirt that read “Queen of Huntington” as she sang songs in Italian and Spanish from a wheelchair outside her Huntington Station home.

“Whether she seeks it or not, she winds up being one of those people everybody gravitates to,” said Havlicek, who at 68 is the baby of his siblings. “It’s just the way she is.”

The event was organized by Zona’s 78-year-old longtime housemate and friend Mary Ann Romano and Julia Frangione, director of the senior division for Huntington Town.

“We know we’ll be back to normal one day soon and we’ll all be able to hang out at the senior center,” said town Supervisor Chad Lupinacci, who also attended Zona’s 107th birthday celebration last year at Jonathan’s Ristorante in Huntington.

Zona is the town's longest-living resident, but she is not the only one to make it to 108, said town Clerk Andrew P. Raia, who attended the party. Raia’s great-aunt Julia Morrell also lived to 108 and died in 2011.

Zona worked as a model and later a fashion consultant for the now-defunct B. Altman and Co. on Fifth Avenue in Manhattan. She went back to school at age 59, which also is when she met Romano: The two majored in advertising and communications at the Fashion Institute of Technology. Both graduated, but Romano went back to school to become a sociologist.

“She went to college late in life, and she had a career in addition to having a family,” Havlicek said. “She was ahead of the curve by several decades.”

Zona and Romano still take three trips per year, two to Bermuda and one to Italy, and were planning a late July cruise. Their plans are on hold amid the coronavirus outbreak, Romano said.

Meanwhile, the pair has stayed home to stay healthy, receiving meals through the town senior service department and essentials through online shopping. Romano sends town staffers updates on how they have been faring during the pandemic, including pictures of Zona performing yoga moves.

The town is busy providing 2,300 meals per week to seniors like Zona and Romano, but Frangione noted many are lonely without the daily interaction of the senior and adult day care centers.

“It’s tough and, boy, do we miss them,” Frangione said. “It’s wonderful to see Rosie here.”

When asked what it takes to live such a long full life, Zona said the answer is quite simple.

“Be good to everybody and love,” she said. “Love is the big secret.”

A 107-year-old and her cabbie: The tale of 'Rosie' and 'Boom Boom'Alan Mancini drives a lot of customers around Long Island. But what he has with "Rosie" and her longtime friend Mary Ann is different. They're 106 and 107, and remember the 1918 flu pandemic"The funeral parlors were all full, there was no more room." For Dorothy Sellers and Rosalia Zona, coronavirus brings back painful memories of the global influenza pandemic of 1918 when 675,000 died just in the U.S.