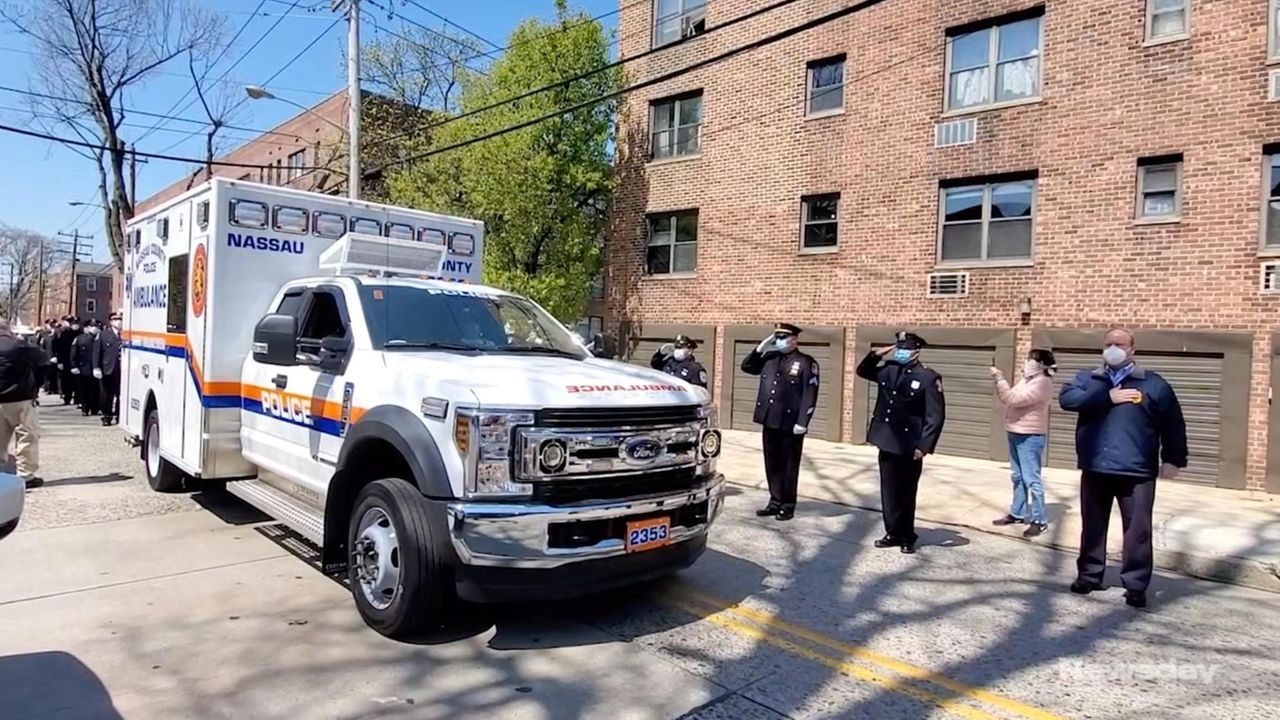 Police officers lined the streets outside NYU Winthrop Hospital in Mineola to honor Sands Point police Sgt. Joseph Spinosa, who passed way after battling the coronavirus, as his body was transported from the hospital to Wagner Funeral Home in Hicksville on Sunday.  Credit: James Carbone

Police and other first responders paid tribute Sunday to Sands Point police Sgt. Joseph Spinosa — believed to be the first member of a Long Island law-enforcement agency to die after contracting the coronavirus — with a motorcade that picked up his body at the hospital where he passed away and delivered it to the funeral home where it will be prepared for interment.

Sands Point Chief Thomas Ruehle said the procession, which included scores of patrol cars and motorcycles from the Nassau County police, Suffolk County police and the NYPD as well as Spinosa’s Sands Point colleagues, represented an effort to provide the veteran cop with a full tribute at a time when large gatherings are banned.

“He deserves all this,” Ruehle said before Sunday’s motorcade. “It is a really surreal time, and I hope we do him justice.”

Spinosa, 52, died Wednesday at NYU Winthrop Hospital in Mineola after testing positive two weeks earlier for the coronavirus and pneumonia, officials said. It is unclear how Spinosa contracted the coronavirus but his passing has been classified as a line-of-duty death, the first in the 100-year-history of the department.

Police departments often stage large memorial services for officers who die in the line of duty that draw thousands of cops and other first responders from around the nation. The coronavirus pandemic has made that kind of memorial difficult, and Ruehle said his officers will have to pay their respects to a beloved colleague without a proper wake or a funeral Mass.

Cops from Long Island and the rest of New York State gathered at the hospital in Mineola before noon Sunday. An American flag was draped over Spinosa’s coffin and the Rev. Joseph D’Angelo, the Nassau police chaplain, said a prayer for the fallen officer. A bagpiper played mournfully off to the side and then Spinosa’s coffin was placed in a Nassau police ambulance.

The motorcade proceeded to Hicksville, first to the home Spinosa shared with his 78-year-old mother, Carol Spinosa, then to the Vernon C. Wagner Funeral Home.

“She will always be part of our family,” the chief said.

The motorcade, accompanied by a Nassau police helicopter, passed under bridges decorated with American flags by Long Island fire departments.

Another motorcade will accompany Spinosa’s body Tuesday to a cemetery in Duchess County, where the 19-year Sands Point police veteran will be laid to rest in a private cemetery.

Spinosa was a big man with an even bigger heart, and Ruehle said his department has been overwhelmed with messages from Sands Point residents offering their condolences.

“He didn’t have a mean bone in his body,” Ruehle said. “He was the perfect sergeant.”

Ruehle thanked Nassau police for their assistance in honoring Spinosa. Spinosa may have worked for a different department, Ruehle said, but Nassau police have treated him like a brother. “We are all on the same team,” Ruehle said.

“Police officers are a united brotherhood ... whether it is fighting an invisible enemy like coronavirus or curbing crime in our communities, the men and women in blue never fail to perform their duties and help our residents remain safe,” Nassau County Police Benevolent Association president Jim McDermott said.

Added Suffolk County Police Benevolent Association president Noel Di Gerolamo: “The death of Sgt. Spinosa is a tragedy and a sobering reminder of the inherent dangers faced by police officers on the front line of the coronavirus battle. Today the entire law enforcement community grieves as one with the Sands Point Police Department and residents he honorably served.”