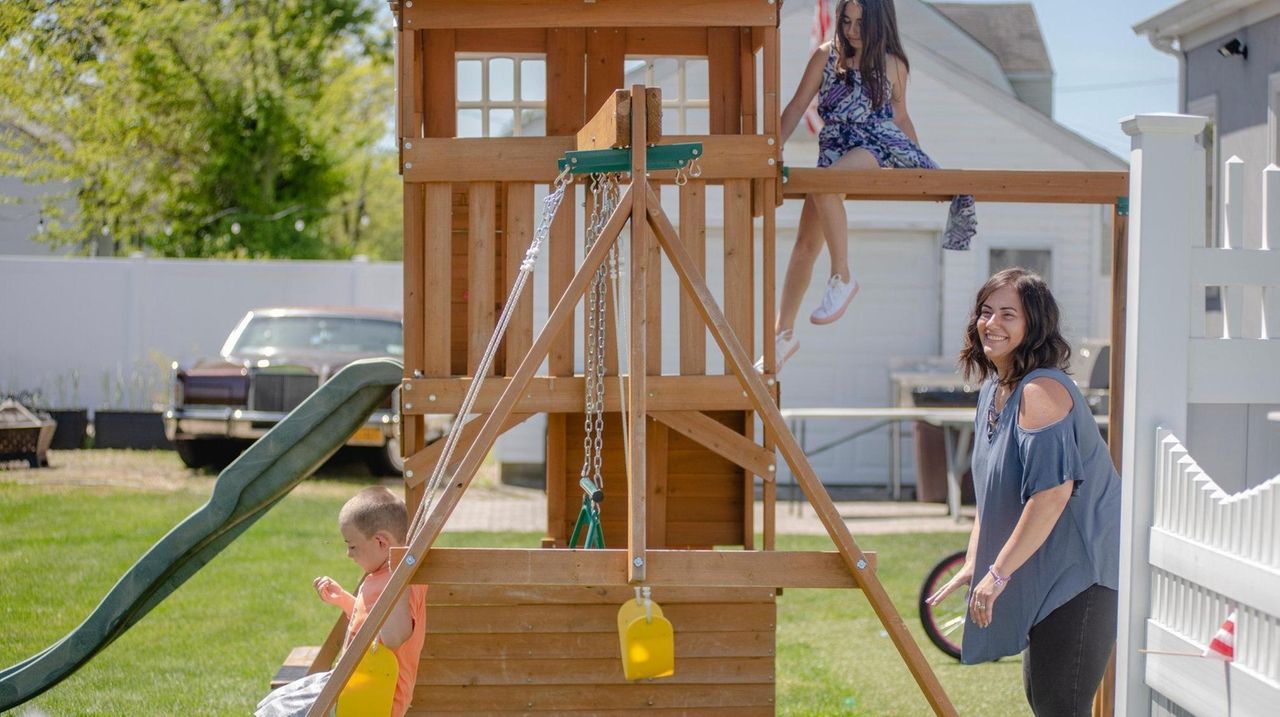 For some LIers the shutdown has been a time for big savings. Families living paycheck to paycheck before the coronavirus outbreak say they've been able to put aside money they couldn't before the pandemic-related closures.   Credit: Newsday / Daysi Calavia-Robertson

The monthslong shutdown of the local economy has given many Long Islanders a unique opportunity: the chance to save and pay down debt. Thousands of others across the Island have lost  much of their income to the pandemic and are struggling financially, but this lucky group is able to save money now that there are so few options for spending.

Many families in the region — an area that routinely appears on lists of the most expensive places to live in America — say having their expenses forcibly cut by government measures aimed at slowing the virus' spread has helped them save several thousand dollars a month.

A handful of others say their businesses have seen an increase in revenue, allowing them to  put aside money toward a dream vacation or down payment on a home.

"It's 'forced savings,' " Richard Vogel, dean of the school of business and professor of economics at Farmingdale State College, said.

"People can't commute, so there's no need to pay for train passes or gas, they're not dining out at restaurants, they're not out shopping... people's choices are very limited right now because there aren't that many places to go out and spend."

These savings are the unintended benefits of the closures, Vogel said. "It's created a nice silver lining, for people who've been fortunate enough to not lose their jobs," he said.

Gregory DeFreitas, senior labor economics professor at Hofstra University and director of the Center for Labor and Democracy, said Long Islanders who have been able to save during this time could be "essential workers or people who can work from home and are telecommuting, and most are middle class or upper middle class."

"It's totally rational from an economic standpoint for those who are able to, to save as much money as they can during this time," DeFreitas said, adding that during a recession or a crisis, individuals tend to become more conservative with their money, both expenditures and savings.

Nationally, the personal savings rate reached a historic 33% in April, according to the U.S. Bureau of Economic Analysis. This rate — how much people save as a percentage of their disposable income — is by far the highest since the 1960s, when the department started tracking it.

Even so, DeFreitas and Vogel said it's important to remember this is not the case for the millions of Americans whose livelihoods have been disrupted by the pandemic.

"Most people are not in this group, a lot of them are really hurting," DeFreitas said. "And while people who are able to, are saving right now or using their savings to pay down debt, others may actually be accruing debt by using credit cards to cover expenses they normally paid for with money they earned working."

Nearly 21 million Americans are classified as unemployed, and that may be an undercount, the U.S. Labor Department says.

This month Rachel and Nicole Lavoie, of Floral Park, have been able to pay $1,000 toward their nearly $5,000 credit card debt. The married couple, who are parents to a 5-year-old girl and 14-month-old boy, ran up their balance using their credit card to help pay for day care.

The Lavoies, who were spending more than $2,800 a month on day care, said they wouldn't have been able to make such a large payment toward their credit card bill if it weren't for the recent savings forced by the shutdown.

"This year we began paying for day care for the two of them, so we started getting into debt because of it, which we expected, but figured we'd start getting out of the hole in the fall when our eldest started kindergarten," Rachel Lavoie said.

The children have not attended day care since March 16 but Rachel, a mental health therapist, and Nicole, who works in finance, have continued paying half of their tuition to hold their spots.

Saving $1,400 off the day care bill, paired with monthly savings of about $350 on their daughter's nixed dance and swim classes, $100 on their son's canceled mommy-and-me music classes, and $300 they would normally spend  on lunches and coffees out  during the workweek, the Lavoies were finally able to start putting a dent  in their debt.

"It's wonderful, but at the same time it's not so wonderful," Rachel said, "mostly because we realize that we're saving money at the expense of businesses we had been supporting.  So, we feel guilty about it even as we appreciate the bit of financial relief."

Despite being out of work, Ronkonkoma residents Jennifer and Steven Mitrano, parents of a 4-year-old and 2-year-old, have been able to save almost $3,000 a month since the start of the pandemic, savings the couple used to pay off credit card debt.

"Right now, our credit card balances are at zero," said Jennifer, who works as a visual merchandiser at furniture retail chain Raymour & Flanigan.

"Before this, we were living paycheck to paycheck, and it was tough. For the first time, I feel like I'm on the other side of the struggle."

For two weeks after store closures began, Raymour & Flanigan paid employees 50% of their incomes. The company also waived 401(k) withdrawal fees and both Jennifer and Steven, who also works for the chain as a store manager, took out a small amount "just in case."

Soon after, the Mitranos were furloughed and now they each collect $900 a week in unemployment benefits.

They stopped sending their kids to day care, eliminating $1,800 a month in child care costs; stopped  ordering out as frequently; said bye to cable, instead opting for a Fire TV Stick streaming device, and called their insurance company and other creditors to ask about possible money-saving changes to their accounts.

"We negotiated longer terms for the loan on one car and the lease on the other, and reached out to Geico, which lowered our rate by about $60 a month after we explained we aren't driving much at all now," Jennifer said.

All those things allowed the couple to pay off their debt, she said. "What I hope people take away from this is that we're killing ourselves just to survive, pandemic or not."

Elissa Costanza, 29, of West Babylon, said a combination of increased revenue for her company, travel plans curbed by the virus, and sliced living expenses have helped her save about $5,000 a month.

Costanza said her business, She Does Credit LLC, which provides credit restoration  counseling, has "nearly tripled as more and more people try to get their finances in order."  She has also canceled trips and stopped eating on-the-go, shopping for clothes and spending money on commuting.

"Now more than ever, people are cognizant of where every penny is going and want to well position themselves financially," she said.

Working a side hustle

Kelly Pashalidis, a manager at a Queens dental office, says her children have always dreamed of going to Disney World, and their wish is closer to coming true now, as her side hustle selling nail polish strips is booming.

"Since the start of all this, with the stay-at-home order and nail salons closed, my ... business just took off," said Pashalidis, of Bellmore. "It was pretty crazy, but suddenly everyone wanted the strips, and my sales increased about 200%."

The adhesive strips are applied to nails, giving the look of nail polish.

Pashalidis, who sells Color Street nail strips, primarily through her "Kelly's Manicure in Minutes" Facebook page, said about 20 women inquired about and later signed on as sales  reps for Clifton, New Jersey-based Color Street. The more reps on her sales team, the more she makes.

Pashalidis and her husband, who manages construction projects and has been working from home, have saved about $3,000 a month thanks to the influx of income from Kelly's sales and their reduced living expenses.

"At first I felt guilty promoting my nail polish business because of everything happening with the virus, so I donated nail polish sets to nurses and doctors on the front lines. Many were grateful, because they said for just a little bit they could forget all the bad and enjoy how good doing something nice for themselves felt," she said.

"It's been such a difficult time for the whole nation and world, people have been sick, people have died ... it doesn't take away from all the bad, but maybe something good can come out of this, too."

Supriya Kavi, 40, a New Hyde Park mother of two who works at a financial firm in Manhattan, said with the elimination of her commuting costs and her husband's out-of-pocket travel expenses  as a pharmaceutical rep who traveled weekly, the family is saving $3,000 a month.

The savings include "the LIRR, the subway, Ubers, taxis, flights, all of our combined transportation costs," she said. "We're saving another $2,300 a month in day care expenses. Those two expenses alone have now turned into big savings for us; before all this we could hardly save any money at all."

Now, Kavi said, she and her husband,  who've both continued working from home, are able to save about 60% of their paychecks.

They've even had enough money to donate. The couple pulled $1,000 from their savings to give to charities like UNICEF and contribute to the GoFundMe accounts of struggling local businesses, Kavi said.

"We live in a small, two-bedroom home and were hoping to one day be able to move into a place where our kids could each have their own room," she said.

"It was our five-year plan, but now that we've saved in three months what we would've saved in more than a year, I'm hopeful we could maybe look into the possibility of a larger place by next year or so."

Nicole Casey, who works at a Manhattan IT firm, and her husband Tim, a financial adviser at Wells Fargo, said they're planning to use the nearly $3,000 a month they've been able to save while working from home in Floral Park toward the down payment for their first home.

For the past two years, Casey, Tim and their  two sons, 17 months and 8 months, have been living in an  apartment the family rents from her grandmother.

"If we were still paying the $1,300 a month for day care, close to $750 in commuting costs between the two of us, and about $250 on lunches out, grooming services like nails, hair, etc., that are needed when you work in a professional environment, we wouldn't be able to save as much," she said.

"Being able to save this money is bringing us closer to our goal of buying a house that much sooner. I feel extremely lucky to be able to save right now during these crazy times."