Fire Island crowds complied with orders and dispersed when Suffolk Police’s Marine Bureau arrived in response to complaints over the weekend, Bellone said. But the crowds came back after the officers left and “were again flouting orders," he said.

With Long Island on the cusp of Wednesday's Phase 4 reopening, Bellone described the behavior of those continuing to flaunt mask and social-distancing rules as "disturbing and unacceptable."

"It is a slap in the face to all of the people who have sacrificed and brought us to this point," Bellone said during his Monday update on the coronavirus.

Bellone's announcement came after Gov. Andrew M. Cuomo on Monday again expressed his frustration at New Yorkers who continue to ignore his executive orders in place to help prevent the spread of COVID-19.

“The last thing we need is to see this virus spike again,” Cuomo said during a morning news briefing in Manhattan. “You look at the festivities around July Fourth. You see gatherings that are not socially distant. You see it on Manhattan. You see it on Fire Island. I don’t know how else to say it. Actions have consequences.”

Cuomo said he plans to once again speak with local governments in the state about enforcement.

"I understand it is not politically pleasant to enforce the mask law or the gathering law or the social distance law," Cuomo said. "I get that politically it's difficult for local governments to do it, but it is the law and if we don’t do it, it's going to be a serious problem."

There are no current plans to shutter Fire Island beaches, Bellone said in a CNN appearance.

Nassau responded to 68 complaints of overcrowding or lack of compliance with social distancing rules over the holiday weekend, resulting in 16 warnings, said County Executive Laura Curran. Three appearance tickets were issued to an Island Park restaurant for alleged fire code and social distancing violations. Nassau officials said the county does not name businesses until after cases have been adjudicated.

“Most people get it, most people comply, which is why when you have 68 complaints, we just end up with three appearance tickets, because most people do get it,” Curran said. 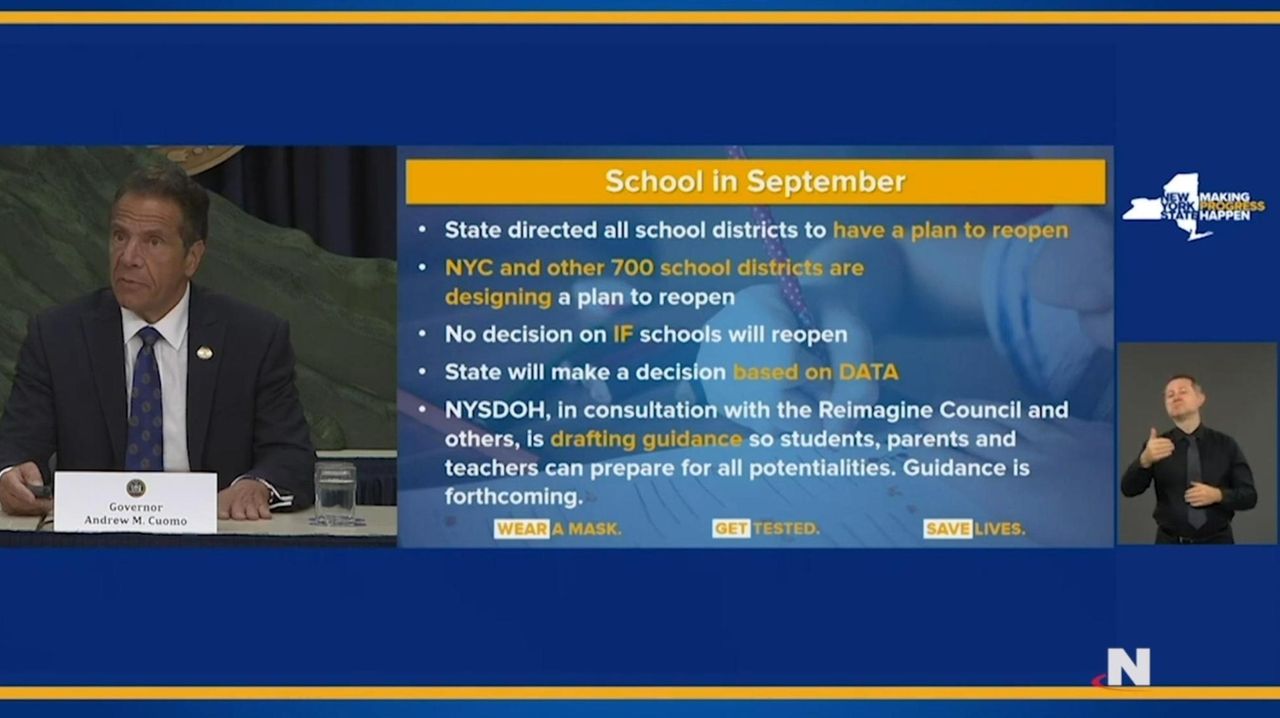 Cuomo: LI on track for Phase 4, school openings still unclear Gov. Andrew M. Cuomo on Monday said Long Island is on track for Phase 4 of reopening but also expressed frustration that some New Yorkers continue to ignore state laws on social distancing, large gatherings and the wearing of protective masks. Credit: Office of the Governor

In addition, there were 1,231 fireworks complaints filed In Nassau between July 3 and 5, officials said, with seven arrests in the county because of illegal fireworks use.

The number of COVID-19 cases, hospitalizations and other important metrics have continued to decline in the state.

Cuomo said 817 people are hospitalized with COVID-19 across the state — the lowest number since March 18. And the rate of infection, according to 54,000 tests done Sunday, was less than 1%, he said.

Nine people died from COVID-19 on Sunday, he said. That’s a slight uptick from eight on Saturday and a decrease from 11 on Friday.

Nassau and Suffolk each reported 43 new positive cases of COVID-19 Monday. Nassau had no new deaths, but Suffolk had one, the county executives said.

Northwell Health on Monday said it was down to 131 COVID-19 patients at the 19 hospitals it owns and operates, a decrease from around 155 early last week.

Those numbers are in stark contrast to the 3,400 patients Northwell — the largest health system in the state — cared for during the pandemic's regional peak in the first half of April.

The health system reported only one death over the last 24 hours. Northwell hasn't reported a death on Long Island since July 2.

Cuomo said schools across New York State are readying plans to reopen, but it’s still unclear whether they will welcome students in the fall.

“Every school district is coming up with a plan to reopen,” Cuomo said. “That doesn’t mean they are reopening.”

"This is a really tough one," he said. "We have a fantastic state fair in Syracuse … it's been an economic boon for the entire region."