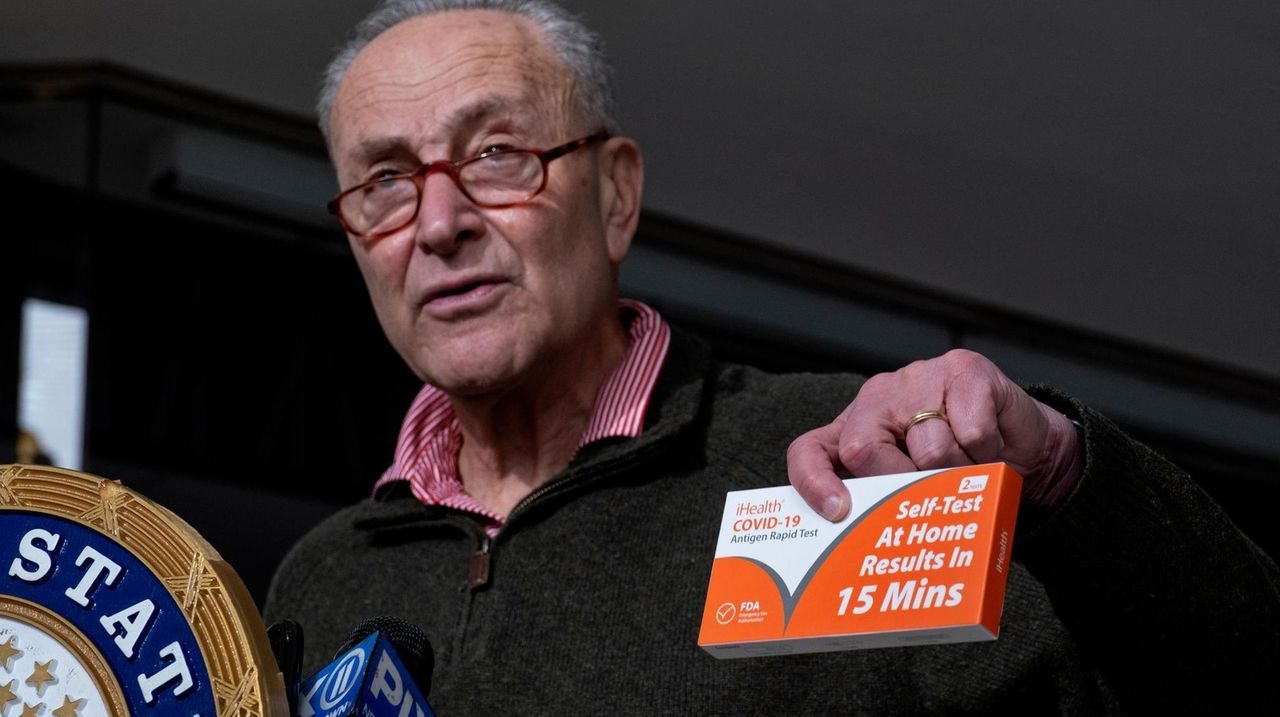 To do that, said Schumer (D-N.Y.), the U.S. Department of Health and Human Services must ease access to the tests as soon as possible at community health centers and mobile sites on Long Island and around the state.

His proposal came days after President Joe Biden announced a winter plan to combat the variant, including requiring insurance companies to reimburse for at-home rapid test purchases and increasing the number distributed to community health centers and rural clinics.

"Let's get them out quickly," Schumer said at a news conference in Manhattan, "because it'll cost a lot less to get people tested now and stop omicron in its tracks than it will be to delay and let it spread and spread and spread before we can really get a handle."

Schumer said he wants the at-home tests available at health centers before Jan. 15, when federal agencies are expected to issue guidance on the insurance reimbursement. People who cannot afford to pay for the tests before reimbursement, who lack insurance or don't want to deal with the headache of filing insurance claims, may not end up accessing them otherwise, the senator said.

He cited New York State as having the most reported omicron cases in the country.

There are more than 800 community health center locations in the state, according to the Community Health Care Association of New York.

Representatives for both organizations did not immediately respond to a request for comment Sunday.

On Long Island, the overall COVID-19 infection rate continued to inch up, according to data released by Gov. Kathy Hochul Sunday. The region's seven-day average rate of positivity in tests Saturday was 5.95%, up from 5.9% the day before. More than 2,000 people tested positive Saturday: 926 in Nassau and 1,112 in Suffolk. Two Long Islanders, one from each county, died.

Dr. Francis Collins, director of the National Institutes of Health, which is an agency of the HHS, said health officials are working to send 50 million free at-home tests to health centers and food banks.

Biden announced in September that officials would provide 25 million free at-home tests, and he doubled that commitment Thursday as part of his announcement of a winter plan to combat omicron, according to the White House.

On Sunday, Collins told NBC’s Meet The Press that the NIH is also running pilot tests in seven states for free online ordering of new rapid tests on Amazon.com.

"We ought to have testing as easily accessible as possible and as cheap as possible, because it is a good way to protect yourself," Collins said.

Rapid tests provide results within about 15 minutes, less time than the 24- to 48-hour turnaround times for traditional tests. The tests are available over the counter at CVS and Walgreens for between $10 and $125, according to those chains' websites.

Schumer said the HHS could provide the tests using $50 billion it received for testing and tracing in the American Rescue Plan.

HHS did not immediately respond to a request for comment Sunday.