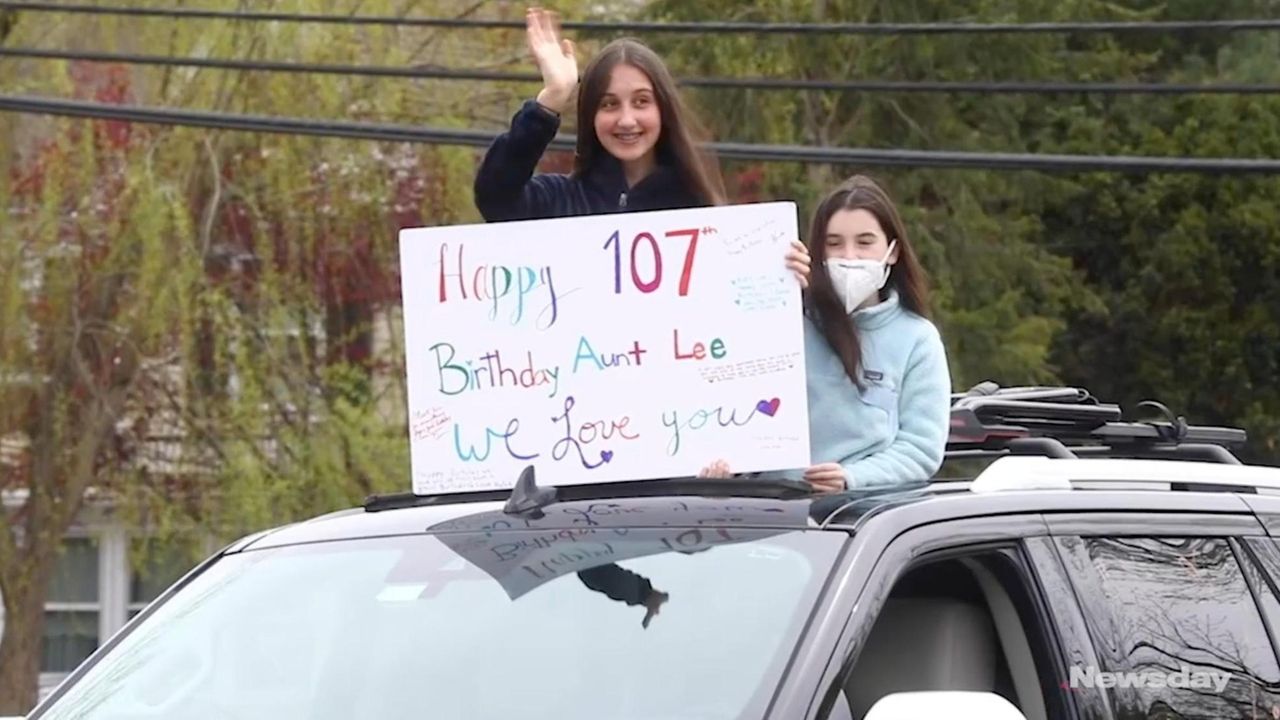 Sister Francis Piscatella lived through both world wars, the Great Depression, the invention of the internet and the turn of the century.

She celebrated birthday number 107 Monday during another historic time — the COVID-19 pandemic.

Although the deadly virus kept Piscatella from being treated by her family to a celebratory dinner of veal meatballs and veal piccata at her favorite Italian restaurant in Westbury, it didn’t stop her from smiling and waving out a window to relatives and friends gathered Monday outside her East Williston apartment.

“We can’t be with her,” said Cynthia Grimley, of Kings Park, her voice cracking while she spoke of her great aunt. “We wanted to drive by and say hi. … It’s really great that so many people came out."

As Piscatella’s relatives and friends drove by, many honked their horns and held up signs such as “Happy 107.” Others stood on her front lawn wearing masks and clapping for the sprightly centenarian.

Piscatella is a nun with the Sisters of St. Dominic of Amityville and a retired math teacher, relatives said, born and raised in Central Islip, one of seven siblings.

Her nephew, Philip Piscatella Jr., said she entered the convent at 16 and later earned a master’s degree in math from St. John’s University. She taught statistics at Molloy College in Rockville Centre, he said.

And although many of her contemporaries have passed away, even at 107, Francis Piscatella has a zest for life.

His wife, Marie, 70, said Francis Piscatella is the “healthiest person you can meet on this planet.”

She noted that Piscatella is able to get around without the aid of a walker or cane, is not on oxygen and takes no medications.

“She’s like a walking miracle,” Marie Piscatella said. “... She’s extremely healthy and extremely religious. Maybe she has something that everybody needs a lot of — faith.”

Francis Piscatella’s loved ones said the only precaution she has taken during the coronavirus pandemic is remaining indoors. She shares the East Williston apartment with another nun and has not gone outside since March 5, Grimley said.

When it’s safe enough to gather as a family again, Grimley said, she can’t wait to give her great aunt a hug.