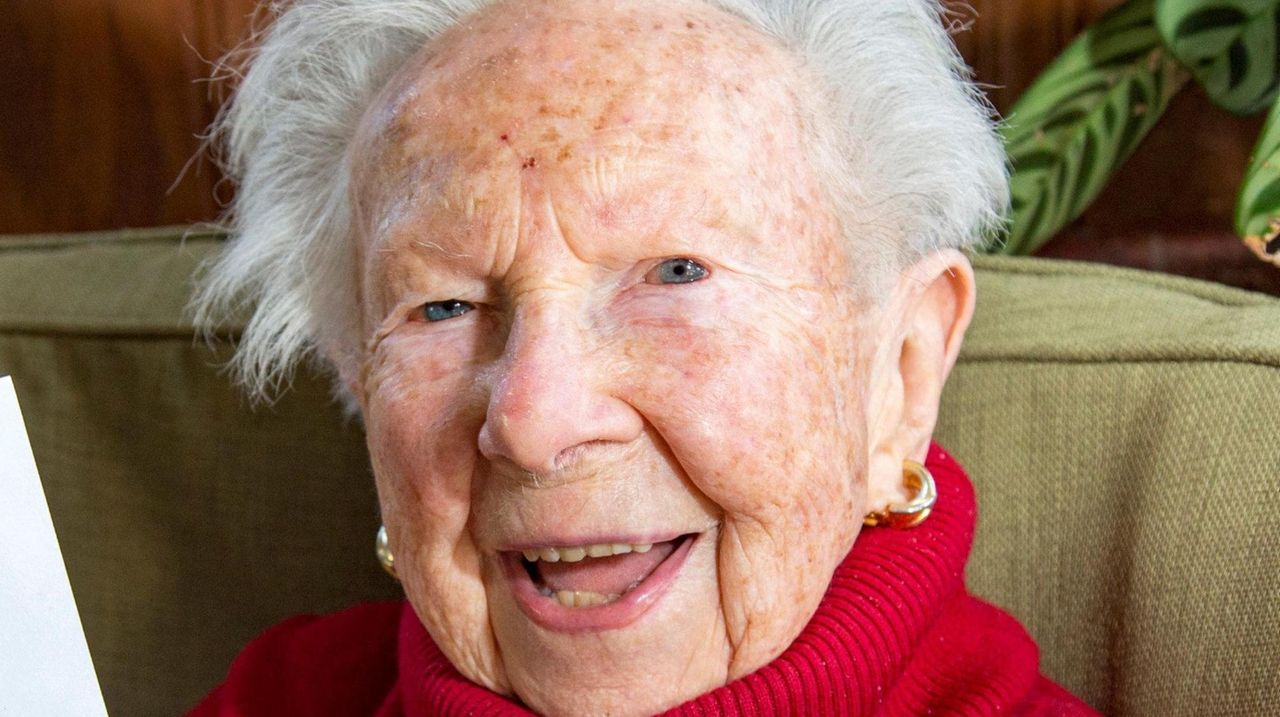 Dorothy Sellers, 106, who survived the 1918 influenza epidemic called the Spanish Flu, shared memories of the crisis and reflected on the coronavirus pandemic with Newsday on Wednesday. Credit: Newsday

The memories are back. Like the big white tent that went up a century ago outside her small Pennsylvania town, which she first thought was for a circus.

Many people disappeared into that tent, never to come back.

"There was a big platform built with a huge tent with cots," said Sellers, 106. "When people got the flu nobody could visit them."

For Sellers, the novel coronavirus, with its stunning ability to grind so much of daily life to an abrupt halt worldwide, has conjured up the dark mood of that time so long ago. Just like then, Sellers has had the same reaction now.

"It scares me," she said. "The fact that everything is closed. People are told not to go visiting, and not to do anything outside their own little corner of the world."

The 1918 pandemic, more commonly known as the Spanish Flu, and among the deadliest in human history, killed more people than in all of World War I, which was tearing Western Europe apart at the same time.

The figures are almost unimaginable: 500 million people, or one-third of the world's population, were infected, with an estimated 50 million killed, according to the Centers for Disease Control and Prevention. It killed 675,000 in the United States alone. It killed people so quickly and in such numbers that hospitals ran out of beds, forcing the creation of mobile tent hospitals. Undertakers ran out of coffins. People buried their own dead, sometimes in mass graves.

It killed in sometimes tortuous ways, rupturing mucous membranes and making people bleed from their eyes, mouth and nose. Many people died within hours of showing symptoms, and the huge movement of troops and tight living conditions of trench warfare only spread it more rapidly.

Rosalia Zona was about 6 at the time of the 1918 pandemic. The Huntington Station resident said she still remembered seeing the effects of it while living on 10th Avenue in Manhattan.

Zona is 107 now and can recall some of what life was like during that time: an abundance of death. People grasping at potential preventions and cures.

“The funeral parlors were all full, there was no more room,” she said in a phone interview Tuesday, with her longtime friend and housemate, Mary Ann Romano, by her side.

Zona said there were “coffins on the sidewalk” and stacked in her neighborhood because of the multitude of deaths.

“I remember it very vividly,” she added.

Her mother, she said, loaded up on one product that at the time was thought to prevent the flu or fight it — garlic.

“They told everybody the good thing to do is put garlic around your neck,” Zona recalled. “My mother … put holes on [garlic cloves], and put them around a string around my neck.”

More than any single memory, Sellers said, she recalls an overall mood back then, dark and heavy and seeping into daily life.

"It was background stuff," she said Wednesday from the couch in her house with a white picket fence. "When somebody mentioned flu, I knew that was a bad subject. It made everybody sad."

Sellers' home was in a wooded area in Connellsville. The town became known as the "Coke Capital of the World" due to the amount and quality of coke produced there. Coke is a solid substance obtained from coal and used as a fuel.

Western Pennsylvania suffered terribly during the pandemic. Pittsburgh had one of the highest death rates from the flu of any city in the nation, according to the CDC.

For Sellers, the toll of the pandemic hit home with the sickness of her "Uncle Bill," who had recently come home from military service.

"It was very sad when he died," Sellers said. Newly married, the man was not an actual relative, but a friend of her father.

"He was young," she said. "He came home from the war and he got the flu and he died."

New York City experienced a relatively low death rate for a major city, according to the New York City Department of Records and Information Services. Residents were used to public health interventions by 1918, since local authorities had orchestrated a 20-year campaign against tuberculosis.

Zona remains relatively active and in good health. Before the coronavirus took hold, she would take cab rides to the Huntington Senior Center and to the hairdresser. She enjoyed going on vacation.

Since Feb. 14, as the outbreak expanded, Zona — who has the heart-valve disease, aortic stenosis — has stayed home in Huntington Station to avoid getting sick.

Sellers is doing the same in Freeport. An aide comes in once a day to take care of the flowers and help her with shopping. The aide also dresses and treats her partially removed skin cancer, she said. Her doctor is supposed to remove the rest on March 31, but that might be postponed, she said.

Sellers has lived through 18 presidents. She gets around with a cane, and stopped driving at age 102.

When she moved to Long Island in the 1930s to live with an aunt in Floral Park, Jones Beach had just opened. Sellers got a job at Seagram's, the whiskey company, and rose as high as a woman could back then. She was assistant to the company president, taking care of much of his personal business.

Sellers was supposed to attend a St. Patrick's Day get-together Tuesday, but that was canceled at the last minute.

"The host brought the dinner right to my own table," Sellers said. "Just the two of us."